It appears that UK citizens are less interested than much of western Europe when it comes to applying to MBA programs. TopMBA.com finds out why.

Although the number of UK citizens who took the GMAT (Graduate Management Admission Test) in the 2010 testing year remained high, when comparing the figures to population statistics from the United Nations (see graph), the take up of graduate management education in the UK is lower than in many other western European countries.

The UK as an international MBA destination

With London Business School topping the most recent Financial Times MBA ranking, and eight of the top 20 European QS Global 200 Top Business Schools based in the UK, the relative lack of enthusiasm for graduate management education amongst UK citizens will come as a surprise to many. 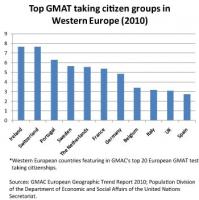 Séan Rickard, director of Cranfield School of Management's full-time MBA program explains to TopMBA.com that he was surprised to see the UK feature below 'up and coming' destinations such as Germany in the list of GMAT taking citizen groups. However, the greater emphasis on the importance of undergraduate education within countries such as Ireland is likely to have a knock-on effect on the take up of graduate management education, such as MBA programs.

Rickard also feels that the UK often fails to recognize the value and importance of management education.

"There is a tendency [in the UK] to look down your nose on people who have studied management," he points out. "The UK seems to have the attitude that we're best at everything, however our economic performance is not good within Europe... I attach that almost exclusively to a lack of quality management."

Explaining that although the GMAT is often considered to be the main admissions test for MBA programs, Jane Delbene, GMAC's director of marketing for Europe, Middle East and Africa, is keen to make clear that the exam can also be used to evaluate applicants to other graduate management programs, not just MBAs.

"This is the case in Germany, for example, where much of the growth in tests taken can be attributed to the growth in masters programs using the GMAT exam."

However, as Rickard points out, particularly in western Europe the GMAT is commonly considered to be the major MBA entrance exam, and for the most part, test-taking trends can go a large way in representing the amount of interest in MBA programs.

Veronica Hope-Hailey, associate dean of MBA programs and professor of strategic human resource management at Cass Business School, City University London, says that the good reputation of undergraduate business and management education, and until recently, a preference amongst UK citizens to study within the UK could lessen the desire to enroll on graduate management programs.

"The British university system has enjoyed a high reputation for generating quality graduates for whom the quality of their undergraduate degree often secures good employment prospects," Hope-Hailey says. "[The UK has] also been producing large numbers of quality graduates in both management and business for some decades and for them, studying an MBA program [soon] after graduation may not make sense."

Tuition fees and the UK's fear of debt

Debt may also be a factor dissuading UK citizens from enrolling on MBA programs, especially so as undergraduate program fees have witnessed much media coverage in the UK press after both the current and previous governments chose to allow institutions to charge higher tuition fees.

While undergraduate fee increases did not directly affect MBA program costs in the UK, the debt already amassed by possible MBA applicants could dissuade many UK citizens from considering applying to programs that can cost upwards of GBP£30,000.

"UK citizen's reservations to pursuing graduate management education are slightly different from all other Europeans," points out Delbene at GMAC, referring to the organization's MBA.com Prospective Students Survey. "Where the leading reservations to business school globally are financial concerns, a greater percentage of UK citizens appear to be concerned about money, when compared with all Europeans, about having to take on large debt and possibly not having available money needed."

However, when looking at the achievable salary figures of MBA graduates and alumni, the return on investment of an MBA qualification from a top business school is high.

"UK citizens considering business school might calculate their personal return on investment (ROI), and weigh the costs against the higher salary and greater opportunities over the course of their career with an MBA," explains Delbene.