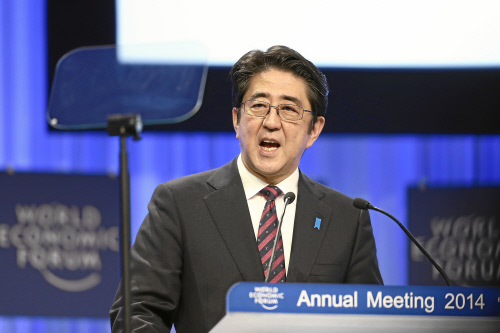 Japan’s Prime Minister, Shinzo Abe, has mapped out his desire for the proportion of women in leadership positions to reach 30% of his country’s top management roles by 2020.

“Japan must become a place where women shine,” said Abe, a participant at this year’s annual meeting of the World Economic Forum, held in Switzerland.

Shinzo Abe expressed pride in his belief that Japan’s economy has now turned a corner, pointing to an anticipated rise in wages and consumption in 2014, as heralding the possibilities of a new dawn.

However, the prime minister admitted that Japan’s corporate culture is currently too male-dominated and demands greater opportunity for women in leadership, not least because of the country’s falling birth rate and subsequent ageing population.

Referring to corporate culture as ‘a world of pinstripes and button-downs’ Shinzo Abe said, “Japan’s female labor force is the economy’s most underused resource.”

In outlining his plans to develop and foster greater opportunities for women in leadership, Abe touched on his government’s intentions to enact legal reforms and instill a more flexible working environment that will promote women in leadership as well as to encourage foreign workers to contribute towards Japan’s domestic and personal services.

Shinzo Abe also voiced his desire to achieve a better level of understanding between Asian governments to avoid tensions that might present obstacles to the region’s future growth.

“With Asia becoming the engine driving the world economy, the need to achieve lasting peace and prosperity has never been greater, because the global knock-on effect of any threat to regional stability would be enormous,” he said.

The World Economic Forum and ‘The Reshaping of the World’

This year’s annual meeting of the World Economic Forum has a thematic focus titled, ‘The Reshaping of the World: Consequences for Society, Politics and Business’. Its stated aim is to “develop the insights, initiatives and actions necessary to respond to current and emerging challenges,” according to the organization’s website.

For those interested in following highlights from the World Economic Forum’s annual meeting, KPMG International’s social media site collating and streaming the live feed of tweets sent by its participants is a handy tool. Suitable for both web and mobile interaction, it aims to provide an easy way to stay abreast of key statistics and trends emanating from the event and the discussions surrounding it.

The KPMG site also shows who the leading influences are among the World Economic Forum’s participants in terms of their social media activity. One of the European Commission’s vice-presidents, Neelie Kroes, currently leads the way, ahead of Mexico’s president, Enrique Peña Nieto.

Among business leaders in attendance, Yoshito Hori, managing director at Globis Capital and the founder and president of GLOBIS University Graduate School of Management is leading the influence stakes at the time of writing.