The number of MBA jobs in Asia, as indicated by the QS TopMBA.com Jobs & Salary Report 2013/14, highlights the region’s continuing appetite for MBA recruitment. Asia tops this year’s growth in demand charts with an increase in opportunities of 20% over the past year.

Globally, employer demand for MBAs is up by 14%, and now looks to have moved firmly past the turbulence of a few years ago (brought on, in large part, by the financial downturn) in that it marks the second successive year of stable growth in line with the annual average rise of 15% since QS first started to produce the world’s largest employer survey of MBA jobs in 1990.

“14% growth is very strong – it demonstrates the underlying health of the MBA. What’s interesting is that since the financial crisis of 2007/8, we did see a drop off in demand in the immediate two years afterwards, but the recovery has been more rapid than in previous cyclical downturns”, says Nunzio Quacquarelli, QS founder and managing director, and editor of this year’s report.

The increasing emergence and recognition of the MBA in Asia has seen the number of equivalent opportunities soar. This year, the growth in the number of MBA jobs in India and China stand out in particular.

“It is abundantly clear that the emerging worldwide economy is now vibrant with possibility for Asian businesses”, says professor Tom Robertson, dean of The Wharton School.

The trend for Asian companies, both multinational and local, to seek out MBAs as they pursue global expansion continues and shows no sign of slowing down, with an even larger 38% rise in opportunities forecasted for the coming year.

Nowhere has growth in 2013 been larger than in China, which experienced an explosive 35% rise in MBA opportunities, moving from fifth to third position in terms of the volume of job opportunities.

Meanwhile, the huge year-on-year increases in MBA jobs in India that have taken place in the past few years continue, with a 29% increase, far in excess of last year’s 16% rise.

Elsewhere, there were notable rises in the number of jobs in Asia available to MBAs in South Korea, where the presence of big multinationals like Samsung and Hyundai has fuelled a 20% increase, and even in Japan, where companies have a history of sponsoring students to pursue MBAs at Western business schools, saw a rise in demand of 17% this year.

Emerging markets for MBA jobs in Latin America, the Middle East and Africa have all seen some positive growth in employer demand in 2012/2013, something that looks set to continue in the near-future.

Latin America’s overall growth of 6% (driven largely by Mexico, Brazil and Argentina) comes with a 9% forecast for 2013/2014 as companies increasingly see MBAs as the people required to internationalize across the region.

The Middle East has slowed its remarkable 21% growth of 2011/12 to a more measured 8% in 2012/2013. Demand is greatest in Saudi Arabia and the United Arab Emirates, although parts of Africa have also reported increased demand, albeit from a relatively low base.

Dr Abdulkader Alfantookh, vice-minister of higher education in Saudi Arabia says, “We are still in the early stages of becoming a knowledge economy, but Saudi Arabia is investing in scholarships for 40,000 students a year to study undergraduate, Masters and MBA degrees overseas, and we expect them to bring their knowledge back to companies within Saudi.”

Growth in these emerging markets is likely to continue, not only due to the presence of multinationals, but also as the qualification is increasingly accepted and embraced within these regions, as is the case in Asia.

Western European jobs at MBA-level teetering on brink of recovery

2012/2013 has seen a growth in the number of Western European jobs available to MBAs in Germany, UK and Scandinavia as well as in Italy, where a strong performance by the automotive sector gave rise to an unexpected MBA growth of 12%.

However, when those hit the hardest by the Eurozone crisis (Greece, Spain and Ireland) are encompassed, the region as a whole is left with an overall growth of just 1%. Austerity measures there taking their toll on local employers in particular.

In spite of this, European employers are cautiously optimistic about the future, underlined by a forecast of 6% growth next year.

Germany and the UK will undoubtedly spearhead any major increase in Western European jobs next year. 2013, for instance, has already seen the demand for German goods in Asia create increased demand among German companies for Asian MBAs. In addition, the restoration of hiring at London’s large banks, coupled with the vibrancy of the consulting sector within the region as a whole, should lay the groundwork for next year’s forecast to become a reality. 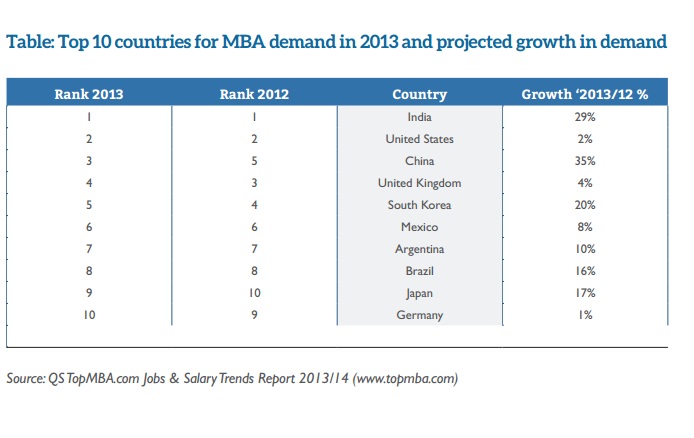 Eastern European jobs for MBAs set to take off in 2014

It looks like the wait for a significant increase in Eastern European jobs for MBAs may finally be over. After a five-year period where the region saw the slowest growth in MBA demand worldwide, it rose 6% in 2012/13.

However, it is in 2013/2014 that the region is set to take off in terms of MBA recruitment with a huge 34% growth predicted. Even considering the relatively small base from which these percentages stem, this represents highly promising news for MBAs considering Eastern European jobs after graduation.

Growth this year has been particularly strong in Bulgaria and Poland, with the two countries posting rises of 20% and 18% respectively. Indeed, the overall figure of 6% would look more favorable had it not been offset by the poor experience of Hungary this year, which saw a dramatic fall in MBA demand of 33% this year.

Next year’s predicted surge will most likely emanate from Russia’s energy boom as well as the expansion within its financial services sector.

Russian companies “are looking to hire more and more MBAs compared to recent years. An MBA is becoming a default attribute of a successful manager”, says Elizaveta Komolova, an HR consultant with Morgan Hunt in Moscow.

The oil economies of both Kazakhstan and Azerbaijan are also expected to contribute heavily towards growth in 2014 as their local young professionals are increasingly being encouraged to study for an MBA.

Report predicts hike in MBA jobs in America and Canada

As forecast last year, 2013 has seen a flat growth of 2% in North America. However, the region looks set to throw off the shackles of this year’s underwhelming rises, as employers across the region predict a rise of 16% in MBA jobs in the US and Canada in 2013/2014.

The key factor in this forecast is an increasing confidence in the US economy. The stabilization of its financial services, recovery of some manufacturing industries as well as new MBA employers again seeking bases there, all look set to bring about a sharp upturn in the number of MBA jobs in America and Canada on offer over the next year.

Technology the highlight among industry growth for 2013

In terms of industry growth, the technology sector – which has driven Asia’s expansion in recruitment – has grown like never before with an 11% rise in MBA jobs over the past year worldwide.

11% industry growth has also been enjoyed by the consulting, finance and general industry sectors (within which energy has had an especially good year, with a 14% rise in MBA demand).

At the opposite end of the scale, it appears the boom for the metals & mining sector has reached its conclusion after it saw a 1% drop in MBA demand this year. In addition, industry growth of just 2% with a forecast of 1% for 2013/2014 within pharmaceuticals and healthcare has been reported as companies have largely targeted a smaller pool of graduates at top-tier institutions.

On the whole, the findings of this year’s report must be taken as positive. Worldwide growth in demand for MBAs has again displayed the overriding health of the qualification, ably aided by the increases in the number of jobs in Asia, and in particular the number of jobs in India and China, that have become available to MBA graduates. In addition, forecasts for 2014 point to further growth, not least because of expected recoveries in North America as well as a burgeoning expansion of MBA opportunities within Eastern Europe.