Which industry sectors offer the highest MBA salary levels? Find out with data taken from the 2014/15 QS TopMBA.com Jobs & Salary Trends Report.
What are the latest trends in MBA jobs and salary levels?

Two of the most appealing aspects of an MBA – not the only ones of course, but certainly fairly high up the list for most – are the ability to change career and the expectation of a greatly-improved salary.

Every year, QS surveys actively hiring MBA employers from around the world to identify trends in MBA salary levels and jobs. These findings are broken down by region and by industry in the QS TopMBA.com Jobs & Salary Trends Report in order to help prospective MBA students understand what their post-MBA prospects look like. 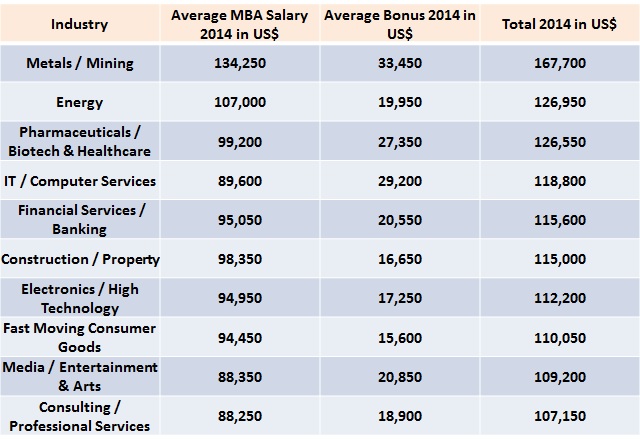 Metals/mining, as you can see leads by quite some distance, both in terms of the base MBA salary commanded and its average bonus. New opportunities in the sector grew by 10% in 2014, but it still only accounts for 2% of all the MBA jobs out there. This is unlikely to change in the near future with only 1% growth in new opportunities predicted for the coming year. Growth in MBA jobs in the sector is particularly notable in Latin America and the Middle East & Africa.

In second place, energy similarly accounts for a small percentage of overall opportunities, though it stands at a considerably bigger 4%. Like metals/mining, it has grown stridently this year (18%), though next year’s predicted figure of 5% represents something of a slowdown. Alternative energy, the replacement of the retiring upper echelons in big oil and renewables have driven this growth.

Third placed is pharmaceuticals, whichalso accounts for 4% of MBA jobs, after 9% growth this year. However, the respite from the stagnation which has affected this traditional big hitter in terms of MBA salary levels seems to be only temporary, with no growth predicted next year.

IT (accounting for 13% of MBA jobs in 2014) and financial services (22%), both of which have seen growth this year (8% and 7% respectively) offer considerably more opportunities than these smaller sectors, as does tenth placed consultancy (12%).

It’s worth bearing in mind that though consultancy only just squeezes into the top 10, this is largely due to a proliferation of smaller, boutique consultancy firms in recent years. The established leaders in the strategy consulting field still offer MBA salary levels (not counting bonuses) in the US$110-130,000 range.

If you want to know more about MBA salary levels, or MBA jobs, by industry or region, you can download the full report for free by following the link below.

What are the latest trends in MBA jobs and salary levels?

This article was originally published in May 2016 . It was last updated in February 2018