There’s no beating around the bush. Much as the MBA qualification is about more than furthering one’s career and earning a hike in pay as a result, few applicants and candidates can truly admit that MBA salary levels are not something which motivated them to undertake the degree.

The degree is an investment in a person’s professional career, after all, and securing an MBA job with its commensurate MBA salary is an important part of any student’s return on this investment.

Below are the 10 countries offering the highest average MBA salary levels, as reported in the newly-released 2014/15 QS TopMBA Jobs & Salary Trends Report.

Please note that these figures represent the average base MBA salary on offer in each country, and that this therefore does not include bonus entitlements (as seen in last year’s comparison), whether paid to secure an MBA graduate’s services or for end-of-year performance.

The figures should also be treated more as an approximate guide than a general rule, as they are unable to draw upon as many employer responses as can be found in the regional comparisons of MBA salary levels contained within the report’s pages. For this reason, year-on-year fluctuations are much more likely to occur than in an analysis of regional salaries. 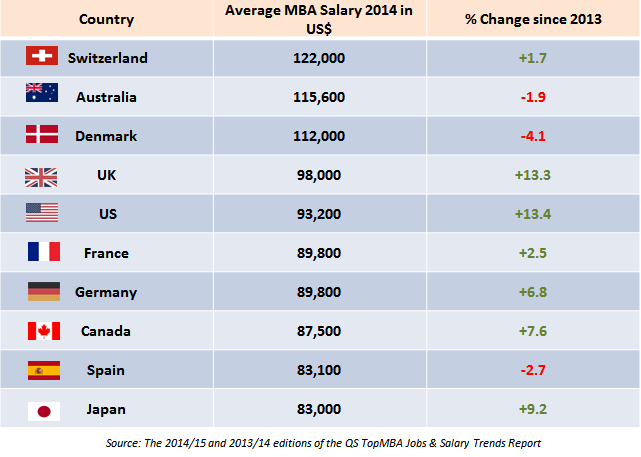 As can be seen in the table above, the biggest rise in base salaries this year came from MBA jobs reported in the US, which remains home to the world’s largest number of MBA employers. Consequently, it is also the country in which one can find the biggest range of salaries in MBA jobs.

Notable increases were also seen in Canada as well as the Western European nations of the UK, Germany and, to a lesser extent, France and Switzerland.

The gains witnessed in 2014 by these traditional markets for MBA jobs represent the realization of last year’s prediction that an economic recovery would bring with it a marked improvement, not just in available positions, but also in salary levels.

Switzerland’s position at the helm of this table can be partially explained by the number of its financial services companies as well as this year’s relocation of important hedge funds and multinational firms from London and Frankfurt as they seek to cut tax bills.

Although Australia and Denmark both reported slight decreases in average base MBA salary levels, the two countries comfortably remain in the top three with averages well in advance of US$100,000.

Australia, meanwhile, continues to lead the way for Asia Pacific – a region still reporting significant salary variation between countries. Although, the rise reported by Japan, another mature MBA jobs market, brings it into close proximity with Spain in 2014.

This last point provides a clear example of a long-term trend in MBA salaries that has been on-going for more than a decade – with an increasingly competitive global market for the brightest MBA talent, salary levels in the countries of differing regions are edging ever closer together.

This article was originally published in October 2014 . It was last updated in June 2018