Russian and CIS MBAs Look to the Near West | TopMBA.com

Russian and CIS MBAs Look to the Near West 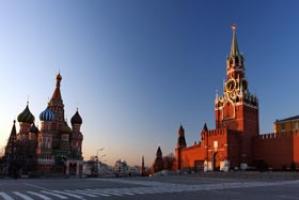 Russian and CIS MBAs Look to the Near West main image

Russian and CIS MBA candidates are looking west, but not as far west as in the past, a recent survey shows.

The TopMBA.com Applicant Survey 2010, an annual survey of thousands of international MBA candidates by QS, the world’s leading MBA career and education experts, shows that the US is now no longer the preferred study destination for Russian and Common Wealth of Independent States (CIS) MBA candidates.

Top spot has been taken by the UK, with most other leading MBA countries in Western Europe, Canada and Australia also increasing their popularity.

Kazakh Meruert Rakhimova chose the UK’s Manchester Business School, which has 84% international students, for classroom diversity: “At Manchester Business School we were a class of 130 students from 30 different countries. This defines the size of your network upon exit from MBA should you need to do business cross-nationally, and doing business is all about networking.”

Her perception is increasingly commonplace. Statistics show that European schools have, on average, a far higher international diversity of students and faculty than US schools. There is a perception, even among Americans such as Eric King who chose ESADE in Spain for the same reasons that European MBAs focus on more international rather than US-based studies: “I wanted to get a more international worldview than the typical US school could offer,” says King. “Coupled with a strong passion for new experience, [this] is what led me to consider my MBA abroad. I identified schools I felt would provide a similar academic challenge and degree equity as the top US schools.”

Polina Strandstrem, an alumna of Oxford Saïd Business School, agrees: “I was after truly global exposure and the MBA course in a European business school satisfied my needs better than studying in a purely American environment with its strong cultural emphasis. Being part of a highly diverse class with 46 nationalities and learning from professionals from all over the world… unlocked many opportunities and has already immensely broadened my network. Returning to the business world this is proving to be the most indispensable asset.”

Despite this, there is little debate here at TopMBA.com that American business schools continue to dominate the MBA world. However, though 60% of MBA candidates worldwide choose it as their preferred destination, this figure stood at 79% as recently as 2009. And, in 2010, 63% of Russians said they would consider studying in the UK while only 58% put down the US as an option.

So what does this mean? Has the US dominance, like the Roman Empire, come crashing to its knees while the latest kids on the block assert themselves?

Not likely, says Nunzio Quacquarelli, managing director of the QS World MBA Tour, the world’s leading series of MBA fairs. “There’s no doubt that business schools outside the US have taken this time to improve standards, market themselves heavily and to attract international students who are looking for an alternative option to the US. While the economic downturn remains, this is likely to stay the case, however when the upswing happens, or when the US introduces more visas for MBA alumni, this may very well return to pre-recession norms.”

Two years versus one

Taking an MBA program is a major financial investment and there are push and pull factors that influence this decision strongly. The American MBA model involves a two-year program. Business fundamentals are taught in year one, internships are encouraged in the summer and specialized modules are taken in year two. This allows the student more time for self-reflection, for personal consideration of where they would like to go with their careers with the bonus of the intern getting a foot in the door at leading companies.

And the downside? Two years out of the workplace could be a bad move during uncertain economic times, and that is ignoring the costs involved in not earning a salary for two years. Not only that but the decision of the previous US administration under George W Bush to slash the number of H1-B visas by 66% has made remaining in the US after graduating even harder than it was before.

Victoria Pralitch, Managing director of Russia’s top admissions consultants MBA Consult, says: “For me, the attractiveness of Russia has decreased recently and a lot of candidates think about studying in overseas business schools as a method of potential immigration.”

The Obama government has not made a change at this stage to rectify this, so that’s another cross in the US box. 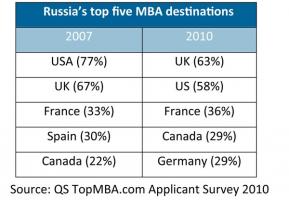 In Western Europe, MBA programs tend to be shorter, usually a year in duration. Though this allows less time for rumination, even American students in Europe are increasing in number, drawn to the ‘short, sharp shock’ of the one-year program and the increased level of diversity generally found in European business schools. For most Russians, the added bonus of being closer to home must surely have an impact too and the relative ease with which they can obtain visas, particularly in the UK, make this a compelling option.

Clearly, in 2010 it’s harder to take two years out of a safe career trajectory to do an MBA than it was in 2006-7. Taking one year out seems far the better option, and current employers are far more likely to look at this sympathetically, maybe even re-hiring MBAs after they graduate.

But is this the death knell for international applications to American business schools? It’s unlikely; after all, most rankings are dominated by American schools such as Wharton, Harvard, Stanford and NYU Stern.

Dmitry Kaliadin, one of the many thousands applying to Harvard Business School, considered the UK closely but set his sights on the US. “From the perspective of quality of education and living conditions during the program the US looks more accessible and easier. Part of the decision-making process depended on the location of the school, and New York and California both look more interesting to me. Also the program intensity compared with the one-year programs looks more logical to me.”

It looks like Russians will be looking even further west in years to come.

This article was originally published in November 2012 . It was last updated in June 2014