The Obama Effect and the MBA World | TopMBA.com

The Obama Effect and the MBA World 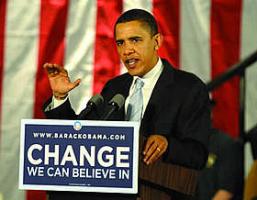 The Obama Effect and the MBA World main image

What is the extent of the impact of the US election on the MBA world? As Barack Obama takes his seat at the forefront of the USA, this may have more after-effects for the MBA world than we realise.

The election of Barack Obama as the forty-fourth president of the United States signaled a radical change in the nation’s history and politics and has drawn strong interest around the world. For MBAs this could have a profound effect too. What effect will Obama’s election have on the MBA programs in the US? What are the major hopes or concerns of the deans of top MBA schools, and what do they hope will change under the new administration?

From an obvious desire for change in US visa policies to hopes for a more internationally-aware presidency, the hopes and expectations of senior US business school administrators are wide-ranging.

Current immigration policies make it challenging for foreign students to obtain visas to enter the US to attend school, and even more challenging to remain in the US for employment.  Limits in the numbers of work visas have caused many US employers to shy away from hiring foreign nationals. For the past five years, the US government has capped the number of work visas at 65,000, with significantly more than that number requested. Forecast demand for the H-1B visas is forcing the US citizenship and immigration service to allocate visas via a lottery in 2009.

However, according to Phillip Phan, of the Johns Hopkins Carey Business School, “Immigration reform will likely focus on illegal rather than legal immigration. The number of employment visas is unlikely to increase under Obama. In the extreme case, they may even decrease as a response to job protection sentiments.”

Jim Olver, assistant dean at William & Mary’s Mason School of Business, sees things somewhat differently. “Based on his voting record and platforms, I think President-elect Obama understands that yielding to protectionist urges damages the long-term competitiveness of the United States. I would expect him to favour expanding visa opportunities for highly skilled internationals.”

Dean Thomas Moore, Northeastern University School of Business believes that Obama’s stance will benefit American MBA programs by strong leadership in sustainability and environmental issues. “US business programs need to educate students to develop sustainable business models that don’t drain financial and environmental resources.  Europe has been ahead of the US in this area for some time, and MBA programs in the US need to respond to this ever increasing need.”

President-elect Obama has said that he would like to spend $150 billion over the next 10 years developing alternative energy.  "Now is the time to declare our energy independence once and for all," he said in October 2008. Universities with specializations that align with the president-elect’s priorities hope that this synergy will enable them to move their initiatives ahead further and faster. According to Debbie Berechman, executive director, MBA program, Sloan School of Management at the Massachusetts Institute of Technology, “Obama’s commitment to lessen the US dependence on fossil fuel and MIT’s alternative energy initiatives are a good example of a potential partnership forged from a common vision.”

The economy trumps all

Most onlookers agree that the economic downturn is going to be Obama’s biggest challenge in the short term, despite his attitude to visas or internationalization. Jim Olver says: “The crisis seems sure to dominate [Obama’s] agenda, and it will likely increase competition for US MBA admissions slots as a large and growing pool of skilled but displaced managers take the opportunity to re-tool while waiting for a better economy.  If that assessment is correct, the next couple of years could present challenges for internationals looking for a US MBA and subsequent US-based employment.”

In the four weeks since the presidential election, the US unemployment rate has risen to 6.5 percent, with estimates that it will rise to 9 percent by the end of 2009. The shrinking job market, the squelching of credit by banks and a plunge in consumer spending conspire to create a challenging climate for business schools. At the Kellogg School of Management at Northwestern University, “the corporate recruitment is happening, but it’s much more conservative than it has been,” said Roxanne Hori, the director of career management. And while she has not yet seen companies rescind offers, she anticipates that some will. At the Sloan School of Management, “a few companies are delaying or cancelling visits, and some that had planned to hire second-year students now say they have filled their slots with summer interns,” according to Jacqueline Wilbur, director of the career development office.

To help finance his education priorities, President-elect Obama supports cutting banks out of the student-loan system, thereby eliminating billions of dollars in government subsidies to private lenders. “Its really important that we revamp our college loan programs to free up more money for students.  If we consolidate programs under the direct-loan program, we would save $4.5 billion,” he says. At Northeastern University, Dean Moore reports that an unpredictable number of students will be forced to leave school because they cannot secure student loans.  According to Dean Phan of Johns Hopkins, “if job prospects continue to be poor, enrolments will drop as people consider the costs. As large corporations cut back on expenses, things like tuition reimbursement will get put on the table.”

All of the top university administrators hope that the Obama administration will include an economic-stimulus bill that will include money for research, campus infrastructure and student aid. Dean Paul Danos of the Tuck School of Business at Dartmouth sees the need for global monetary authorities “to come together to create a safe, predictable and steady regulatory system in order to build back confidence in the world’s financial institutions.”

On election night, Obama acknowledged he faces a daunting set of problems: “two wars, a planet in peril, and the worst financial crisis in a century.” In Washington, 20th January 2009 will be an extraordinary Inauguration Day, and will mark the start of Obama’s efforts to meet these unprecedented challenges.  The expectations of the MBA community are great, and stakes for the world couldn’t be higher.