Top Employers in the US Named by Business Students: MBA News | TopMBA.com

Top Employers in the US Named by Business Students: MBA News

Which top employers in the US do business students dream of joining?
View MBA salary trends by region and industry in a free report

A new survey of more than 80,000 business students across 366 universities in the US has revealed the nation’s top employers by individual preference.

The survey, carried out annually by Universum, asked business students at undergraduate level – of which about 25,000 were business majors – to select their five top employers from a designated list of 230 renowned companies operating in the US.

In the top 10, Google, Walt Disney and Apple maintained their positions as the three most desirable places to work among US business students, in first, second and third place respectively. Google’s attractiveness may not lie in its recent success alone, but also in its perceived forward thinking stance – a spokesperson for the Google-owned YouTube, for instance, recently made headlines by sending a reporter an animated GIF of a perplexed child in lieu of an official comment.

Elsewhere in the top 10, Nike shot up four places to fourth, Goldman Sachs climbed from ninth to seventh and the FBI crept into 10th, from 15th position last time round. In accommodating the Feds – the top 10’s only new entry – KPMG fell from 10th to 18th, the biggest downward fall in the top 20.

The rise in the attraction of fashion retail was a point of interest cited by Forbes. Nordstrom and H&M both feature in 2015’s top 20, climbing three and twelve places respectively. Indeed, H&M’s rise from 31st to 19th represented the top 20’s biggest upward move, ahead of Starbucks, which climbed from 25th to 17th position. Forbes also noted that a greater number of companies on Universum’s list of top employers were under business students’ consideration compared to three years past – a tentative sign that the US economy’s revival has enabled a greater level of exposure and appeal, in terms of potential opportunities, for more of the country’s top employers among those attending university in the US.

In comparison – top employers among MBAs

How do employer preferences differ between the undergraduate and those of the MBA? The table below collates the 20 top employers in the new undergraduate survey along with findings taken from Universum’s 2014 survey of approximately 2,500 US MBA students. The percentage proportions shown represent the proportion of respondents who placed a company among their five top employers: 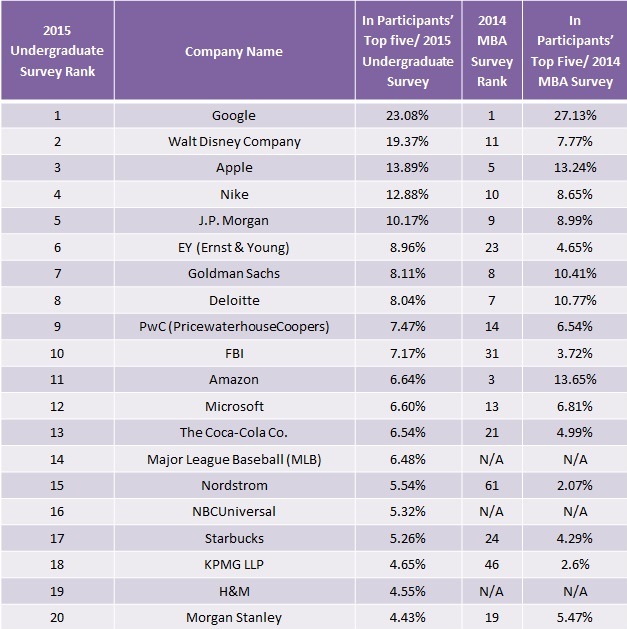 As one might expect from an MBA’s greater level of experience, the chief difference here is the absence from the undergraduate survey of consultancy firms, McKinsey, Bain and BCG – all of whom are established MBA employers that feature within the top 10 preferred companies in the MBA survey.

More interesting perhaps, is that new technology firms – Amazon in particular - enjoyed greater resonance among an MBA audience than an undergraduate one. Amazon was as high as third in last year’s MBA table, but is just outside the top 10 among undergraduates. Meanwhile, in the new undergraduate survey, Facebook is eight places adrift of its position in 15th in the MBA survey (and therefore not shown in the table above).

In a separate survey, Universum polled around 2,000 company executives to get their take on the mechanics behind how they are perceived by the outside world and to see how employer branding might evolve between now and 2020. An infographic outlining its principal findings is reproduced below.

Interestingly, among companies’ pick of branding objectives, improving employee retention scored far lower than meeting long-term recruitment needs - in spite of the clear overlap. Taking an employer brand onto a global stage was the most popular objective.

When it came to measuring a company’s performance with respect to branding, Universum flagged up the fact that the top three KPIs (key performance indicators) among responding companies were all inward rather outward-looking: retention rates, assessing the quality of new hires and employee engagement making up the top three.

This article was originally published in April 2015 .