A Picasso may have just smashed the record for a sale at auction, but could a flood of his work seriously disrupt the art market?

Is a Picasso flood about to disrupt the art market?

A painting by Pablo Picasso has just set a new world record for its price at auction - Women of Algiers (Version O) exceeded expectations in fetching US$179 million at Christie’s in New York.

However, just last week, Harvard Business School (HBS) professor, Mukti Khaire drew on her own research into market and value construction in the creative industries to reflect on the potential disruption that the works of Picasso could yet cause the art market in the months ahead.

Having inherited roughly 10,000 Picasso pieces from her grandfather’s estate, Marina Picasso announced in February that she planned to sell the majority – many of which are lesser-known or early works – in one fell swoop, bypassing auction houses and art dealers in the process.

Without official intermediaries, values accrued in Marina Picasso’s sale are likely to be much harder to predict and driven more on individuals’ emotion. However, it is also the scale of her endeavor that is worrying those in the art market:

“One of the things people try to do in the art market is never to flood it at the same time with a single artist's work,” says Khaire in an article for Harvard Business School’s Working Knowledge. The HBS professor then explains that while well-known Picasso works, such as the Women of Algiers piece – part of series inspired by Eugène Delacroix – it is lesser-known works that could be hit by fluctuating values brought on by the pressures of supply and demand. “If I own a notable Picasso work, I can be reasonably sure it won't lose value. But if I am the owner of a lesser-known Picasso, I might be worried in this case,” Khaire reasons.

In this sense, the art market doesn’t quite align to the usual principles associated with the business world:

"From a business school point of view, there's a contradiction where the art market seems illogical or strange because it turns on its head some of the rules of competition. In many cases, investors are happy when supply goes up because price goes down and they can purchase more. But in the case of Picasso, and a few others, there's a slight subversion of that principle,” the HBS professor surmises.

Incidentally, ARTnews reported that a lesser-known Picasso, Petit carré au visage, has already sold – via Christie’s last year – for as little as US$1,558.

Australians have poor financial literacy, according to the University of Sydney Business School’s Susan Thorp.

Thorp, a recent appointee to a research committee at the OECD (Organization of Economic Cooperation and Development), says that more than half of Australians cannot answer basic questions on the subjects of inflation, interest rates and the diversification of risky assets.

“People are dealing with increasingly complex decisions sometimes involving very large sums of money without understanding the basics, such as compound interest. By any objective measure, many lack vital financial skills,” Thorp says in a press release for the University of Sydney Business School.

In her position with the OECD, Thorp is working to ensure that financial literacy programs – such as that provided in Australia by ASIC (Australian Securities & Investments Commission) – are as effective as possible. It is the OECD’s belief that the Global Financial Crisis exposed society’s failings with regards to financial literacy – not just in Australia but across its membership network. The organization has been looking at ways to contribute towards policy development among its member states as a result.

In Thorp’s mind financial literacy begins at school, where children must attain confidence in their numeracy skills. However, the University of Sydney Business School professor also feels that adults should be given adequate support by financial institutions and financial regulators when faced with big monetary decisions. 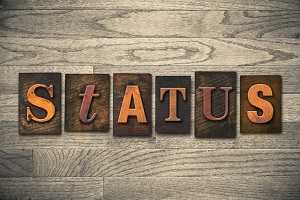 “I usually study the sexy angle of power and confidence but with this one, it’s about everyone. Everyone cares about status whether they’re aware of it or not,” says lead author and management professor at Berkeley-Haas, Cameron Anderson, in a press release.

This conclusion is reached in ‘Is the Desire for Status a Fundamental Human Motive?’ - a literature review of hundreds of existing studies carried out by Anderson and two PhD candidates at Berkeley-Haas, in which the team set out to assess criteria that can signal whether status is a fundamental human desire.

So, what is it that defines ‘status’ in the eyes of the Berkeley-Haas researchers? It is a combination of respect (or admiration), voluntary deference by others and social value (or prestige) and something that stands as distinct from the trappings of power and financial success.

The criteria they looked for in proving humankind’s ubiquitous hunger for status, meanwhile, included its positive effects on long-term psychological and physical health, with the reverse of this – low status contributing to ill health - being a particularly strong test of the hypothesis.

Understanding the pursuit of status is important, according to Anderson, because it influences how people think and behave:

“The desire for status can drive all kinds of actions, ranging from aggression and violence, to altruism and generosity, to conservation behavior that benefits the environment. The more we understand this basic driver, the more we can harness it to guide people’s decisions and actions to more productive paths,” he explains.

This article was originally published in May 2015 . It was last updated in December 2019

Get all the latest MBA news