The most competitive countries in world, when it comes to talent development and retention, all have plenty in common, being small high-income economies that have behaved similarly in their outlook.

Switzerland, Singapore and Luxembourg make up the top three positions in INSEAD’s new Global Talent Competitiveness Index (GTCI), which measures and ranks nations for competitiveness, based on its talent development, attraction and retention qualities.

“Faced with specific geographical challenges and a quasi-absence of natural resources, these countries have had no choice but to be open economies, a critical ingredient to being talent competitive,” INSEAD’s Bruno Lanvin, a co-author of the report, said of the top three in a press release.  This ‘openness’ in an economy encompasses trade, investment, immigration and new ideas. 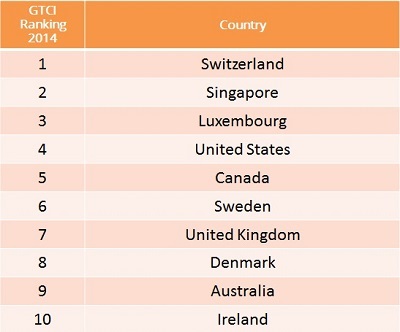 At the highest level of talent development and retention that constitutes the index’s top 20, there is a strong correlation to a country’s wealth – for the simple reason that this helps attract talent for reasons of salary and quality of life. It is also where you are most likely to come across the world’s best universities and business schools.

However, according to the competitiveness index, other factors are also detectable. For example, the fact that half of the nations in the top 10 are those with strong traditions of immigration: the US (4), Canada (5), Sweden (6), the UK (7), and Australia (9).

INSEAD’s GTCI, produced in collaboration with the Human Capital Leadership Institute of Singapore (HCLI) and Adecco Group, focused on the need for greater talent development in its second edition under the subtitle: ‘Growing Talent for Today and Tomorrow’.

In light of rising unemployment levels in many parts of the world and the changing needs of a globalized workplace, it emphasizes how ‘employable skills’ and vocational training must be placed at the front of business and governments’ minds – if economies are to grow at their full potential.

“There is an all-too-frequent mismatch between education systems and the needs of labor markets,” says INSEAD’s dean, Ilian Mihov.

In one section of the competitiveness index, the mismatch between current talent development and the needs of a country is particularly apparent:

“Despite 33 million people looking for a job in the US and Europe, more than 8 million positions are left vacant,” says Adecco Group’s CEO, Patrick De Maeseneire, who also writes that China may face a skills gap of more than 20 million college-educated workers by 2020 and that, by 2030, Indonesia’s need for skilled workers could rise from 55 million to 113 million.

With regards to Asia, Kwan Chee Wei, CEO of the Human Capital Leadership Institute (HCLI), attributes some of the area’s shortcomings in successful talent development to an adherence to traditional cultural practices in business:

“Traditional hierarchies and bureaucracy in many Asian corporates often hold back openness, transparency and empowerment – important levers in accelerating talent growth,” he says.

Switzerland’s position at the head of the GTCI is supported by the country’s educational provisions in vocational training, as INSEAD’s Paul Evans explains:

“At age 15, over 70% of Swiss school children go on to select what’s known as the apprenticeship track, combining practical work experience with traditional theoretical learning.”

Interestingly, this approach very much reflects that seen much further down the educational trail, with an MBA program’s emphasis on experiential learning – something that is intended to make graduates employer-ready when they depart business school.

INSEAD’s competitiveness index is suggesting that this should be much more engrained in a country’s national education systems and outlook. It also points out that what it deems ‘employable skills’ are changing along with technological advancements.

“For future talent competitiveness, countries have to take vocational education – that is, employability – much more seriously,” adds Evans.

The GTCI is holding a launch event in Davos, Switzerland today, January 20 with a further event for the Asia-Pacific region to be held at INSEAD Singapore on January 28.

MBA salary trends by region and industry in a free report

This article was originally published in January 2015 .