The “Oscars” of innovation in higher education were last night awarded to teams from universities in Taiwan and the US with radically new ideas for interactive platforms that will bring education into the 21st century.

The winners of the Wharton-QS Stars Awards 2014: Reimagine Education were announced at a gala on the campus of the Wharton School at the University of Pennsylvania in Philadelphia. The innovation in higher education awards were developed by QS Quacquarelli Symonds, the parent company of TopMBA.com and publisher of the QS World University Rankings, in partnership with Wharton’s SEI Center for Advanced Studies in Management.

The two overall winners will share a prize fund of US$50,000, offered by the International English Language Testing System (IELTS). 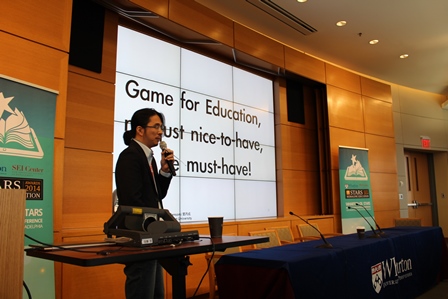 The first overall winner was PaGamO, from National Taiwan University. PaGamO is a multi-student social game in which students compete to amass virtual land and wealth by answering questions correctly.  The platform has been used for teaching probability in Chinese, math to K12 students in the US, dentistry to undergraduates at a US Ivy League school, and management and leadership to executives at a Fortune 500 company.

The second overall winner, PhET Interactive Simulations at the University of Colorado at Boulder, uses interactive animations to teach students fundamental scientific principles. Over 130 simulations have been used by more than 45 million students around the world.

Kathy Perkins, the director of PhET, said she hoped the simulations will make science and math more interesting to students in the hope that they would pursue studies and possibly careers in those fields:

“One of our main goals is to make science and math more accessible to more students,” she said after winning her award. “The idea is to help them discover the ideas themselves by engaging in simulations, so they own those ideas themselves.”

Ping-Cheng (Benson) Yeh, of the PaGamO team, had similar hopes:

“A lot of people think gaming education is ‘nice to have,’ but I think in the future gaming education will be a must-have,’ he said. “We tried to use games to get students back to learning, and PaGamO did achieve this. A lot of students became addicted to problem solving.”

National Taiwan University’s Yeh outlines how PaGamO works in the video below:

To take the top prize, PaGamO and PhET had to beat submissions from 427 universities and enterprises from 43 countries. In all the panel of 25 international experts who judged the global competition declared winners in 21 categories including e-learning, hybrid learning, nurturing employability, professional and MBA education, engineering, natural sciences, life sciences, arts and humanities, and six global regional awards.

The US captured the top spot in nine categories, dominating the competition, but winners came from 11 countries in all, including India, China, Mexico, Saudi Arabia and Australia. The complete list of winners, runners up, and third-place finishers in these inaugural awards for innovation in higher education can be found at the Reimagine Education website.

QS founder Nunzio Quacquarelli, a driving force behind the competition, said the awards represent a natural growth of the QS business, which is focused on supporting the needs of internationally mobile students around the world. The goal, he said, is to recognize innovation in higher education and, in particular, to identify innovative technologies and methods that improve learning outcomes and employability.

“Reimagine Education is our solution to shine a light on excellence in innovation in teaching and learning—a global award scheme judged by some of the world’s leading educational experts,” Quacquarelli said. “The mission of the conference is of global significance and impact: to identify the most innovative learning solutions emerging around the world.”

In addition to PaGamO and PhET, the 2014 winners include: 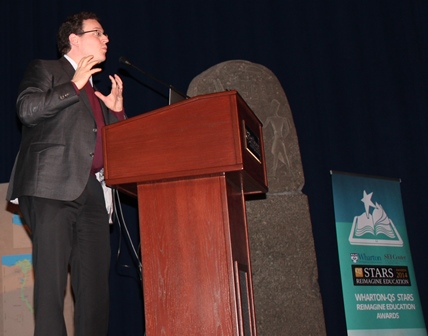 In his keynote address last night, Ben Nelson, the CEO of the San Francisco-based Minerva Project, an ambitious effort to deliver high-quality liberal arts education online, described the Minerva Project’s method, which differs fundamentally from how most traditional educational programs work. Instead of delivering content—literature, chemistry, biology—Minerva’s curriculum is built around 129 fundamental concepts and “habits of mind” to develop graduates who are capable of critical thinking and analysis.

The Minerva Project’s four-year program, which targets global high-achievers, is both residential and online—students live together but take classes online. It takes cohorts of 150 students to six cities around the world.  Nelson said students typically devote 40 to 50 hours a week to schoolwork in the first year. Advanced classes typically have no more than 19 students. In all 80% of the Minerva Project’s students are from outside the US, and are more economically diverse than traditional elite universities.

The goal, in all of this, Nelson said, is to produce graduates capable of making “decisions of consequence that the rest of us can live with.”

Jerry Wind, director of the Wharton SEI Center for Advanced Studies in Management, described the Minerva Project as “the most exciting educational innovation” in the world today, and one that has much to teach traditional universities:

“The current approach is obsolete,” he said. “We have to have the courage to experiment with new approaches. We need courageous leadership.”

The Reimagine Education conference, which began on Monday, wraps up today with more awards announcements, presentations by shortlisted entrants, a keynote address on the neuroscience of learning, and closing remarks by Quacquarelli and Wind.

Highlights of the three-day event included an address by Daphne Koller, co-founder and president of the online learning platform Coursera, a panel on employability featuring top executives from Cisco and IBM, and a presentation on emerging educational technologies chaired by Barbara “Bobbi” Kurshan, executive director of academic innovation at the University of Pennsylvania Graduate School of Education.

This article was originally published in December 2014 . It was last updated in August 2016

The Future of Education: What Will Be the Impact of Online Learning?