What do the reptilian qualities of lizards have to do with corporate reputation? Well, both possess traits that can ultimately ensure their survival, according to Dartmouth Tuck professor, Paul Argenti.

Argenti, who was searching for a more forward-looking measurement of corporate reputation, believes he has found one among his colleagues in Dartmouth’s biological sciences department. 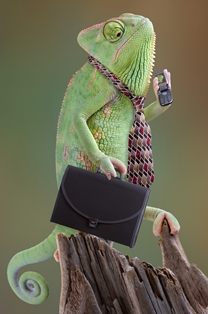 The corporate communication professor is now working with an evolutionary biologist (specializing in frogs and lizards) and an expert in genomics in an attempt to apply their method of tracking physical traits in animals to traits that affect reputation, such as customer satisfaction and employee engagement.

The Corporate Adaptive Landscape takes its cue from the Adaptive Landscape used by two members of the biological sciences faculty at Dartmouth, Ryan Calsbeek and his wife, Brittny, to measure the development of an animal’s physical traits through the process of natural selection and to subsequently determine how their current strengths and weaknesses might indicate how they will evolve in the future.

The ongoing process of adapting the model for use in the business and branding world is allowing the team to identify which company traits have the most significant effect on reputation through time, which traits take on more significance in different countries and even the right level of investment to make in certain areas to achieve ‘fitness’ against competitors.

“We’re really just starting to get under the hood and it’s a richer view of reputation. Within a given data set we will be able to establish criteria that influence reputation in meaningful ways,” said Ryan Calsbeek.

“The goal for us is to keep trying to push the frontiers on the research,” Argenti said. The Dartmouth Tuck professor believes that existing measurements of corporate reputation, such as the Fortune Most Admired list, are flawed in that they generally assess what happened at a firm in the previous year and therefore cannot provide guidance on how reputation might be influenced in the future.

“It’s one of the great research questions people have been asking for years, and it will have huge implications for how companies manage their brands and develop a strong reputation,” Argenti added, expressing his hopes for a model, inspired by nature, that is both evolutionary and revolutionary.

Following the latest innovations can be just as profitable as pioneering them, according to new research from Duke University's Fuqua School of Business (Duke Fuqua) and Frankfurt School of Finance and Management.

John Joseph and Ronald Klingebiel, strategy professors at Duke Fuqua and the Frankfurt School respectively, looked at the launch of new innovations in mobile phones between 2004 and 2008, a period that preceded the smartphone era in which no one company dominated the market, yet one that was teeming with the release of new innovations.

What they found was that firms who were first to incorporate new features tended to bring out a number of innovations at the same time – some of which caught on and were profitable and some of which were not. However, these innovators didn’t necessarily perform any better financially than those who waited to see which features proved popular before introducing them to their own products, as long as they chose carefully:

The market under analysis was Germany and a total of 69 new technologies —from cameras and Wi-Fi to music players – across the release of 393 phones by 46 different companies were scrutinized. The financial returns on a new feature were then compared to the order in which companies had released this feature.

Innovation hits were defined as those that brought in an average of €2 million (c. US$2.2m) a month more than a similar phone without the new feature. HTC’s release of the first music player did well in 2004, for instance. Nokia’s twisting clamshell design did not. The researchers also found that the potential to make extra revenue from a new feature tended to peak six to twelve months after a launch.

"The big money is going to be made at the very beginning. The problem, of course, is that the company that introduces broadly, they do well on the hits but get stung by the flops. The later guys don't get the big bump, but they get a little bump and they avoid the flops,” the Duke Fuqua professor explained.

Power of indoctrination on youth found in Third Reich research

That government policy and propaganda can significantly modify public opinion and attitudes might not be a surprise to all. However, new research into Germany’s Third Reich period (1933 to 1945) shows that it was most likely schooling and extracurricular activities such as the Hitler Youth, rather than broadcast and print media, which was the most significant means of propagating the Third Reich’s ideological agenda.

In a new paper coauthored by Nico Voigtländer, and Hans-Joachim Voth, economics professors at UCLA Anderson and the University of Zurich, respectively, traces of antisemitic feeling were found to be much more pronounced among those who had spent their formative years under the Third Reich in two surveys carried out 10 years apart, in 1996 and 2006, in Germany. Although these traces were still only found in fractions of the population, the results also show how the results of indoctrination can linger in spite of the passage of time.

“Few governments in history were more ambitious in their attempt to indoctrinate the population than the Nazi regime in Germany, and it particularly focused on the young. Our findings demonstrate that beliefs of Germans in their first decades of life were strongly malleable,” concludes the paper, published in Proceedings of the National Academy of Sciences of the United States of America (PNAS).

In addition, the researchers noted that the Third Reich’s indoctrinating tactics were substantially more effective in areas where antisemitism was already in evidence - something that the paper argues resonates with broader social interaction studies that show how an idea can become more attractive if it is compatible with existing beliefs and “suggests that confirmation bias [selecting information that confirms one’s beliefs] may play an important role in intensifying attitudes toward minorities.”

This article was originally published in June 2015 . It was last updated in September 2019