From Liberal Arts Degree to MBA jobs in IT | TopMBA.com

From Liberal Arts Degree to MBA jobs in IT

Does an MBA in IT look impossible with a liberal arts degree? Find out how Jeremey Schiefling, owner of Break into Tech, landed a marketing internship with Apple.

I’ve always considered myself to be a huge computer science nerd. While all my childhood friends were outside playing football, I was busy installing DOS on my first computer. And when I should have been writing book reports, I was, instead, blogging on Prodigy - before blogging was even a thing!

But I never thought I’d get a chance to actually pursue a job in my computer science passions. Not with the scarlet letter that I wore ever since college…a liberal arts degree. No CS major, no options for tech jobs, I always assumed.

So instead, I started my career as a kindergarten  teacher. And though I’d try to find outlets for my geekdom – building a class website, teaching my students PowerPoint – I figured that was as close to any tech jobs as I was ever going to get.

As the years passed though, I could never fully get the idea of the many possibilities of tech jobs out of my head. Each incredible innovation – PDAs, MP3 players, smartphones – was like a fresh taunt from the other side: "Hey, how cool would it be to work on me?" And like Poe's telltale heart, the idea began to beat louder and louder in my thoughts until I finally broke down and asked a friend in the tech sector for advice.

One friend, a computer scientist by training, took pity on a poor, pathetic liberal arts major and offered this nugget: "I don't know much about the non-technical side of things but an awful lot of folks over there seem to have an MBA in IT..."

That seed, planted innocuously in my mind, quickly began to germinate. Before I knew it, I was on the road to my own MBA in IT: signing-up for the GMAT, researching top business schools, and trying to figure out what ‘net present value’ and ‘supply chains’ were all about. In the end, I was lucky enough to snag a spot at the University of Michigan's Ross School of Business, chosen because it seemed like a collaborative, down-to-earth place where an ex-kindergarten teacher might just be able to fit into an MBA in IT program.

An MBA in IT at Michigan Ross

Thus, two decades after my first computer experience, it was with great trepidation that I entered a top business school like Michigan Ross. Especially because on the first day, I met no fewer than seven former engineers who not only wanted the same marketing internship I did, but who were actually qualified to get it.

And here’s the crazier thing about that marketing internship: I wasn’t alone. On that same bus headed to Cupertino was a former snowboard designer, a former Navy submariner, and a former manager at China's largest egg processing facility; not a single computer science degree between the four of us.

How was this possible? How did we all make the transition into a world that can feel so forbidding to non-techies?

The secret is in the data. Because if you crunch the numbers for MBA jobs on LinkedIn – and I have – it turns out that for all of Silicon Valley’s apparent geekiness, 3/4 of its jobs are non-technical in nature: 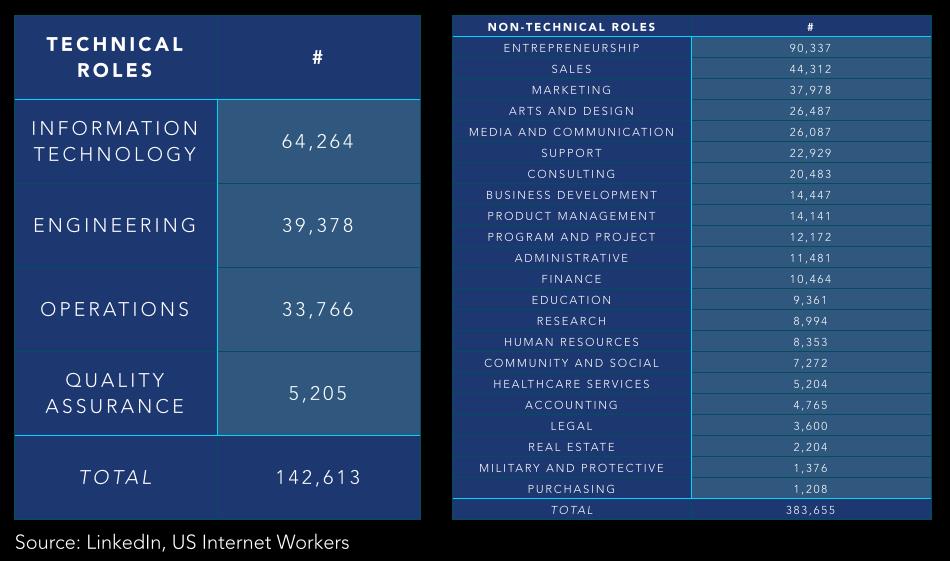 Which just makes sense if you think about it. Sure, it takes a lot of coders to make an awesome app. But it takes even more HR people to hire those coders, project managers to keep them organized, and marketers to bring their work out to the world.

And the result is that there are tens of thousands of liberal arts folks with MBA jobs  in tech - just like me: 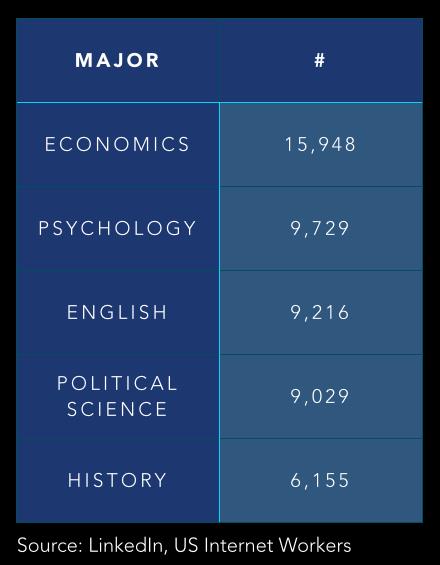 So if you’re also a nerd – or like me, a nerd in hiding – know this: The tech world is wide open for business. Don’t be afraid to knock on its door.

This article was originally published in November 2015 . It was last updated in June 2020