The 15th edition of the Corporate Recruiters Survey, carried out annually by GMAC (the Graduate Management Admissions Council and body responsible for administering the GMAT admissions test), reveals a positive outlook for the MBA graduate job market in 2016 – the best since 2010, in fact.

In the survey of 800 corporate recruiters who work directly with participating business schools, 88% say they plan on hiring recent MBA graduates in 2016, compared to the 80% proportion that actually hired MBAs last year. Nearly nine out of 10 companies (88%) surveyed plan to conduct on-campus MBA recruitment in 2016, up three percentage points from 2015. In addition, 54% of employers are using social media as part of their recruitment strategy of master’s-level business graduates. These factors combined indicate the importance of MBAs having both a strong in-person and online presence during their job search.

Companies plan for growth and expansion, corporate recruiters look most to MBAs to fill roles

A majority of employers globally say they will focus on expansion over the next year, with growth projected to be highest among companies in Asia-Pacific and the US, who report an expected 66 and 53% increase in staffing, respectively. Employers in Latin America and Europe, on the other hand, are not showing quite as much demand for new hires in 2016. Indeed, 54% of those in Latin America and 50% of those in Europe are looking to either maintain or decrease current staff numbers.

In terms of job functions, employers surveyed indicate relatively high demand for both ‘business development’ roles – 64% of firms in the consulting industry say they are seeking to fill these roles, as do 88% of those in each of tech and healthcare. ‘Sales and marketing’ roles are also popular, with hires in this area sought by 87% of firms in tech, 92% of those in products and services, and 85% of those in healthcare.

In general, the healthcare and pharmaceuticals industry may prove to be the most fertile job market for recent graduates. Every single one of the industry’s respondents (10% of GMAC’s total sample), say they plan to hire MBAs in 2016, followed by 92% of those in the consulting and manufacturing sectors, and 88% of those in the energy and utilities industry).

However, healthcare and pharmaceutical firms also seem to be the least willing to hire international students on the basis of GMAC’s results – only 11% of those polled gave a resounding ‘yes’ to this effect, compared to far higher proportions of equivalent responses from industries such as consulting (33%), technology (27%) and finance (26%). 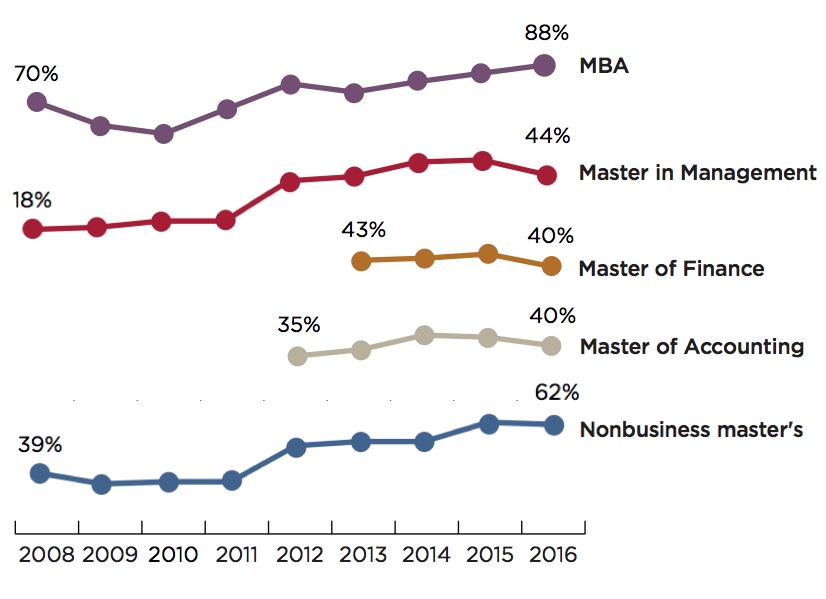 Of all master’s programs tracked by GMAC over the last five years, it is the MBA that has shown to be in the most steady demand pool for new hires. While previous surveys showed an increase in the hiring of candidates from 2013 to 2015 across all master’s programs (non-MBA as well as nonbusiness programs tracked by GMAC), the MBA is the only master's level degree program to have continued to increase in demand through to last year. This perhaps more generally indicates a high degree of trust that employers have in MBA programs to prepare students for a wide range of roles, and indeed, for companies that are in modes of growth and expansion.

In addition, the majority of firms (66 to 84% of companies, depending on industry) plan to offer MBA internships in 2016. Given that internships have proven to be a clear path to full-time employment after graduation (57% of companies hired more than half their MBA interns in 2015), it appears that MBA programs offer far more likelihood for not only internship options but also post-graduation employment than do non-MBA business master’s programs. Of the 20 to 34% proportion of surveyed companies (depending on industry) who did offer internships to non-MBA business master’s students, only 37% hired more than half their interns last year.

GMAC also asked employers about their recruiting activities from specific business-related non-MBA programs: From this, we can glean that about a quarter or more of all corporate recruiters are actively seeking graduates from master’s programs in supply chain management (27% of respondents), marketing (24%) and data analytics (26%). Within the technology industry, 43% plan to hire graduates of data analytics programs, nearly twice the share of companies in other industries whose recruitment plans involve these candidates. While the survey did not look at MBA programs with specializations specifically, this may indicate the value of more focused study in these industries.

Just over a fifth of employers (21%) expect to increase starting salaries for MBA hires, with a further third (33%) of total respondents indicating that they plan on at least increasing starting MBA salaries by the rate of inflation. Based on data supplied by US corporate recruiters (the singular region to supply enough data in this area for GMAC to report on), the median starting base salary for recent MBA graduates is expected to be US$105,000, up 5% from what was expected last year.

Based on the survey, MBA graduates can expect higher salaries from US employers than graduates of all other master’s-level business programs. This is congruent with figures reported last year in QS’s jobs and salary trends report, which placed the US and Canada as the top-paying region for MBA graduates (at an average base compensation of US$97,300).

While GMAC’s survey does not report on non-US based employers, it did report on opportunities for international job placement: Overall, 52% of corporate recruiters report that their companies either have plans to hire (24%) or are willing to consider hiring (28%) recent business school graduates who require additional legal documentation, such as work permits or H-1B visas.

As destinations of work impact expected salary, prospective students considering location when applying to schools may want to take note of the international hiring trends reported by GMAC: Globally, the majority of companies plan to place new graduate business hires within the region in which they recruit candidates. This is most notable among US companies (98% placed in US) and Latin America (92% placed in the region). Recruiters in Europe and Asia-Pacific tend to split their hiring across more diverse regions, making it more likely that international students studying in those regions may wind up working in regions outside their study destinations.

Globally, firms in Asia-Pacific display the highest rise in demand for MBAs, with 62% of companies reporting their intention to hire more MBAs than previously (compared to 46% for firms in Europe and 47% for those in Latin America); US companies, meanwhile, show the most diverse likelihood in hiring candidates from a mix of master’s-levels business programs, with the highest interest shown towards graduates from master’s in accounting programs (49% of respondents) followed by MBA (44%), and finance (38%).

This article was originally published in June 2016 . It was last updated in October 2016

The Benefits of Language Skills for an International MBA Career

What Career Can I Have With an MBA?