Where are the MBA Jobs? The World’s 20 Biggest Markets | TopMBA.com

Where are the MBA Jobs? The World’s 20 Biggest Markets

Which countries are at the head of the pack for the number of MBA job opportunities they have to offer?
The QS TopMBA.com Jobs & Salary Trends Report 2015/16 is out now!

Where are today’s biggest markets for MBA jobs? This is one of the central questions around which the newly-released QS TopMBA Jobs & Salary Trends Report 2015/16 is based.

The report’s findings, which stem from a survey of approximately 4,000 actively-hiring employers of MBA graduates, offer valuable insight in this respect, assessing both short and long-term regional trends in MBA jobs. We must qualify this by saying that the report is not exhaustive, so growth figures must be taken as representative rather than exact.

Assessing country-by-country prospects for holders of the MBA degree

If you want to assess the prospects offered by an individual country’s market, however, it’s important to consider the size from which it is growing. As much as a fast-growing market is a promising sign of things to come, it is a lot easier to grow quickly from a small number of existing opportunities than it is to build upon an established, and sizeable, platform. 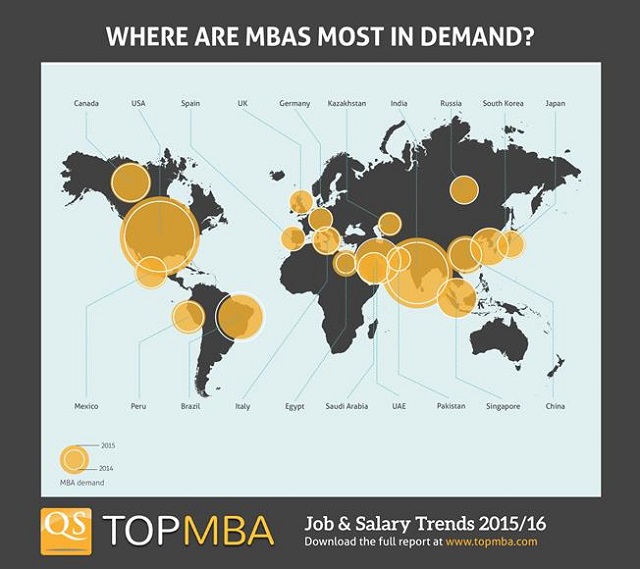 With this in mind, let’s consider the fortunes, in terms of growth in MBA jobs, of the world’s 20 biggest markets by the volume of opportunities reported to us.

The spiritual home of the MBA degree looks to be back with a vengeance and retains its place as the world’s biggest provider of opportunities for MBA graduates. A reported rise of 29% in MBA job opportunities in the US alone this year is more than double the global average growth rate of 14% and far in excess of the expectations held by the country’s MBA employers this time last year.

QS’s data this year ascribes this dramatic rise, for a market as mature as that of the US, to increases in MBA jobs across the consulting and finance sectors of 24% and 22%, respectively. These were not the fastest-growing sectors, however, with a 37% rise seen in IT/computer services and a staggering 73% hike in opportunities across a resurgent pharmaceuticals/healthcare industry.

Second only to the US for its sheer volume of job opportunities for MBA graduates is India. In a country in which the degree has long been held in high esteem by employers and, indeed, in which options for local provision have multiplied rapidly, a growth rate of 33% this year is comfortably above the already-high 18% growth rate across the Asia-Pacific region as a whole.

Notable industry rises reported by MBA employers in India this year include increases in MBA job opportunities across the following sectors: 59% in construction/property, 47% in education, 33% in HR/recruitment services and 46% in financial services.

Brazil is Latin America’s largest market for MBA jobs in spite of a disappointing year – the market here has contracted on the basis on QS’s survey, although employer respondents expect next year to be better. Even so, Brazil’s fall of 21% has clearly affected the region’s underwhelming average growth rate of 1%.

Where did our sample of employers in Brazil reveal losses to the MBA job market? A 32% drop in new opportunities across its travel/leisure/hospitality sector appears the most damaging. Then again, with 2014’s World Cup (football/soccer) behind us and 2016’s Olympic Games just around the corner, lessened hiring in this sector is perhaps to be expected. The industry’s employers do, however, anticipate a 45% rise in opportunities over the coming year – perhaps a positive outlook for the legacy of these major sporting events.

The UAE is the largest MBA job market in the Middle East & Africa region - treated as a whole for the purposes of QS’s annual MBA Jobs & Salary Trends Report. As with Brazil, this is a position the UAE holds in spite of a contraction of 13% in the number of new opportunities available to MBA graduates this year. This brings the region’s average growth rate down to, in this case, a still-healthy figure of 8%. Unlike the Latin American nation, however, this is not something the UAE’s employers expect to see improve in the immediate future.

Perhaps the country’s previously rapid growth rate has proven unsustainable in the long term, with the numbers received from employer respondents – a 16% drop in the number of new opportunities available in its financial services, for example – a reflection of this.

In fifth place for the size of its MBA job market is the US’s neighbor to the north. Canada can’t quite match the 26% growth rate across the North America region as a whole, but an 18% increase in reported opportunities for the qualification’s holders is still an extremely healthy return for a country whose economy continues to experience difficulties. These issues are, according to Canada’s prime minister, more the fault of external factors, such as global oil prices which could help to explain the hiring attitudes of its domestic employers this year.

Growth of 50% from both Canada’s  IT/computer services and telecoms industries this year are  high points, but a mere 1% rise to its finance opportunities with 2% growth expected next year suggests it’s still a wait-and-see approach for some employers, with national elections taking place later this month.

Singapore is Asia-Pacific’s second-largest market for MBA job opportunities, although employers in the city-state have reported a moderate growth rate of 3% this year – well beneath the regional average. An improved rate is expected next year. This year’s growth, however, can be ascribed to 4% rises in the number of new opportunities within Singapore’s (large) finance and IT/computer services industries.

South Korea is seventh in terms of MBA market demand, with employers in the country posting healthy, if unspectacular, growth of 7% over the past year with the anticipation of a more moderate 2% growth for the coming year.

Home to some the world’s most recognizable names in technology – Samsung and LG to name two - it’s no surprise to see the country’s growth boosted by a reported 15% rise in new opportunities across its electronics/high technology industry. There has also been 5% growth to its manufacturing/engineering sector, but opportunities in both telecoms and pharmaceuticals/healthcare have remained flat for the time being.

China’s burgeoning job market for holders of the MBA degree is the fourth and final country from Asia-Pacific to make this top 10, a strong signifier of the region’s present-day importance in the world of postgraduate business education.

With employers in China reporting a 40% rise in opportunities this year, the East Asian nation also supplies us with the region’s standout figure. This growth has been seen, most notably, in the consulting industry - where survey respondents indicated that MBA jobs increased rapidly over the past year. There has also been a 57% rise in construction/property positions and healthy growth of 23% across each of its finance and IT/computer services sectors.

Peru is Latin America’s success story this year, when it comes to expanding MBA job opportunities – 29% growth matches that of the US, albeit from Peru’s far smaller base. Even so, this puts the Andean nation above Mexico for the sheer size of its MBA demand and second only to Brazil across Latin America as a whole.

Peru’s strong showing can be traced to a considerable rise in consulting jobs as well as strong growth in the pharmaceutical/healthcare and financial services industries, respectively. A country widely known for its metals/mining sector has also witnessed an 8% increase in opportunities in this industry, with expectations of 20% in the year ahead.

Mexico is Latin America’s third entry to the table of MBA demand and completes the top 10. The MINT country’s 19% growth overall has been bolstered by reported rises of 24% in consulting jobs and 17% in finance opportunities for holders of an MBA degree.  Its electronics/high technology sector has remained flat this year, but responding employers expect opportunities to expand by as much as 30% next year.

European markets for MBA graduates dominate rest of the top 20

The top 10 list above should serve to illustrate the MBA degree’s truly global recognition. However, the eagle-eyed among you might note that Europe fails to register a single entrant. This, of course, is more a question of the smaller sizes, and therefore populations, across European nations, than any lack of MBA job opportunities. A country’s market size here also includes the local demand for qualifications attained from local institutions, which can be a markedly different proposition to those awaiting holders of an MBA degree from one of the world’s leading business schools.

Even so, six of the 10 countries who rank between 11 and 20 for the volume of positions available to MBA graduates are European. These countries include Russia and Kazakhstan, which fall under QS’s category of Eastern Europe, and Italy, Spain, Germany and the UK from the more established markets of Western Europe. 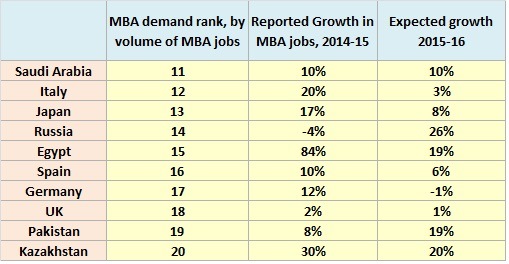 Among these nations, 20% growth in MBA jobs in Italy and 30% growth to positions reported in Kazakhstan are clear highlights. In Italy (ranked 12th overall for market demand) this has been driven by a 45% rise in the manufacturing/engineering sector (the automotive industry is particularly strong) and in Kazakhstan (20th overall) employers note a 49% increase in MBA jobs across the public sector/government/nonprofit industry and a 31% rise in the construction/property industry. Elsewhere, Germany and Spain’s growth rates of 12% and 10%, respectively, make for positive reading, yet the market in Russia has contracted by 4% and the UK has seen only fractional growth of 2% over the past year.

The top 20 picture of a global MBA jobs market is completed by two countries apiece from Asia-Pacific and the Middle East & Africa. Japan’s (ranked 13th for market size) growth rate of 17% should come as particularly good news for what is Asia-Pacific’s most mature market for MBA degree holders and, indeed, for those with an eye on the country’s economic fortunes. Pakistan, which just slips inside the top 20 for the size of its MBA market, is much more of an emerging force and posts an 8% growth in demand this year with greater rises expected next year. The size of the market, like India’s, can be ascribed to the esteem in which the degree is held across South Asia.

Saudi Arabia ranks 11th for overall demand by volume, with employers reporting sustainable expansion to its MBA job opportunities – 10% growth this year is coupled with a prediction of a further 10% increase to come next year. Last, but by no means least, is Egypt - which places 15th for current market size yet reports the fastest growth rate in the top 20. Even if we account for the smaller platform on which this growth is reported and for a political situation that remains far from stable, a huge increase in jobs in Egypt’s financial services is a strong display of desire on the part of the country’s employers to push on.

This article was originally published in October 2015 .