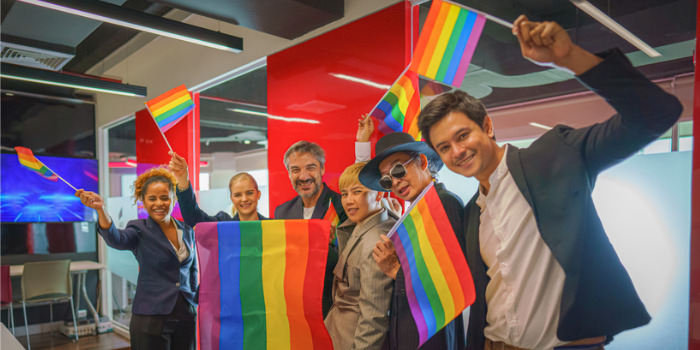 LGBT business
Discover the best MBA programme for you here

Ensuring employees can be their authentic self ensures a more united and harmonious workforce according to ESCP Business School Executive Education's LGBT+ panel.

Although this fact is widely proven across industry, many employers struggle to create an environment where LGBT+ employees can be authentic at work.

Overall, there seems to be a mismatch in how organisations design their diversity policies and how they implement them in the workplace. One of the big hitters - McKinsey & Company - says about US$8 billion is spent on diversity training in the US alone each year.

This is important because, not only do diverse and inclusive teams mean 19 percent greater employee retention, but employees and job candidates say a diverse workforce is important when evaluating a company and job offer.

To commemorate Pride Month, and also open up the floor to promote and discuss LGBT+ inclusion in the workplace, ESCP Business School Executive Education held a panel with members of the LGBT+ community to share their thoughts about why businesses thrive when they ensure everyone can be their true self at work.

Speakers discussed how employers can craft an LGBT+ inclusive ecosystem to increase innovation, positive change and prosperity at their organisations. Panellists also presented best practices as well as the first steps to be taken to develop a diverse work culture.

Organisational changes to be made

Systematic changes need to be made across industry – promoting changes to organisational culture to encourage more LGBT+ employees to find the courage to come out (if they so wish).

When looking at D&I from a broader perspective, Jarman says if people can't feel happy being themselves, they're not going to be settled at work or be as productive, and they're not going to feel comfortable and included in their organisation. This means they will likely leave eventually, with companies therefore losing that talent.

Jarman says it’s important for organisations to work hard to ensure there is an atmosphere of inclusion where, if someone feels they want to come out, they should feel they're able to without fear of negative repercussions.

He said: “It's important that organisations focus on the systemic change that's needed, building the practice of allyship and the capability of our people (particularly managers and leaders) to set the tone of that atmosphere of inclusion, so that people feel able to talk about their personal lives should they choose.”

But Jarman admits it’s a long journey for organisations, with many in different places on that journey, but he says it takes intentionality, commitment and constant focus by individuals and organisations for that long-term culture to change.

Vey agrees with this sentiment – to work towards a culture where everybody can come out without drawbacks. But one thing he thinks will benefit employees are role models – both internal and external – within a company.

Not only LGBT+ role models, but straight allies too, ensuring they are visible and there is an open culture. Vey gives an example of allies utilising stickers that can be put on computers or doors to demonstrate they are supportive of diversity. He said: “This is a very simple thing which allows people to see they are in an open culture. I think this is very important.”

Du Plessis says many people don’t want to come out at work as they don’t want to open themselves up to risk – in about 70 countries around the world, people are still criminalised for having same-sex relations.

He said: “Those laws are applied not just to lesbian, gay and bisexual people, but also trans and intersex people. There are 13 countries which directly criminalise trans people.

“Only 40 percent of countries around the world have any protection in the law for LGBTI people to be protected in the workplace.

“If you come out in 60 percent of the world, you can be immediately fired with no redress at all.

“And even if it's not a risk of being fired, there’s a risk within corporate culture which just says, ‘Well, you're not the kind of person who can be a leader.’”

Beale and Jarman mentioned the situation in the UK whereby the trans community is being specifically targeted.

Beale said: “It's the most dreadful situation, but I think there's an opportunity for business to step in and do something.

“If we have businesses stepping up and talking about these topics openly, they can create a healthy workplace environment, and I do believe that can seep out more broadly into society.”

She recalls that, when Lloyds launched Lloyds’ Pride Network, a colleague – who’d worked there for 30 years – came up to her and said he’d never thought he’d see the day that Lloyds, a 325-year-old institution with centuries of tradition, would have something like this.

“That was having an impact way beyond the workplace. It was seeping into his personal life. I think now there's a great opportunity for business to really step up and do something serious about [the situation in the UK and worldwide] in a collaborative, collective manner to combat some of the hate that's going on.”

Alfes asked the panel how we can differentiate between organisations who take LGBTI+ inclusion and diversity seriously and those which use it for marketing or recruitment purposes, a process known as‘pinkwashing’.

Vey admits it’s a very important subject, but a difficult one, he said: “What really defines pinkwashing? Where do you start? Because it’s difficult to know what’s happening in a company.

“It can be that the company means well and really wants to make changes, but it's not known to the outside world and then it's taken very negatively, or the other way round.”

Vey says it’s important to pinpoint companies doing it for the wrong reason, so his company PrOut gives a platform to the companies not only doing something for Pride Month, but also championing different programmes.

He said: “Sometimes I find the reaction on social media rather sharp, and not based on the real situation in companies. It’s tricky stuff, because for one company it could be a big step to be involved with Pride for the first time, while others only participate to generate publicity.”

Beale admits she wishes she was still CEO at times now she’s semi-retired, as this is something she’s thought a lot about.

When she was talking about diversity and inclusion within the insurance sector, she says she would always look at the management team. She said: “I would see how many women were on there, and how many different racial and ethnic groups were represented.

“If I didn't see diversity at the top team, I didn't think they were very serious about it, because I know as a CEO, you can do something about it and quite quickly.

“I managed to recruit women onto my executive committee having inherited an all-male team. I made sure we had two LGBT representatives, different racial backgrounds, and ethnicities. I managed to make that happen. So, I know that the management team is a real picture of whether a company means it.”

Discover the best MBA programme for you here

This article was originally published in July 2021 .