To MBA or Not to MBA: A Crunchbase-Inspired Guide to Business School | TopMBA.com

To MBA or Not to MBA: A Crunchbase-Inspired Guide to Business School

Have you ever wished for an insider’s guide to applying to business school? The very first step in the application process – deciding where to apply – can be particularly challenging if your career ambitions lie in entrepreneurship.

To ease your pain, I prepared this simple guide for you and in which I will tell you where the brightest entrepreneurs listed on Crunchbase [a database of the startup ecosystem and successful startup founders] – got their degrees and which business schools can help you achieve startup success. Information in the below is primarily based on research concerning the educational backgrounds of Crunchbase entrepreneurs, conducted at SchoolApply.com.

1. Do you need an MBA degree for startup success?

The ultimate question that you are doomed to face is: Do you need an MBA for startup success? Of course, opinions on this matter are as thought-provoking and varied as the individuals who hold them. The MBA degree has become one of the most popular postgraduate qualifications in the US, but the debate over its value continues.

In some startup circles, for instance, business schools have a bad reputation. They cost a lot, lack innovation and are slow in adapting to demand. Many believe that would-be entrepreneurs can learn everything they need through practice – by jumping right in and trying things out. Yet, according to the results of a study coauthored by researchers from UC Berkeley and Stanford, 92% of startups fail [from a sample of 3,200 startups analyzed over a period of three years]. One of the report’s key findings is that founders who learn are more likely to achieve startup success. In light of this, it would be only logical to assume that the trial-and-error method doesn’t apply here and, to succeed, one would need extensive business training.

However, while it is commonly perceived that MBAs show more interest in founding companies, rather than working for them, it appears that in real life, the proportion is reversed. In particular, Harvard Business School reported that although 91% of 2016 graduates accepted job offers within three months after graduation, only 7% of graduates went on to start their own businesses.

As you can tell by these numbers, most Harvard MBA students decided to curb their startup ambitions, at least initially. Indeed, the recent trend is that business schools have started encouraging fledgling founders to focus on coursework, not companies. For instance, Stanford GSB tells its students to wait on startups and focus on classes and campus life instead. But what is it that they teach you in business school that is so valuable that they want you to focus on getting your degree, rather than getting your hands dirty in a startup environment?

If you are an MBA student, especially if you are enrolled in a lesser-known program, networking is going to be a key component of breaking into entrepreneurship. No matter where you go to school, an alumni network will be a huge asset for your future career because a well-consolidated business network gives you a better chance of seizing the best opportunities. You might be surprised, but often it’s less about a school’s brand and reputation here, and more about the strong community that can give you a leg-up in business. Business schools offer an advantage over accelerators or incubators, since they forever hold your networks.

Now that we’ve looked at the benefits of getting an MBA, it’s time to decide which school you are going to commit to.

2. What are the best MBA programs for entrepreneurship?

There is a widespread buzzword in today's media – ‘hustler’. I’m sure you’ve come across it more than once before, since everyone wants to hire hustlers now. In a nutshell, hustlers are people that prioritize the values of innovation and autonomy, i.e. they are able to apply an entrepreneurship mentality to their everyday tasks. This rise of entrepreneurialism has initiated a new trend in business education that has made MBAs in entrepreneurship extremely popular. In an era of highly competitive, unstable markets, rapidly changing economies and shifting business allegiances, the ability to take risks can be your best asset.

MBA programs for entrepreneurship not only provide you with valuable tools to help you increase your chances of startup success, but they also influence your attitude towards risk and teach you how to mitigate risk in order to help you become a true entrepreneur. The following are the top 10 international business schools that headed QS’s Entrepreneurship MBA Rankings 2014. 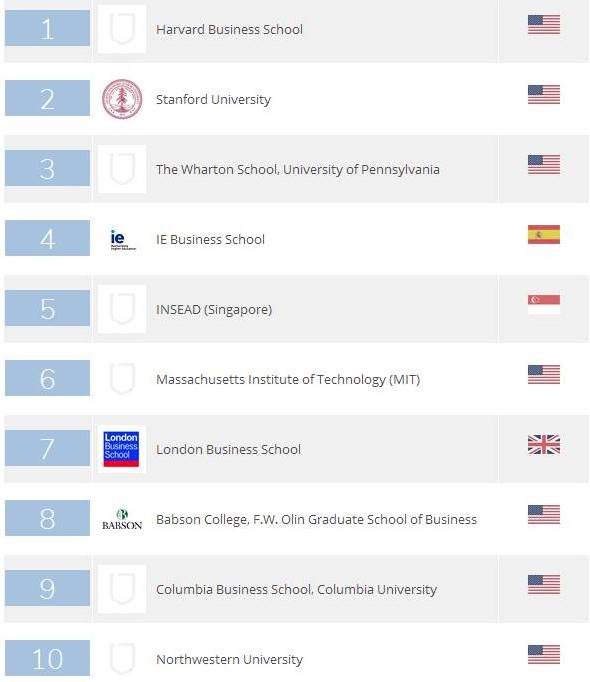 However, many successful entrepreneurs haven’t earned an MBA and share the perspective that it is simply yet another résumé-builder. Although, it’s always better to support such claims with numbers, so let’s take a look at the findings from our research into the educational backgrounds of Crunchbase entrepreneurs.

3. Where would a Crunchbase entrepreneur have gone?

First of all, I need to draw your attention to a surprising result we found: Our study of Crunchbase entrepreneurs showed that 43.6% of Crunchbase founders from our sample received an MBA degree.

However, let’s not forget that Crunchbase data reflects only successful cases, while companies that are featured in Crunchbase could be the second or fifth attempt of a particular founder to create a startup. Hence, many Crunchbase entrepreneurs are likely to have found startup success after a series of failures from which they were able to learn.

Below, you will find a list of the top 10 universities that are leading in churning out successful Crunchbase entrepreneurs (this list was assembled by counting the number of graduates): 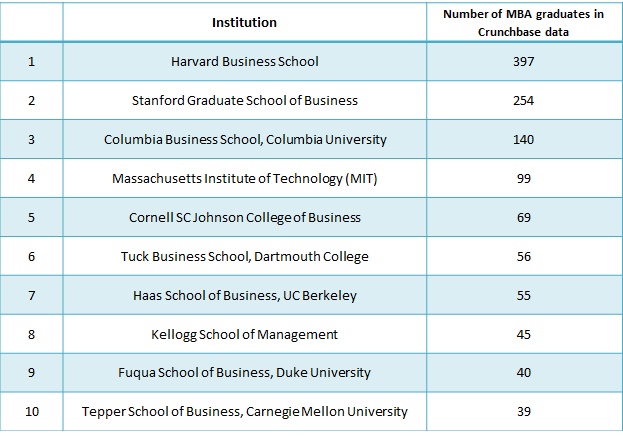 Outside of this top 10, we also discovered quite an interesting pattern – there were many Crunchbase entrepreneurs from our sample who graduated from business schools in China, Brazil, Ireland, India and Israel. My guess as to why these schools appeared in the list is the following: These five countries have succeeded in creating technological hubs and the entrepreneurial expertise that has been accumulating in these regions helps local business schools to train entrepreneurs.

Taking up the challenge of an MBA can be not only be financially rewarding in the future, but personally rewarding as well. If you are passionate, curious, willing to take risks and have the ability to communicate ideas, then you should start looking for your perfect MBA program right now.

This article was originally published in February 2017 . It was last updated in June 2020