How many students start their own businesses directly after graduation and which MBA programs produce the largest amount of entrepreneurs at this early stage?
Download the full MBA ROI report for North America for free

With approximately 30% of prospective students looking at MBA programs with a view to starting their own business and becoming entrepreneurs, it is hardly surprising that provisions designed to support students in this regard have been on the rise for quite some time. Enough time, in fact, for some to even start questioning whether the influence of startup culture is becoming too pronounced at business school.

Be that as it may, budding entrepreneurs stand much to gain from the business school experience. Outside of classroom teaching and courses focused on the skills needed to go it alone in the business world, the access to startup competitions and potential investors through networking opportunities while enrolled often prove invaluable to students.

But, how many graduates become entrepreneurs directly after leaving business school and which MBA programs are producing the highest number of new company founders?

The top 10 in the US & Canada, when sizing up the proportion of graduates starting their own business at graduation, is shown below. Figures are as reported by business schools for the purposes of QS’s new MBA ROI report for North America and, as such, refer largely to statistics from the class of 2014. 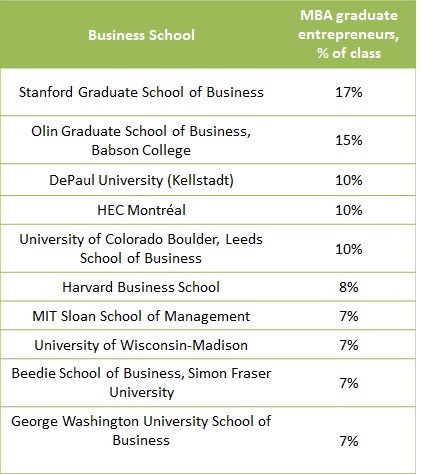 It’s certainly worth noting that a journey from 1st to 10th position among these MBA programs sees the proportion of graduates-turned-entrepreneurs fall from 17 to 7%. This percentage falls further still, to 3%, when looking at those programs placing between 11th and 20th (you can see these schools in the full report).

Among all schools in the sample reporting this information, the average proportion of MBAs launching businesses right after graduation is 2.4%. This might seem a little low if you refer back to the 30% who go into programs with this motivation in mind. However, MBA entrepreneurs aren’t just those who set up shop straight after leaving campus. Many choose to do this a little further down the line, perhaps mindful of the costs incurred during their course of study. In addition, this 2.4% proportion doesn’t extend to those who join existing startups after graduating, with a view to gaining more hands-on experience of what’s required before launching their own endeavors.

Even so, the top two business schools in this table, Stanford GSB and Babson College, stand out by as much as 5% here. This is no one-year wonder as both schools have sustained similar proportions over the past five years. At Babson, annual reports combining both its one and two-year full-time MBA programs show that 17% of students started their companies after graduating in 2012. For 2015, that number is 19%. A four-year average for the school during this time is a little over 17%.

In comparison, the five-year average for Stanford GSB is 16%. This is the same proportion of MBA graduate entrepreneurs as that recorded by the classes of 2011 and 2015, with minor falls and rises taking place in between these dates.

Moving further down the table, the five-year average seen at Harvard Business School (HBS) between 2011 and 2015 is 7.6%, while a look at MIT Sloan’s four-year average between 2011 and 2014 reveals an average of 8%. In the case of HBS, there has been a rise of one percentage point in each of the past two years to a high of 9%, before which the proportion stood at 7% for three years in a row. The recent average at MIT Sloan, meanwhile, is the same as that recorded by its class of 2011, since when it has risen to as high as 10% in 2013, before falling back to 7% last year.

This article was originally published in December 2015 . It was last updated in June 2019