How Imperial Are Using Holograms to Teach MBAs | TopMBA.com

How Imperial Are Using Holograms to Teach MBAs

How Imperial Are Using Holograms to Teach MBAs main image

The future has landed at Imperial College Business School. Known for its innovative nature, and booming developments in the world of EdTech, the business school has become the first in the world to deliver a live holographic lecture to students. 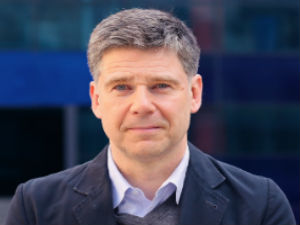 Dr David Lefevre, Director of the EdTech Lab at Imperial College Business School, Imperial College London spoke with TopMBA.com about the ‘crazy’ idea which catapulted Imperial into the centre of the tech world.

The world of holograms

Unbeknown to some – myself included – the hologram was in fact invented by a professor at Imperial in the 1950s for which he won a Nobel Prize.

However, it’s taken decades for us to reach a point where holographic lectures are feasible. Lefevre told us, “Holograms have been around for quite a while, but the problem is, they’ve been really complex until recently.

“Toronto-based hologram company AHRT has built a new type of technology, which is a bit simpler, but works really well, and it’s lowered the cost dramatically.

“We were looking around for a hologram company at the same time as AHRT was trying to move into education, so we partnered with them and we became the first university to trial it.”

Lefevre has high hopes for the future, adding, “The long-term vision is that lots of schools have this technology and people can start broadcasting to each other which is when it really becomes exciting.

“That’s the problem with being the first one, we’re a bit lonely. It’s really going to take off when lots of other universities get it.”

The lecture that changed it all

Imperial and AHRT’s joint venture came to a head for the ‘Women in Tech: The Inside Story,’ lecture, which saw guest speakers ‘beaming in’ via hologram from Los Angeles, New York, and London including Marily Nika, Google Woman of the Year 2018 and Imperial alumna; Tracey Welson-Rossman, founder of TechGirlz and co-chair and founder of the Women in Tech Summit; and Diane Morgan, Global MD of Trilogy and member of the Board of Directors at the Forte Foundation.

But how did the pivotal first lecture go? Lefevre says, “It went really well. That was to encourage our students, our female students in particular, to be ambitious in pursuing tech careers.

“It was really special, and the holograms added a lot of excitement for the students. There was a packed audience and it was a great success.”

Promoting women in the tech sector is something Imperial feels strongly about, according to Lefevre. He says, “As a technical university we know how underrepresented women are, and it’s a waste.

“We wanted to expose our students to women who are leading firms or launched tech start-ups and offer some role models that change their perception of who can succeed in the tech sector.”

Lefevre admits there has already been interest surrounding the technology. He says, “Our media are talking to a number of business schools globally, and there’s been a lot of interest from our friends and partners.

“Faculty are collaborative on an international scale, and they want colleagues from overseas to talk in their classes, and this technology means guest speakers can routinely appear.

“We should see it facilitating all kinds of collaboration to really enhance the student experience. We do imagine this becomes far more common from now on for business schools.”

Lefevre adds, “You could use Zoom or Skype but what you don’t get is that realistic interaction, that ability to look someone in the eye and the hologram is a much greater sensitive presence, and that’s the point of it.”

Although Imperial is leading the way in hologram technology, Lefevre admits the market has become more competitive and the department has to continually up their game, which ‘can only be a good thing for students’.

He says, “We’re planning all kinds of events. Our students are making a presentation by hologram in a few months’ time.

“We’re making a hologram presentation to ESADE business school in Barcelona, rather than jumping on a plane. And one of our faculty members wants to bring in one of his colleagues from the University of Toronto to the classroom.

“Because we’re the first, we’re limited to the locations we can beam from, but my expectation is it will become pretty commonplace.”

Putting the human in technology

Since the launch of Imperial’s EdTech Lab in 2005, the department has gone from strength to strength. Lefevre says, “Because we’re a college of science, technology and medicine, the students come with very high expectations.

“They hear about Imperial’s reputation and think ‘Wow I can’t wait to get to Imperial because the tech is going to be amazing,’ so we have to fulfil those expectations.

“It’s a bit different to most business schools, we have no choice but to really embrace it and do something special. We’ve been investing heavily in tech for longer and to larger scale than any other business school in Europe.”

However, the notion that technology could take over human interaction has been a concern for people with no ties in the tech sector. But Lefevre admits, this won’t be the case at Imperial.

He says, “One of our themes is ‘putting the human’ into technology. We don’t want the learning experience to be depersonalized, and technology software systems to take over.

“We think learning is a very human and personal process, so we always use technology to facilitate that human interaction, rather than just synthesizing it, which we think would be a) ineffective and b) an awful experience generally for students.”

In an everchanging world where technological advances happen constantly, Lefevre admits there’s no way of predicting what the tech world holds.

“It’s very difficult to predict the future, as a year ago we didn’t imagine we’d be working with holograms.”

Although it can be difficult to pre-empt technological advances, that doesn’t mean the EdTech Lab isn’t doing all it can to prepare for the future. Lefevre says, “We have a set of core values and principals we use to navigate how we react to changes in the market, with new technology that comes along. A commitment to quality and a commitment to education first."

The lecture in action

This article was originally published in December 2018 .

30 Years On, What Can We Learn from the Creator of the World Wide Web?

How COVID-19 Is Changing Graduate Recruitment