How many students are signing into the top online MBA programs from outside the shores of the country from which they are offered?

One of the main benefits of online and distance learning is that it gives students the freedom to study in a place of their choosing – no matter how far that place is from their educational provider.

It therefore stands to reason that online MBA programs ought to be attractive to international audiences. Although many of the world’s best options will require you to come onto campus every now and then, there’s certainly no need to relocate and no fear of lengthy visa complications for international students.

However, the numbers of international students (in this context, those based outside the country from which a program is offered, rather than nationality) enrolling in online MBA programs offered from the US don’t come close to proportions typically found in the country’s full-time campus programs. This suggests that their institutions are first and foremost targeting a domestic audience with their distance learning offerings. Conversely, online MBA providers in Europe are far closer to matching the proportion of international students we see enrolled in their full-time programs. The difference is palpable.

International students make up fewer than 6% of those who enrolled in 2014, on average, across the 17 US programs listed in the QS Distance Online MBA Rankings 2016. The only schools to hit double figures are Florida International University and the University of Houston-Victoria, with 10 and 15%, respectively. Five programs recorded an international audience that was beneath 1% of the class total. 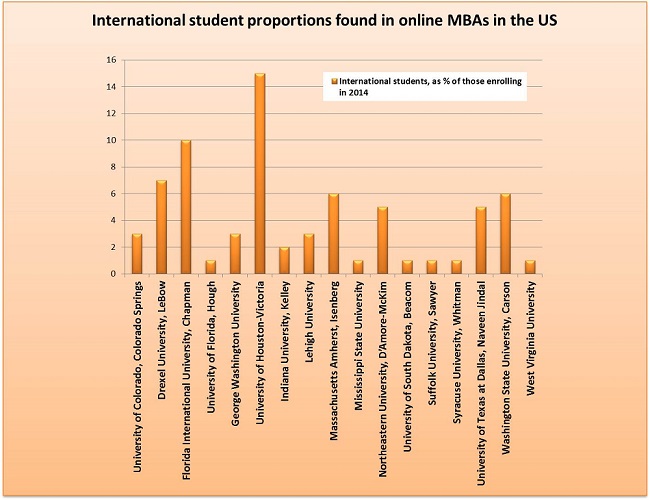 It therefore seems clear that attracting an international audience is not a primary motivation for these online MBA programs. Instead, they appear focused on widening the reach of their offerings in the US, affording those who are committed to their current jobs a means of study, even if they live in an altogether different state from their business school of choice. The US is, after all, the world’s fourth-largest country by area. The students enrolled in these programs are also making an active choice to study domestically – underlining the appeal of US business education (an appeal that has always been particularly strong with US students).

International students in the majority among European options

In stark contrast to this, the average proportion of international students stands at 71% across 10 European institutions in QS’s ranking. Just one school registers under the 50% mark for 2014 – Open University – while IE Business School and Alliance Manchester both surpass 85% in their programs. 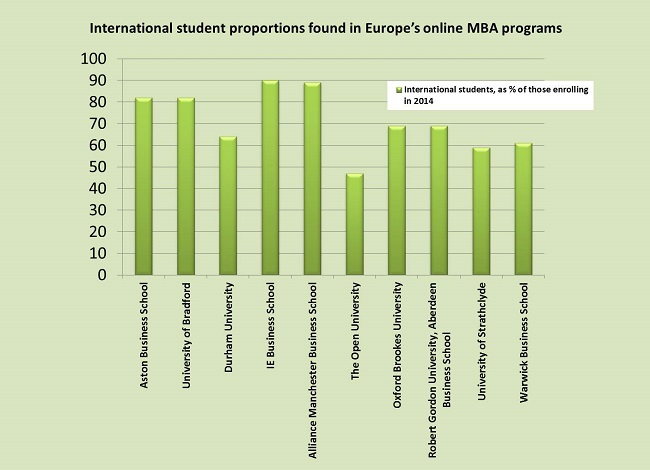 Of course, these proportions are strongly influenced by the relatively small size of most countries within Europe and the proximity of their neighbors, coupled with the relative ease with which one can move and conduct business within EU borders.

For these reasons, on-campus MBA programs in Europe also attract high proportions of international students – often higher than 70% at that. In fact, the average proportion among the 65 European business schools listed in the QS TopMBA.com Global 200 Business Schools Report  is 76%.

Even so, the best in-person and online MBA programs offered from Europe do at least resemble each other for international diversity, whereas the same cannot be said for those offered from the US, at this moment in time.

This could be an important consideration for those trying to decide which online MBA might be the right fit for them. Some applicants might prefer to interact with a class predominantly made up of people based in a single country. Whereas, others will be drawn to one in which anywhere up to 90% of your fellow participants can be classified as international students. Either way, it’s important to inform yourself of such differences and pick a program that will give you the type of learning experience you are hoping for.

This article was originally published in March 2016 . It was last updated in February 2021

Why Business Schools Can be Perfect Partners

How to Organize your Routine When Working from Home