While we are confident that the carefully-honed methodology used in the QS Global MBA Rankings 2018 offers a comprehensive view of the global business education landscape, we also acknowledge the value of looking at other established rankings on the market. No single ranking can ever give a completely full picture of a business school or program.

It is essential to understand the methodologies behind each ranking, so you can prioritize business schools based on the things that matter most to you. Every student has very different expectations and requirements from an MBA program. Some will put more emphasis on the diversity of the class. Others will ultimately be more driven by careers and salary outcomes.

While the overall positions differ slightly between the two sets of rankings, it is worth noting that seven business schools appear in both top 10s.

Another reason for the discrepancy could be the fact that the FT don’t take alumni outcomes into account in the way that the QS Global MBA Rankings 2018 do. Notable alumni of HEC include Pascal Lamy, the former director general of the World Trade Organization, and François Hollande, the former President of France.

Oxford Saïd Business School provides another example of a standout difference between the two rankings. While the QS Global MBA Rankings 2018 has the institution in 9th helped by strong performances on thought leadership (2nd), employability (15th) and return on investment (17th), the FT has them well down the list in 27th.

After two years of topping the FT Global MBA Ranking, INSEAD have been knocked off of the top spot by Stanford Graduate School of Business, up from 5th in 2016 and 2nd in 2017. Other big movers include University of Cambridge Judge, yo-yoing back down to 13th, after a 5th place position last year and 10th in 2016, and Ceibs, who continue a remarkable rise up the ranking from 17th in 2016 (11th last year) to a place within the top 10 (8th).

But, of course none of this is the biggest talking point from the latest edition of the FT Global MBA Ranking. That is reserved for the fact that IE Business School has dropped off the list completely, after being ranked 8th last year. They have been excluded this year as the FT were unable to collect a representative sample of the program’s Class of 2014 alumni. Regardless of the reason for the omission, it is certainly strange to see any ranking of MBA programs without what is unquestionably one of the best business schools in Europe appearing on it.

What do the FT Global MBA Rankings 2018 concentrate on? 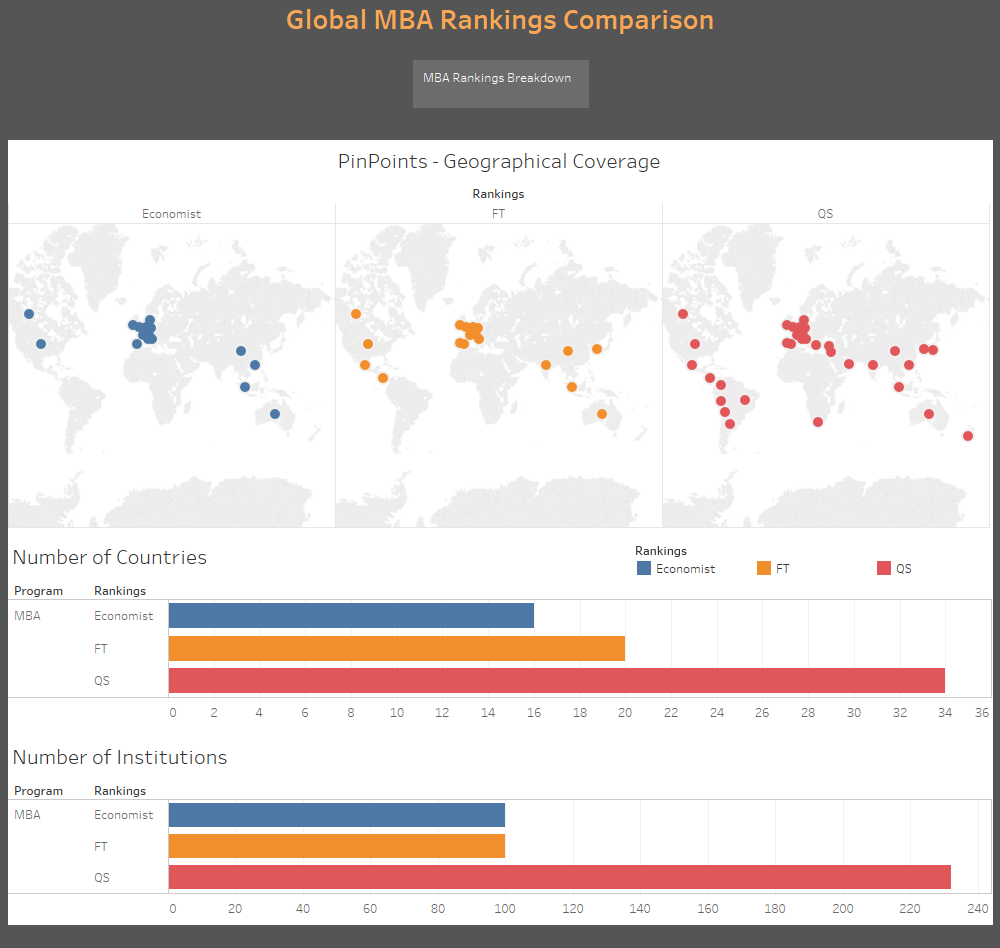 The FT’s rankings are of particular interest to prospective students looking for programs that have a focus on international diversity (20% weighting) and a high quality of faculty (20%). The most-prominent indicator is salary (40%). This represents at least double the weighting of other prominent global MBA rankings.

As QS CEO, Nunzio Quacquarelli, says, “The FT Global MBA Ranking place a major focus on the earnings of MBA alumni three years out of business school. For candidates interested in consulting or banking this provides a useful guide, as these industries tend to pay the most three years after graduation.”

So, if you’re looking for a salary-centric ranking then it’s certainly worth considering. However, placing so much emphasis on salary comes with its dangers, on to which we shall soon come.

The fact that the methodology of the FT Global MBA Ranking has remained relatively consistent since their first full-time MBA ranking in 1999, also allows us to compare the performance of specific business schools over a number of years, based on similar criteria.

What are the negatives of the FT Global MBA Ranking 2018?

Due to its reliance on salary information to produce an overall ranking, the FT is very sensitive to exchange rates. As head of the QS Intelligence Unit, Ben Sowter says, “Clearly salaries are an important factor for many MBA applicants. However, placing too much emphasis on financial measures can lead to outcomes that are very sensitive to currency fluctuations and may, to an extent, be measuring economic strength over school strength”.

Quacquarelli also has issues with the reliance on salary information, “Because of the focus on salary three years after graduation, there is an inbuilt bias towards schools which feed the consulting and banking industries, which are no longer the ambitions of a good percentage of MBA graduates. Starting their own business, joining a technology company, or a mid-size growth company, heads the list of the majority of today’s MBA graduates.

Another criticism that has been levelled at the FT rankings is the use of self-reported data from alumni when calculating the salary indicator. While one would hope that respondents will answer questions honestly, it would be dangerous to take this for granted. It doesn’t take much stretching of the imagination to question whether some alumni might exaggerate their salaries in order to help out their institution (or themselves). Another issue that arises with this reliance on the alumni survey is that while the FT require a minimum 20% response rate, some response rates will be considerably higher, making a like-for-like comparison troublesome to say the least.

While alumni might only contribute to eight of the 20 criteria that make up a school’s overall total, those eight criteria account for 59% of that total. Considerably higher than the school’s responses (31%) or the FT’s research (10%), highlighting how influential former students are on the outcome of the rankings. In comparison, the QS Global MBA Rankings 2018 place more emphasis on the business schools themselves to provide relevant data (42.5%) and employers of MBAs (35%), rather than the MBAs themselves, using MBACSEA standards as a measure of quality and comparison.

While the FT concentrate on three-year post-graduation salary, and salary increase, we believe it is important to take a longer-term view on financial benefits.

We concentrate on a number of elements including salary increase, cost of living and international tuition fees to calculate a 10-year ROI indicator.

We also put more focus on alumni outcomes and entrepreneurship (15%) as we believe this is central to the life goals of many prospective students. We track over 49,000 CEOs, executives and board members at the biggest companies in the world and their association with relevant programs. This provides us with rich data for this key indicator. As the only global ranking authority to consider employability in this way, our ranking provides a unique lens through which to view business schools.

This article was originally published in November 2017. It was updated in January 2018.

This article was originally published in January 2018 . It was last updated in May 2019