Whether Barcelona was founded by the mythological figure of Hercules in the course of his famous twelve labors, or by Hannibal’s father remains the stuff of legends, but what is clear is that the city itself is of huge historic significance with archaeological evidence of human settlement in the area said to date back as far the sixth century BCE.

The capital of Catalonia, Barcelona has long been an important world city; from the location of one of the earliest foundations of banking in Europe at the turn of the fifteenth century, to the host of eight UNESCO world heritage sites, to the home of one of the most dominant football clubs the world has ever known, there are innumerate reasons why people might wish to study in Barcelona.

Pursuing an MBA in Barcelona puts students at the heart of Iberian trade, banking and technology. It is also home to some of the top business schools in Europe, such as IESE and ESADE.

If you are a fan of arts, culture, history, wine, food, sports and - let’s not forget - business, then getting your MBA in Barcelona might be a perfect fit. This guide will help you learn about the universities, culture and prospective MBA jobs in Barcelona.

ESADE is part of Barcelona’s Ramon Llull University and is one of the top business schools in Europe. While the opportunity to study in Barcelona is exciting in and of itself, the school features many opportunities to study outside of Spain in locations such as Beijing, Silicon Valley, Shanghai, Buenos Aires and Santiago de Chile.

ESADE offers several different MBA programs including a full-time MBA in Barcelona, an executive MBA in both Barcelona and Madrid, a global executive MBA offered in conjunction with Georgetown University in the US, and a Spanish-language MBA offered dually with Chile’s Adolfo Ibáñez School of Management which sees students journey around the world on a one-week every two months basis. 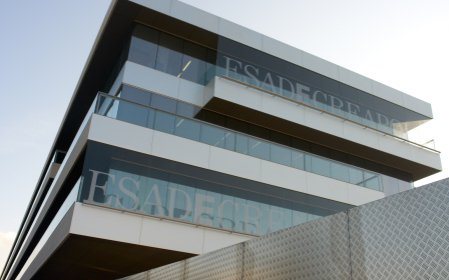 IESE – the graduate business school of the University of Navarra – is another of Spain’s top business schools and is another school with a firm focus on the global. IESE has campuses in Madrid, New York and Munich, in addition to its base in Barcelona.

The school’s MBA – held to be Europe’s first two-year program – was launched just over 50 years ago, in 1964.The school encourages connection with its Spanish roots, offering a Business Spanish learning program for MBA students as well as the option for advanced and native Spanish speakers to graduate with a bilingual MBA diploma.

Aside from the full-time MBA, the school offers an executive MBA in Brazil as well as in Spain, and two further EMBA degree options that provide an international outlook through cross-continental components. The school’s global reach is emphasized through its alumni network of 50,000, which spans more than 100 countries.

If you’re looking for a wide variety of customization options within your degree, then the roster of MBA specializations available at EU Business School might be worth a look.

Barcelona is one of the multi-campus institution’s four locations (the other three being in Geneva, Montreux and Munich) at which one can take any one of 11 MBA specializations on a full-time basis across one year, or part time over two years. The list of specialization options includes International business, global banking & finance, entrepreneurship and sports management.

EADA Business School is one of the six institutions behind the online EuroMBA, featuring in the most recent QS Online MBA rankings.

Aside from this, EADA, founded in 1957, offers both full and part-time MBA programs from its campus with options to study in either English, Spanish or a combination of the two.

The city’s diverse business landscape means that there is ample opportunity to find post-MBA jobs in Barcelona across any number of. Here are some of the larger companies at which you might find jobs in Barcelona:

Along with a long-standing history in finance and trade, Barcelona is also home to a stock exchange (Borsa de Barcelona) and can offer several opportunities in the automotive industry. Nearby Martorell is home to SEAT’s corporate headquarters and Japanese company, Nissan, has one of its key European bases in the Catalan capital.

Barcelona has a thriving tech scene, in part due to its [email protected] District, an urban renewal project that has seen the historic industrial district of Poblenou transformed into a powerhouse of technology and knowledge. The district hosts research and training centers, universities, startups and established tech companies, including Facebook and Amazon.

Barcelona is a cultural giant among European cities. It is synonymous with the architecture of Antoni Gaudí, whose work on buildings such as the church, la Sagrada Família can be found throughout the city, as well as the beautiful Park Güell.

Barcelona is famed for its nightlife and music festivals, which attract revelers from every corner of the world. It also ranks highly in the gastronomy stakes – Barcelona boasts 24 restaurants with either one or two Michelin stars.

From the business perspective, it is worth remembering that the cultural legacy of the siesta can still be seen from the way in which some small businesses and shops close between, most commonly, 1:30 and 4:30pm. However, larger businesses with an eye on global markets and consumer appeal won’t be doing this – although there is a tendency to take a longer lunch break and then work on later into the evening.

Barcelona is the second-largest city in Spain, but it is the 4th most-visited city in Europe, more popular than any other Spanish city. Sandy beaches, a thriving art scene, historical monuments and a sporting legacy are attractions for tourists and students alike.  Both Spanish and Catalan are spoken throughout the city, though Spanish remains the language of most businesses.

Best Business Books to Gift this Christmas
Are you thinking of what to get the business student in your life for Christmas? We have some inspirational business books that will do just the trick.

How An EMBA Can Help You Become A Global Leade…
Here's how an EMBA turned an exec into a global leader.

Business Schools Must Drive Inclusive Growth,…
TopMBA caught up with Professor Anne-Valérie Corboz, newly-appointed Associate Dean of Executive Education at HEC Paris, to find out what the future holds for business schools.