A new egg-based restaurant, Yolkshire, is about to take the world by storm. We speak to the founder about how his MBA will take it there.
Read more about MBAs and entrepreneurship

Think omelets and sunny-side up eggs are just for breakfast? Think again. Yolkshire, an exciting new egg-based restaurant, is the brainchild of Indian entrepreneur and HEC Paris MBA student Varad Deshpande. TopMBA spoke to him about his MBA experiences and how Yolkshire may soon be revolutionizing the restaurant market.

The idea - for a high-quality restaurant focused on the humble egg - occurred to CEO Deshpande during his undergraduate studies in Pune, India. He tells us that he noticed a popular egg cart outside his university, which while frequented often by male students and workers, was eschewed by women and children. He realized that with a few small changes, primarily a focus on quality, standards and taste, that the business could be a success.

With the help of two investors, he opened up the first ‘Yolkshire’ while still at university – which was not without its difficulties. Studying and starting a business might have been tough, but it was essential to ensure that he didn’t lose the opportunity or risk someone coming to market first. Indeed, he mentions that his restaurant has often had issues with rivals – “There were people trying to copy us, but they’ve all failed.” he says, “They didn’t offer what we do.’ 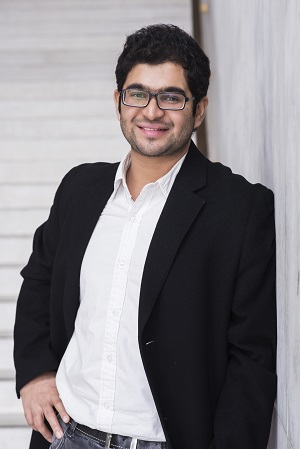 Cracking on at HEC Paris

Yolkshire’s unique selling point is the range of products on offer: where their competitors stick to Indian-inspired foods, Yolkshire offers something for every taste – from French to Mexican, Lebanese to British. The company has three restaurants so far and are looking to expand further which, Deshpande says, is the reason for his MBA.

Scaling a business creates a plethora of new challenges, for Deshpande, his MBA education offers the solutions. He feels his MBA course at HEC Paris provides him with the knowledge and expertise he needs to run his growing company, allowing him to pursue a more “holistic” approach to his business. As for why he chose HEC Paris, Deshpande says, “I wanted to truly learn, I wasn’t interested in just getting a certificate.” He mentions the quality of the institution (HEC Paris is one of the top 20 schools in the world, and is ranked in the elite global category in the QS Global 250), the small class sizes, facilitating peer-to-peer learning, and the international representation, with 39 different countries represented on his course.

Additionally, the European location provides Deshpande with the opportunity to learn about European restaurants and food traditions. Paris, as the home of culinary excellence, offers an in-depth look into successful restaurants and how they function.

Being a good egg: Farm-to-fork sustainability

Deshpande tells us that his time in Europe has directly impacted his vision for the business. He began his enterprise with the intention to make the world better, and his company has always been dedicated to recycling, but one thing he hadn’t come across before Paris was the idea of ‘sustainability’.

“It was not something I had thought about at all before I came to Europe. We always tried to be sustainable, we separated our trash, we used recycling and biodegradable packing – but true farm-to-fork sustainability is something else.”

‘Sustainability’ is a trending concept right now, with many consumers, especially in the West, demanding higher standards from businesses. Yolkshire is modelled on a typical European café; running a responsible, quality-focused business model is very much in this tradition. In fact, this is where the inspiration for their brand name stems. Deshpande was looking for something which represented Europe while also referencing the egg-based nature of the restaurant, so he settled on a play of the world’s most beautiful place – Yorkshire, in England (coincidentally the home county of your humble correspondent).

Given the uniqueness of the idea, the success already had by the three current establishments and now the power of an MBA from a world-class business school in the city of culinary excellence, you may well be seeing a ‘Yolkshire’ crack open near you soon.

Read more about MBAs and entrepreneurship

This article was originally published in September 2017 .