How does an MBA in Europe's program cost affect its payback period thereafter?

The payback time on a full-time MBA in Europe, where programs typically run for one rather than two years, is - as one might expect - faster than that seen among two-year degrees.

Some countries within Europe offer faster payback times (defined as the time taken to earn back your full-time program’s tuition costs as well as the employment earnings sacrificed for its duration) than others. This may be a short-term aspect of ROI (return on investment), but it’s an integral one nonetheless.

In a new ROI study of 46 business schools in Europe, the payback time on a full-time MBA program experienced by graduates was quickest in Germany, where it took just under two years (23 months) to recoup the initial outlay and loss of earnings.

In other countries there are similarly short payback times, for those weighing up the continent’s attraction from an ROI perspective. In Spain, France and Switzerland the average payback time was 28 months, whereas in the UK it was 32 months. The total sample’s average was 30 months – or rather, two and half years.

Does a cheaper MBA program have a shorter payback time?

However, individual program costs vary considerably from institution to institution. Again, as one might expect, the most reputable business schools tend to command the highest fees. So, prospective students must be mindful of their initial outlay and how long it will take them to cover the costs of their investment as an MBA graduate.

But, how do MBA program costs in Europe measure up to their payback time? Logically, the cheapest MBAs in Europe should be easier to pay off than their more expensive peers and allow you to start enjoying your ROI a bit sooner.

Below are the 10 schools with the lowest MBA program fees reported in the inaugural QS Return on Investment Report European Full-Time MBA, and their payback times in months: 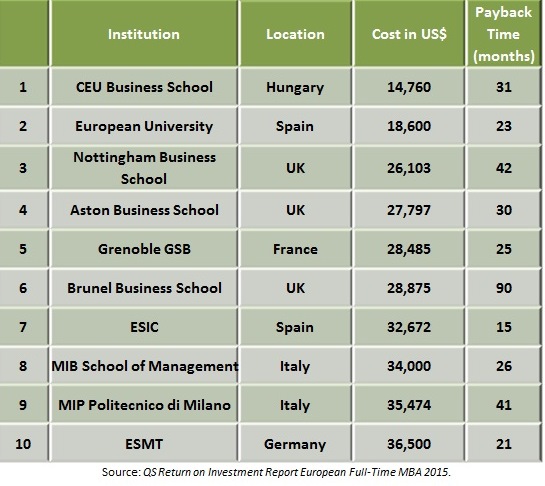 The average payback time among these schools is 34 months. This is actually higher than that seen across the report’s total sample of 46 business schools, where the payback time averages out at 30 months.

Admittedly, there is a rather large range in the times above and, if you remove the highest figure seen (90 months), the average is brought down to 28 and under the total sample’s average - but, not by much. If you now also take out the group’s lowest payback time (15 months) then the average evens out at 30.

How, then, does this compare to the 10 highest MBA program fees in the sample? 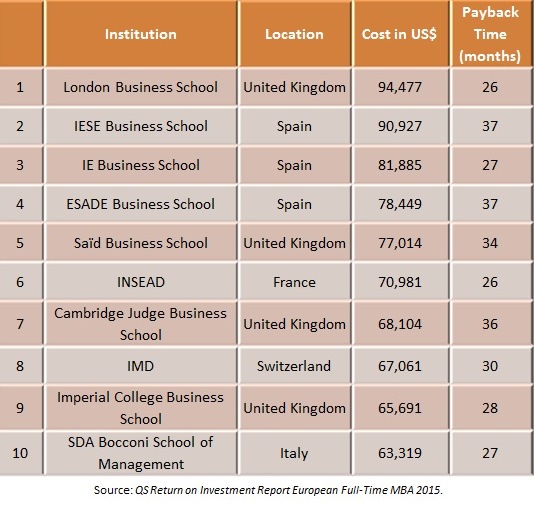 Between these 10 schools, which make up nine of top 10 business schools in Europe this year, the average payback time is 31 months – just one month over the total average. The range seen among these schools is also much narrower than those with the lowest MBA program costs.

In this light, it seems that the amount of money you put into an MBA in Europe doesn’t have a significant impact on how long it will take for you to consolidate this aspect of ROI after graduation. What you put in will invariably be reflected in the salary you receive thereafter, as an MBA graduate.

This article was originally published in January 2015 . It was last updated in December 2015

See the schools with the shortest payback period in the full report!
ROI reports
ROI