Is a business school's research output important to you? Check out the top 10 as per UT Dallas' ranking.

Is the quality of research emanating from a business school an important factor among those choosing where to study their MBA? A 2014 survey of MBA applicants from around the world suggests it is – with research and faculty quality being considered more important to their school selection process than an institution’s career placement record or available specializations.

There’s good news for the Wharton School, then, as it has retained top spot in a business school ranking that focuses on research productivity across major business and management disciplines – a position Wharton has held in all 10 editions of a ranking launched by UT Dallas’ Naveen Jindal School of Management back in 2005 (you can read about some of Wharton’s research here).

The top 10, from a total of 100 listed in the business school ranking, is entirely composed of US institutions. But, there are places in the top 25 for INSEAD (11th), Rotman (18th), HKUST (21st) and London Business School (25th). UT Dallas’ Jindal School itself comes in in 12th position, rising from 17th last time round.

In the top 10, MIT Sloan saw the biggest improvement on its position last year, moving up from 8th to 3rd place. There were also gains for USC Marshall and Columbia Business School, which moved from 10th to 7th and 12th to 10th respectively.

While Chicago Booth dropped out of the top 10 in falling from 9th to 14th place, the Ross School and Kellogg School of Management both dropped two places but held on to places in the top 10. Meanwhile, Stanford and Duke Fuqua both had to make do with places outside the top 10 for the second year running in this business school ranking. 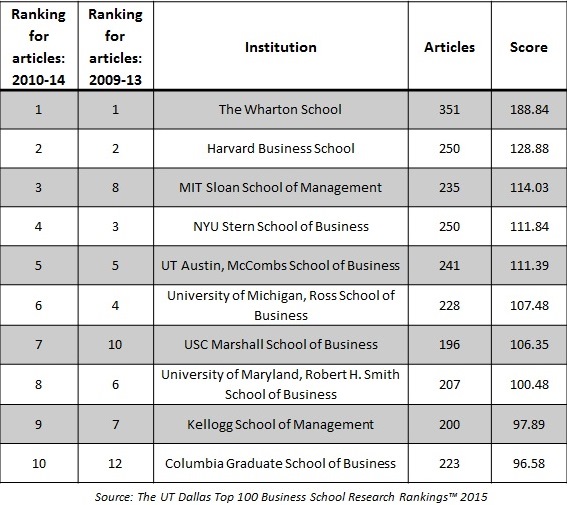 Each edition of the business school ranking, officially known as the UT Dallas Top 100 Business School Research Rankings™, looks at research articles published over a five-year period. Therefore, the new 2010-4 ranking only differs from last year’s assessment in the addition of articles published in 2014, and removal of those from 2009.

UT Dallas’ Jindal School looks at the number of articles each school contributes to 24 peer-reviewed academic journals in the allotted timeframe, producing a score that takes single and multiple authorship into account, as well as cross-institution collaboration.

In this, the size of a business school’s faculty will have clear implications on its research output and much boils down to the choice of journals covered - those included in the Jindal School’s remit include The Accounting Review, Information Systems Research and the Journal of International Business Studies.

This year, an academic portion was added to QS’s regional MBA rankings for the first time. In the 2014/15 edition, the opinions of over 7,000 academics in the fields of business and management were surveyed alongside those of more than 5,000 MBA employers. Wharton also enjoyed a first-place position here, albeit one which it has to share with Harvard Business School and Stanford, at the helm of the North America ranking this year.

This article was originally published in February 2015 . It was last updated in October 2019