Our recent QS TopMBA.com Jobs & Salary Trends Report 2018, based on the respones of 3,463 employers across the world highlights the current strength of the MBA employment market. 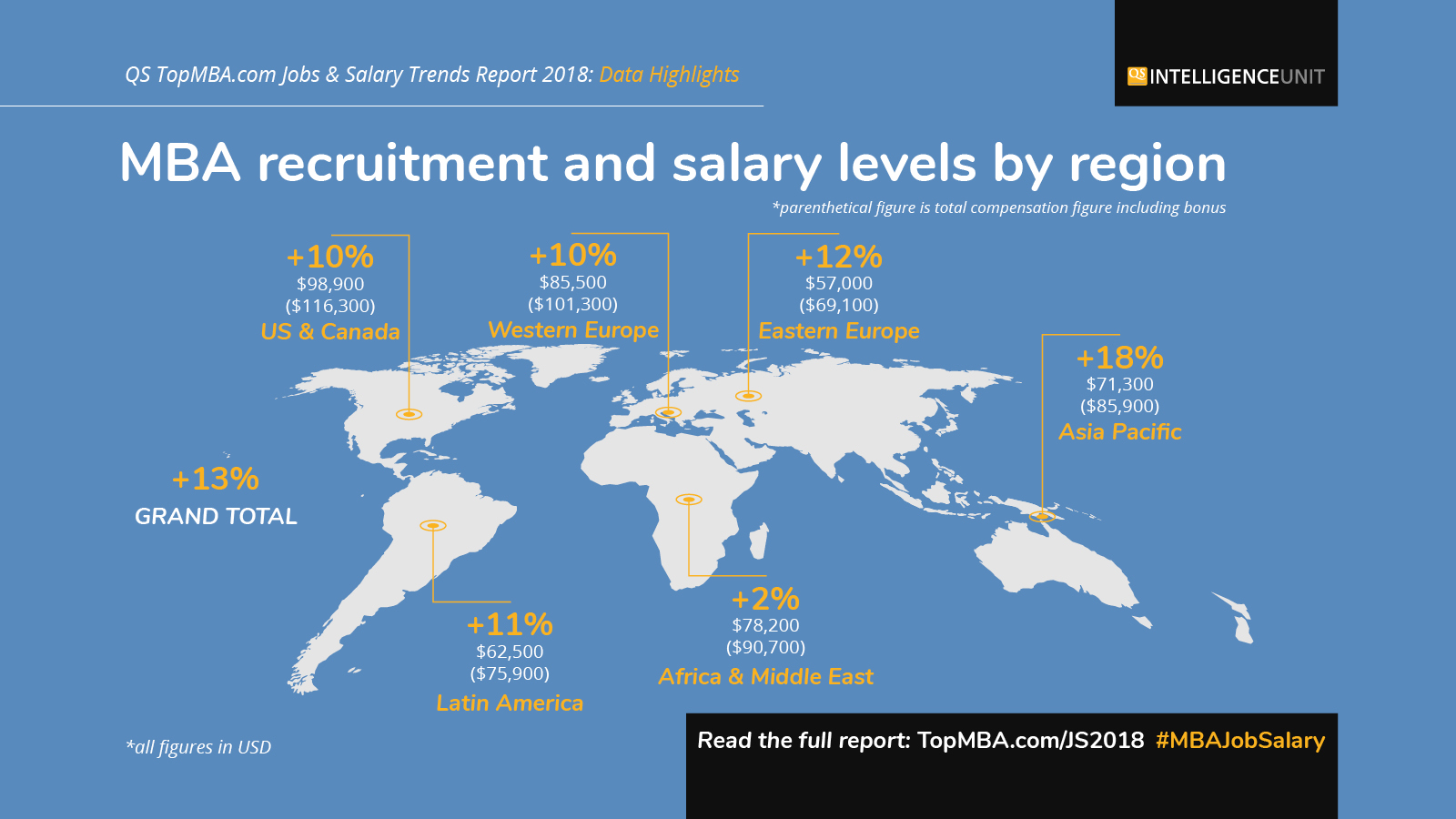 This year has seen a 13% rise in global MBA hiring, and continues the steady annual increases we have seen over the last decade. To put things into perspective, MBA hiring levels are now three times higher than pre-2007 financial crisis levels. While the global outlook is pretty positive then, it’s worth looking at a regional breakdown to understand where in the world the MBA is deemed most valuable, and where your MBA can bring you the most financial reward.

When we released the previous edition of the Jobs & Salary Trends Report, employers in the US & Canada were very conservative in their prediction for increase in hiring levels, estimating just a 3% rise in 2017. In reality, a 10% increase in hiring levels across the region far exceeds this and has led to a more ambitious (if somewhat still on the conservative side) forecast of a 7% increase for 2018.

In terms of salary the US & Canada is still very much the place to be for MBAs. After last year’s slight dip, compensation in the region has bounced back strongly and is now very close to 2015’s record-high MBA salary levels. While bonus packages are down, average total compensation packages for the US (US$120,900) and Canada (US$111,100) can only be bettered by Switzerland (US$140,900).

Asia Pacific is the real success story to come out of this edition of the MBA Jobs & Salary Trends Report. While employers were confident that hiring levels would substantially increase in 2017 (a predicted 13%) the figure easily outstripped even those lofty expectations (18%). However, as this market reaches maturity, employers do expect the increase in hiring to slow down in 2018 (7%) and in 2019 (2%).

While MBAs might not be able to extract the same levels of salary available from US employers, an average total compensation figure of (US$85,900) shouldn’t be sniffed at – even if it is slightly down from the 2016 figure (US$89,000), due to lower bonus payments. This is especially true when a lower cost of living in some of the region’s major countries is taken into account. Highlights in terms of total compensation packages include Australia (US$116,200), Singapore (US$105,300) and Japan (US$80,000).

While all other regions impressively outstripped their predicted hiring level increases in 2017, Africa and Middle East is the one disappointing story to come out of the 2018 report. The marginal 2% predicted increase is in line with predictions; next year’s prediction is even less positive (-2%). However, the region expects to recover in terms of hiring levels going into 2019 (10%) so it may just be a case of weathering the storm whipped up by fluctuating oil prices.

In terms of salaries in the region basic salaries are up 16% year-on-year. However, the fluctuation of bonus packages means that overall compensation has remained pretty static in 2017 (US$90,700) in comparison to 2016 (US$89,400). With a lower cost of living in the region, these figures are still very impressive, though they must be read in the light of a smaller employer base.

Hiring in Latin America grew 11% in 2017 against a predicted increase of 5%. As the market continues to grow in the region, employers are confident that they will see similar increases in the next couple of years; 9% next year and 10% in 2019.

Eastern Europe & Central Asia (EECA) saw strong hiring increases (12%) in 2017 compared to predicted growth (10%). Employers in EECA expect growth in MBA hiring to slow down in 2018 (3%) and even contract in 2019 (-3%). With the soccer World Cup taking place in Russia in 2018, it is hoped that the boost to the region’s economy will result in these predictions being improved upon.

While basic salaries have increased by 15% in the region, with the average MBA commanding a salary of US$57,000, total compensation in the region has actually decreased 6% (US$69,100) due to tumultuous bonus levels. This now puts the region bottom on the list in terms of total compensation, but as previously mentioned, when cost of living is factored into the equation, the advantage of an MBA to salary levels are clear.

Finally, we take a look at Western Europe, where the (2% predicted) rise in hiring levels was blown out of the water (10% actual) in 2017, despite ongoing political upheaval in the region. This uncertainty is likely to be the reason why predictions for 2018 (7%) and 2019 (5%) remain relatively conservative – though improved on previous years’ predictions.

Western Europe is also home to the country with the highest salary. For those that are after the really big numbers Switzerland can’t be beaten, where the average total compensation is a whopping US$140,900. As expected, countries in Western Europe feature prominently in our non-exhaustive list of top 10 countries by total compensation with the United Kingdom (US$122,900), France (US$116,200) and Italy (US$111,800) all joining Switzerland on the list, with Germany (US$94,100) just missing out in 11th.