There are positive stories wherever you look when breaking down data gathered from the QS TopMBA.com Jobs & Salary Trends Report 2018 by industry. While the average growth in hiring across all industries in 2017 has been very positive (13%), and the average basic salary contiunes to grow both in the US & Canada (US$98,900) and Western Europe (US$85,500), what are the job prospects and salary levels like in your industry? 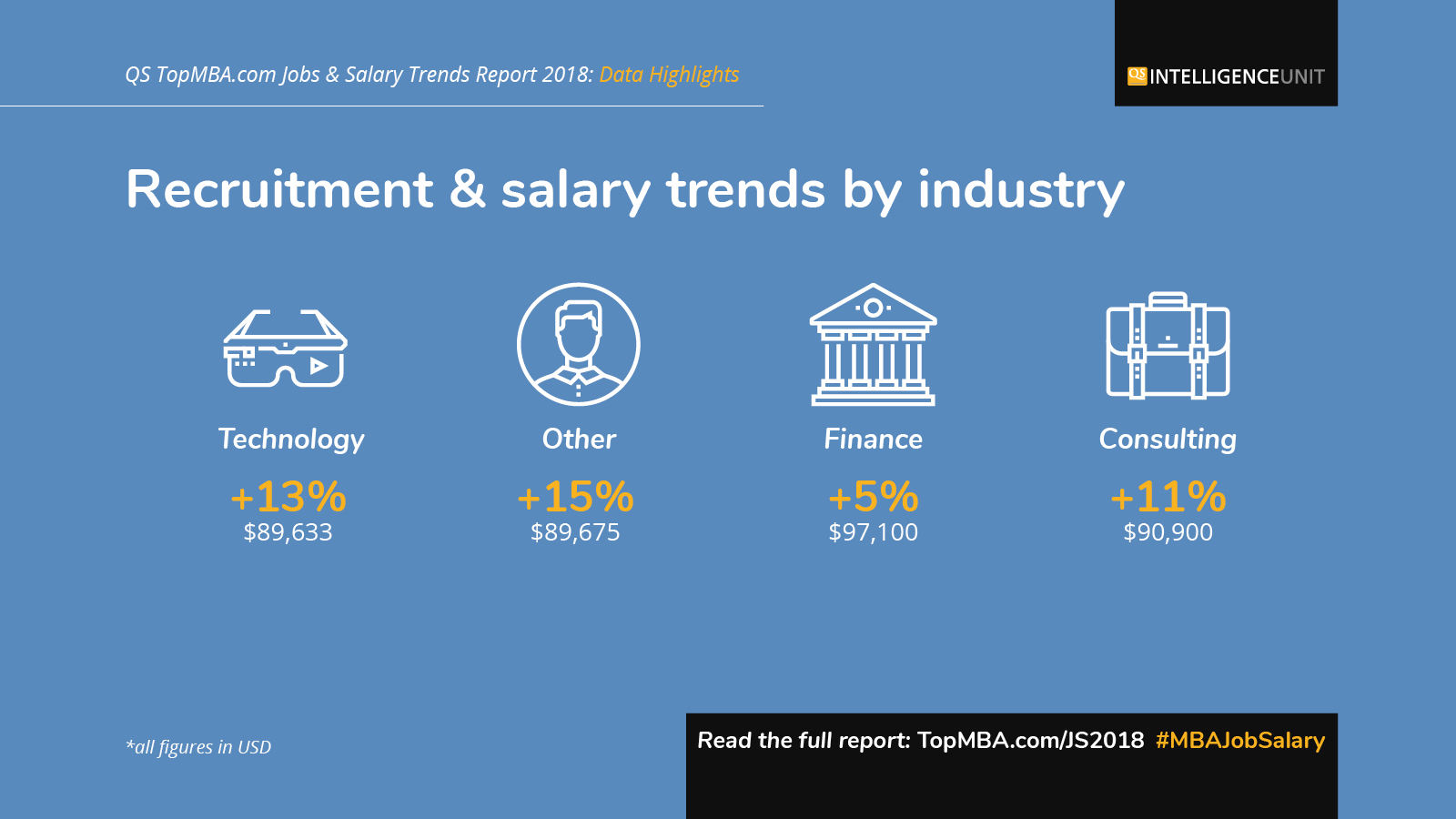 Out of the three big (finance, consulting and technology) industries for MBA hires, it was technology that saw the biggest increase in hiring levels in 2017 (13%). With the tech industry growing apace and the attractiveness of the industry to candidates, perhaps this growth isn’t that surprising. However, employers within the industry aren’t overly confident that this trend will continue in future years, predicting smaller growth in 2018 (5%) and 2019 (2%).

In terms of basic salary, the average in the industry (US$89,633) is pretty much consistent with all other industries (finance being the exception).

Even though we haven’t seen the double-digit growth in hiring across the finance in the way we have with other industries, we are seeing steady growth nonetheless (5%), with a slightly more optimistic (7%) prediction for the next two years.

While hiring growth might not have been as strong in 2017, it won’t come as a shock to many that if you’re looking for the top salaries the finance industry is still the place to go. If you’re looking for a basic salary pushing six figures then the safe bet is finance, averaging of US$97,100. An average basic salary of around US$7,000 higher than comparative industries is not inconsiderable.

Consulting saw impressive hiring growth in 2017 (11%), with expectations for 2018 higher than any other industry (14%). However, after next year’s spike employers expect growth in hiring to slow down considerably (3%) in 2019 – though predictions are somewhat less solid the further into the future we go.

With an average basic salary of US$90,900 the industry is consistent with technology and ‘other’ industries and still provides an attractive option for MBAs.

Talking of the ‘other’ industries, this is one of the key, and most positive, takeaways from the report. As suggested by the name, the ‘other’ industries include pharmaceuticals, manufacturing, industry retail, engineering and everything else that doesn’t fit into the broad categories above. The fact that MBA hiring in these industries has seen substantial growth in 2017 (15%) serves to highlight the increasingly diverse career paths open to MBAs.

The basic salaries available across the ‘other’ category are broadly in line with technology and consulting, suggesting the industries synonymous with the MBA no longer have a monopoly over the hiring of MBAs. With competition for top talent coming from more sources, this could feasibly see salaries increase across the board.

*All salaries are US & Canada and Western Europe only