Post-MBA Career Opportunities and Visas to Remain in the Eurozone | TopMBA.com
Sponsored

Post-MBA Career Opportunities and Visas to Remain in the Eurozone

A natural alternative to the UK for EU jobseekers? A look at post-MBA career opportunities available to those who pursue an MBA in Ireland

As uncertainty on the right to work in the UK has risen, so too have the numbers of jobseekers coming to Ireland's shores. On course to become the fastest-growing economy in Europe for its fourth consecutive year, Ireland is now also, "seen as a natural alternative to the UK by EU jobseekers," says EMEA economist, Mariano Mamertino.

Here’s a look at post-MBA career opportunities available to students thinking of studying an MBA in Ireland, as well as information on the country’s ‘stay-back option’ attached to those in receipt of a student visa.

Studying an MBA in Ireland with Trinity Business School 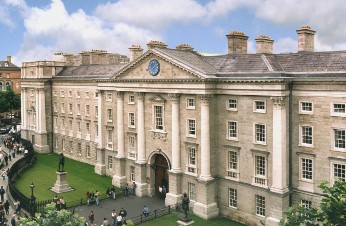 The UK has formally started its two-year exit process from the European Union (EU). This means that Ireland will, in around 24 months' time, be the biggest English-speaking country within the EU, making it an attractive destination for non-EU students. “Coming from India, I was committed to gaining international experience and moving industry from the technology sector to financial services,” says Amrit Chaturvedi, an MBA alumnus of Trinity College Dublin’s Trinity Business School. “The strong network of Trinity's professors, alumni and the MBA career development team helped me to pursue my commitment towards my career, gaining employment in Europe in the financial services sector.”

Ireland is the second-most globalized country in the world, according to the KOF Globalization Index for 2016. The full-time MBA program at Trinity Business School reflects this international stance and covers key subjects related to international finance and global economics in its core curriculum, preparing graduates not only for a post-MBA career with companies in Ireland, but also those based elsewhere in Europe and further afield. An MBA in Ireland has the additional advantage of being cheaper, when compared to many flagship programs available in North America. Firstly, the Trinity MBA runs over the course of 12 months, as opposed to the traditional two-year model in the US. Secondly, an equivalent full-time MBA in the US can cost around US$50,000 per year, over 30% more than the one-year program at Trinity Business School. Add Ireland's ‘stay-back option’ for graduates in possession of an eligible student visa, and the opportunities for a fair return on investment (ROI) look promising.

Non-EU and EEA residents studying an officially recognized MBA in Ireland are now entitled to remain for two years after graduating instead of one, after its Third Level Graduate Scheme was extended earlier this year. This change in legislation gives MBA graduates looking for jobs much more leeway. Once the two years have passed, MBAs may also be eligible to apply for a green card, or to join the country’s work-permit scheme.

Ireland came fourth (and one place ahead of the UK) in Forbes' 2016 ranking of best countries in which to do business, from a total of 139 countries surveyed. Multinational companies are the main catalysts to Ireland's growth, with major players to be found in a number of industries, including the finance, technology and pharmaceutical sectors. Facebook, Google, Microsoft, HP, IBM, Pfizer, Apple and Twitter are examples of some of the big businesses that have made Ireland the hub of their European operations.

Microsoft is, in fact, one of the top recruiters of Trinity Business School's MBA in Ireland, alongside financial consulting firms McKinsey & Company and State Street Corporation. "The job opportunities for MBA graduates are second to none,” says the school's MBA career services manager, Conor Edwards, before adding; “87% of our 2016 cohort were in employment within three months, and as much as half of our students secured job offers outside of Ireland."

Budding entrepreneurs might also be interested in Dublin's status as a leading startup capital. The Irish city is home to approximately 1,500 startups. Trinity College Dublin has invested €70 million towards an innovation and entrepreneurship hub, in conjunction with a new state-of-the-art building dedicated to its business school. The university is also said to have produced more entrepreneurs than any other university in Europe. Between 2010 and 2015, 106 new companies were founded raising US$655 million of capital in the process.