Where are the MBA Jobs? By Industry… | TopMBA.com

Where are the MBA Jobs? By Industry…

In which industries do we find today’s MBA jobs? Within the pages of the QS TopMBA.com MBA Jobs & Salary Trends Report 2015/16 is a detailed account of the worldwide trends taking place when it comes to MBA recruitment.

In going straight to the source of MBA hiring - international recruiters themselves – the report is able to keep track of the industries in which we see growth in the number of MBA jobs available to business school graduates and, of course, those in which we see stagnation or even a decline.

It’s by no means a definitive means of tracing industry rises and falls, based as it is on a self-selecting sample (albeit a large and global one!) of international recruiters that have been actively hiring MBAs over the past year. However, we hope it can serve as a useful illustration of the biggest industry hirers of MBA graduates today - from traditional destinations such as the financial services industry and the consulting industry to those that have begun to assert their prominence only in more recent years, most notably the technology sector – as well as demonstrating how the landscape for MBA jobseekers has been shifting.

To begin with, here are the 10 biggest recruiting industries this year, from their share of the total MBA jobs reported to QS by international recruiters this year.

Top industries for MBA jobs based on QS’s employer survey 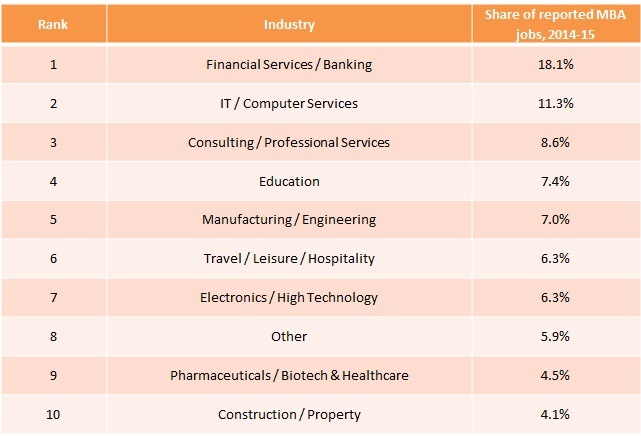 As can be seen in the table above, the traditional suppliers of MBA jobs – the financial services industry and the consulting industry – still feature prominently in today’s market, accounting for more than a quarter of the global share combined. However, technology’s status as a provider of MBA jobs seems firmly established by this point, with 11% and 6% of reported opportunities falling under the industry subsets of IT/computer services and electronics/high technology, respectively.

Some might find it a surprise to see the education sector rank as high as fourth in this list, with over 7% of the global share of reported MBA jobs. However, the sector’s need for managers with the kind of leadership qualities and business expertise that can be gained through an MBA program has been noted by several schools, with Columbia Business School and Indiana University’s Kelley School (through the Woodrow Wilson National Fellowship Foundation) both making provisions for students to specialize in education management in the past year.

In ninth place for share, pharmaceuticals/healthcare stands above construction/property yet behind the volume of opportunities reported by employers in the manufacturing/engineering and travel/leisure/hospitality sectors. However, that may change in the near future as the pharmaceuticals/healthcare industry looks to have undergone a strong year of growth after a couple of underwhelming years of stagnation, something we’ll explore in more detail in our next section.

A headline finding of the new MBA Jobs & Salary Trends Report is the acceleration seen to the global growth rate in MBA job opportunities – from the 8% market growth reported across 2013/14, the rate has now jumped to 14%.

All 10 of the industries posting the highest growth rates this year were in excess of this global average, as can be seen in the table below. When taken together, these industries have undergone an average growth rate of 25% over the past year, up from an equivalent figure of 13% for the year previous. 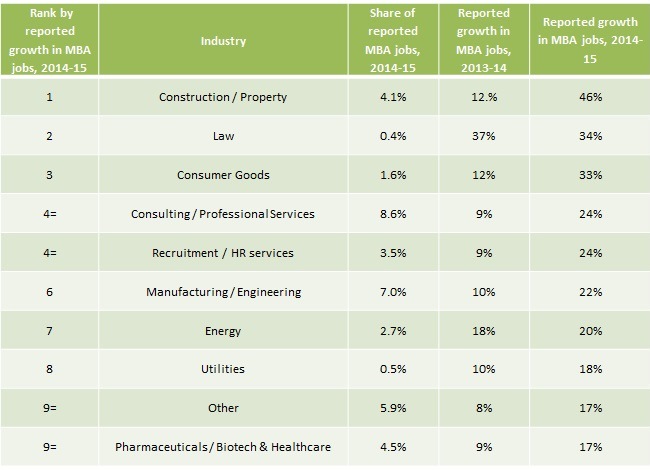 Just missing out this top 10 listing are the two technology subsets, IT/computer services and electronics/high technology, which have both registered a 16% rise in new opportunities this year – again, above the global growth rate average.

By factoring in two further subsets that feature in the report, telecoms and aerospace, we can see that the technology sector’s growth as a whole was fairly mixed around the world – with highs of 40% growth in Eastern Europe and 29% in the US & Canada counterbalanced by a 19% contraction of new opportunities in Latin America and a more moderate 10% rise across Asia-Pacific, producing a global growth figure that is in line with the all-industry average of 14%.

The very highest global growth rates seen this year have come from industries with a smaller share in the MBA job market overall – construction/property, law and consumer goods register a share of around 6% between them. This is perhaps understandable given the greater ease with which one can expand from a smaller platform and is also therefore more likely to be subject to greater year-on-year fluctuation. For example, after construction/property’s bumper year this time round, hiring in the sector over the coming year is expected to return to something closer to the 12% level seen across 2013/14.

Not far behind the year’s fastest-moving industries is the impressive growth reported by international recruiters across the consulting industry the world over – 24% growth is hugely encouraging for anyone looking to use the MBA qualification to make the switch to consultancy – as so many attending the world’s most prestigious institutions do.

This growth has come in spite of the industry registering a flat growth rate among employer respondents in Western Europe. Instead, the positive global picture has come about through rapid growth in the US & Canada (26% growth) as well as in emerging markets within Asia-Pacific (35%) and Latin America (33%).

The consulting industry’s figure looks very much like a show of breaking free from the previous few years’ frustrations, brought on by the effects of the Great Recession – the industry posted a much more tentative 9% growth in new MBA job opportunities last year and the expectation is that a less spectacular figure, of 12%, is in the offing for next year.

Pharmaceuticals/healthcare: Expansion driven by US & Canada

Another sector that has had a good year is that of pharmaceuticals/healthcare, although closer inspection reveals this to be a regional rather than global success story. Indeed, the sector’s 17% growth across the world can be traced in its entirety to a return to form from companies in the US & Canada. In every other region bar Latin America (where growth was marginal at 1%), there was no expansion reported whatsoever, with a 2% contraction felt by the MBA job markets in both Western Europe and Asia-Pacific.

The financial services industry claims this year’s biggest share of reported MBA jobs, yet the industry doesn’t make the top 10 list for growth this time around. However worldwide growth of 9% is a pretty good return when you consider the persistent economic difficulties and/or instability felt across many of the world’s influential markets. Indeed, the financial services industry in Western Europe and Eastern Europe grew by just 3% and 2%, respectively, bringing the global picture down in spite of the impressive increases witnessed in Asia-Pacific (15%), the US & Canada (17%) and Latin America (18%). 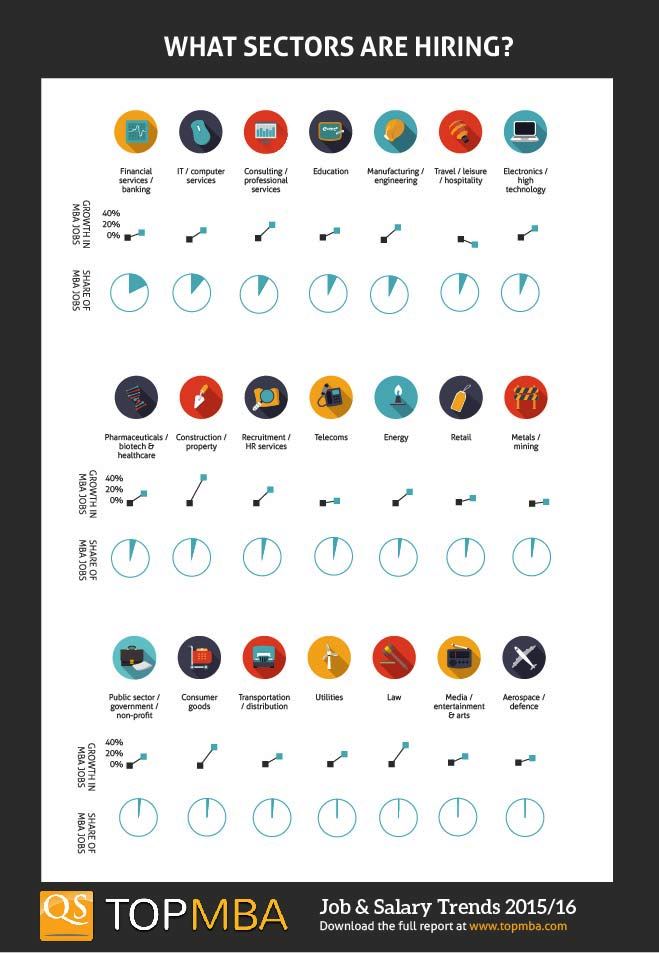 This article was originally published in October 2015 .