The question of how we might achieve gender equality in business is a crucial one, and it is at the senior leadership and c-suite levels that alarmingly low proportions of women persist.

To address this gap, many look to business schools and the MBA – a qualification designed to prepare emerging leaders to advance their careers. It stands to reason that achieving gender equality in the MBA cohorts of leading business schools can help set the tone for breaking down further barriers when students graduate and make their way in the business world. For this reason, a good amount of attention is paid to the proportion of female students business schools enroll each year.

The table below shows the proportions of female students enrolled in the MBA class of 2018 across a selection of 20 top business schools in the US. 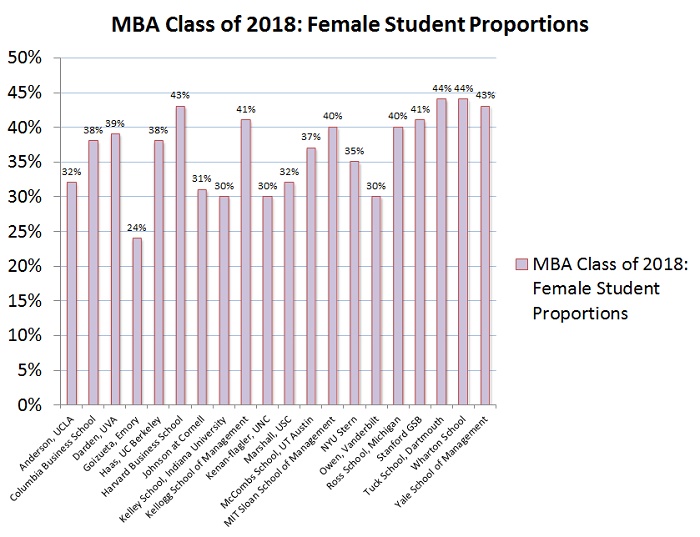 The average proportion of female students to be found across the 20 cohorts above is 37%. Eight schools have reported MBA class proportions that are 40% or higher, yet none are higher than the 44% proportions seen at Wharton and the Tuck School of Business this year. Seven schools, meanwhile, report MBA class of 2018 cohorts in which female students number less than one third. On the whole, these latest class figures are largely consistent with those seen among the MBA class of 2017 and this means that, as a group, leading business schools in the US seem to be no closer to achieving gender equality in their flagship MBA programs.

“The data suggest that the number of women applying to full-time MBA programs has hit a plateau,” reads a line from a new GMAC white paper, entitled What Women Want: A Blueprint for Change in Business Education. The paper finds that 36% of MBAs graduating around the world in the academic year 2015/16 were female. In addition, the global proportion of female applicants to full-time, one-year MBA programs in 2016 came out as 36%. Female applicants to two-year MBA programs last year represented 37% of the total - the very same as the average proportion enrolled across the 20 US schools above. However, perhaps the most perturbing finding here is that GMAC finds no real difference between 2016's application proportions and those of the previous four years.

In contrast to the lack of progress seen among female MBA application and graduation rates, gender equality can be found in non-MBA business master’s degrees. Citing data from the AACSB, GMAC reports that, across 2015/16, 51% of graduates of these management degrees worldwide were female. The paper also points to a survey sample of 10,000 prospective students among which greater proportions of women were found to consider and prefer non-MBA master’s programs (as well as part-time, online, and flexible MBA formats to a slightly lesser extent) when compared to men.

“Women have made phenomenal progress in attaining business master’s degrees, yet they have not yet caught up with men in the share of MBAs earned,” said Sangeet Chowfla, president and CEO of GMAC. The new white paper investigates a number of underlying reasons for this, “lack of parity,” as Chowfla terms it, before concluding that MBA programs still need to present an effective value proposition for women if they are to address their continuing lack of gender equality.

MBA Loans in the US

Business School Admissions: How Will Covid-19 Affect My Application?