The QS Global 250 Business Schools Report 2017 is based upon the findings of two global surveys – a survey of international employers who hire MBA graduates and a survey of academics with expertise in the fields of business and management. The results of these surveys are then used to inform a business school’s placement across the QS Magic MBA Quadrants for Employability and Research Excellence.

Employer survey: Since 1990, the QS Intelligence Unit, in collaboration with TopMBA.com, has conducted an annual survey of MBA employers worldwide to determine trends in international salaries and recruitment. The survey is targeted at those with responsibility for MBA recruiting in their respective companies.

For the purposes of the QS Global 250 Business Schools Report, the survey seeks to capture the preferred set of business schools from which recruiters wish to recruit MBAs; either now, in the recent past or in the near future.

Employer index: Each employer is asked to list, unprompted, the international schools from which they have recently attempted to recruit MBAs. Each time a school is selected by an employer, it receives one vote and the total number of votes for each school is referred to as the ‘total unprompted votes.’

From a list of 500 business schools that have been categorized by region, employers are then asked to identify the schools they regard as attractive for the purpose of hiring MBA graduates. In order to be included on the list, a school must have been recommended by an employer in the previous year of the research. Each time a school is selected, it is given one vote, and the total for each school is referred to as the ‘total prompted votes.’

Employer survey sample: Employer respondents to the survey span every major industry and region of the world, as the charts below demonstrate. 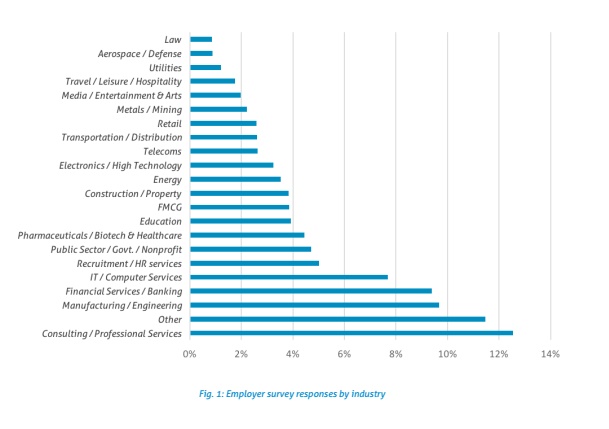 Consulting/professional services, financial services/banking and IT/computer services are the industries which currently hold the three largest shares of the MBA employment market, on the basis of the QS TopMBA.com Jobs & Salary Trends Report 2016/17, and each of these are well represented in the sample. 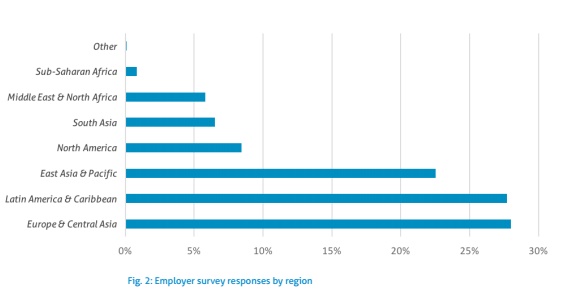 The employer sample is spread across all the major MBA employment markets. The US and India, the number one and two employment markets in the world for the size of their demand for MBAs, respectively, represent 14% of employer respondents. Europe & Central Asia – home to a number of influential recruitment markets, such as the UK, Germany and Russia – represent 28% of respondents. Latin America & the Caribbean represents 27% of the sample, with Brazil, Mexico and Peru producing the largest responses in the region. East Asia & Pacific is home to three members of the world’s 10 biggest markets for MBAs (Singapore, South Korea and China, respectively) and makes up 22% of the sample.

Academic reputation survey: Independent to the employer survey, the QS Intelligence Unit surveys academics from all over the world each year, a survey that forms the centerpiece of the QS World University Rankings. The latest survey draws from the responses of 76,798 academics worldwide.

Respondents are first asked to identify their areas of expertise – countries, regions, and up to five faculty areas with which they are most familiar. For each of the five faculty areas, they are then asked to list up to 10 domestic and 30 international institutions that they consider excellent for research in that area. They are not permitted to choose their own institutions. For the QS Global 250 Business Schools Report, only responses related to business and management are used.

QS combines responses from the last five years and, where any respondent has responded more than once in the five-year period, their previous responses are discarded in favor of the latest numbers. Responses from 2011 and 2012 are then given a weight of 25% and 50%, respectively, while the remaining years each carry a full 100% weighting.

For the purposes of this report, QS used 8,376 responses from academics with expertise in the fields of business and management taken between the years of 2011 and 2015. Academic survey responses are coupled with an analysis of faculty citations per paper (as opposed to citations per faculty member) and the h-index (Hirsch index) measurement of publication productivity and impact. Citations data is data derived from Scopus and spans a five-year period, with a weighting applied to the citations indicator in order to best reflect prevalent publication and citation patterns. Schools publishing fewer than 30 papers are penalized by 25% to avoid disparities in the results.

Academic survey sample: Academic survey respondents are, like those who contributed to the employer survey, spread across the globe. Europe provided the greatest density of responses, ahead of East Asia & Pacific and North America, as the chart below shows. Regional weightings are applied to balance response rates.

This article was originally published in January 2017 .