What I Learned at the European Parliament, Thanks to ESCP Business School MiM Students | TopMBA.com

What I Learned at the European Parliament, Thanks to ESCP Business School MiM Students

Without a fair democratic system, the world as we know it would fall into a state of anarchy. We need democracy to ensure society functions to benefit all.

One such political body is the European Parliament – an important forum for political debate and decision-making at EU level.

Members of the European Parliament are directly elected by voters in all member states to represent peoples’ interests, make EU laws and ensure other EU institutions are working democratically.

Although MEP’s are elected by voters, parliamentary powers can often feel completely separate from regular people. This is why a very special seminar offered by ESCP Business School to its Master’s in Management (MiM) students is so intriguing - as it allows students to try their hand at parliamentary law-making.

Where the magic happens

On February 26 and 27, 1,000 ESCP Business School MiM students – from all their European campuses – travelled to the European Parliament in Brussels for the 11th edition of ESCP’s Designing Europe seminar.

During the two-day seminar, students took on different roles held within the European Parliament and participated in a mock legislative process to discuss the EU Green Deal.

A man in the know

The seminar is an impressive event to behold, and unlike your typical on-campus learning environment.

Many of us would never normally see the inside of the European Parliament – whereas during the first few hours of the Designing Europe event, thousands of students were in the Hemicycle listening to Michel Barnier’s (the European Commission's Head of Task Force for Relations with the United Kingdom since November 2019) keynote speech. 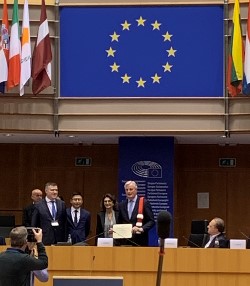 An alumnus of ESCP, Barnier was able to tell the students about his first-hand experience in the political sector, where the management skills he acquired have undoubtedly helped him in his career. He said: “When I graduated from ESCP in 1972, the UK was preparing to join the European Union.

“I'm sure that my years as a student on Avenue de la République [where ESCP is based] helped to strengthen my commitment to Europe.

“And in 1972, that commitment led me to campaign for the UK to join the European Union.”

Following in the footsteps of their predecessor, ESCP’s MiM students were able to experience a snippet of what being in the European parliament would entail through a couple of days of very realistic role-play.

Whether they were acting as MEPs, members of the Commission, or the Council, students were able to get to grips on the European institutions while working on the European Green Pact – a topical issue affecting the European parliamentary agenda today.

Even with a decent understanding of politics, observing the running of European Parliament firsthand was an eyeopener. Watching the Master’s in Management students in action, and seeing how they handled the role-play so seamlessly (and with conviction might I add), demonstrated just how effective the seminar was.

The debates in their individual groups discussing the EU Green Deal - with students allocated to represent different political parties - were well thought-out, and their speeches in the Hemicycle to their peers, professionals in the field and other spectators were concise and educated.

But one of the most impressive realizations of the event was that ESCP’s MiM students were the first people of the new parliament (following the redistribution of power following Brexit) to discuss the EU Green Deal.

A fight for all

Over the years, the European Parliament has acquired substantial legislative and budgetary powers that allows it to set - together with government representatives of the Member States in the Council - the direction in which the European project is heading.

The Parliament also seeks to promote democracy and human rights not only in Europe, but also throughout the world, demonstrating that all global citizens are worth fighting for.

Leon Laulusa, Dean for Academic Affairs at ESCP Europe said: “What you are dealing with today is essential for humanity.

“This event represents ESCP’s DNA, focusing on humanistic and diversity values. I say ‘yes’ we can change the world from listening to all of you. Let’s keep our planet great forever.”

This article was originally published in March 2020 .