Harvard Business School graduates earn an average of US$3.6m over a 20 year, post-graduation time period, according to a new MBA salary survey.

MBA Salaries for Graduates of Top US Business Schools

Other business school alumni that attended top ranked MBA programs in the US enjoyed similar accumulated salaries over the past 20 years. MBA alumni from the Wharton School, Stanford University, Columbia Business School, Tuck School of Business, MIT: Sloan, and Kellogg School of Management all witnessed average salaries of above US$3m, combined over a 20 year period.

Other US MBA Salary Data

On average, MBA alumni from the 57 US business schools in Businessweek's 2010 MBA ranking saw salaries totaling US$2.4m over the course of a 20 year career. This equates to a US$120,000 annual MBA salary, though it should be noted that alumni tend to earn higher annual salaries as their careers mature, so fresh graduates should expect less initially.

The rising pay scale of MBA alumni is portrayed in the results shown for the top 10 business schools in Businessweek's salary ranking. After a 10 year career, average MBA salaries at the top 10 schools were found to be US$132,000 per annum. After a 20 year career, this figure increases to US$190,800 per annum.

Unsurprisingly, the MBA salary difference between top ranked US business schools, and those that are usually found lower down the list on MBA rankings was significant.

As reported by Businessweek, while the MBA salaries of the alumni from the top 10 business schools averaged out at over US$3m each during the 20 year period,  alumni from the remaining 47 schools in the US publication's ranking reported average salaries of under US$2.3m. 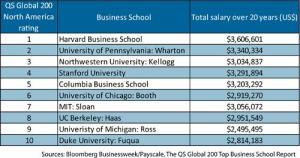 Conducted for Bloomberg Businessweek, the MBA salary data was collected by Payscale through information submitted by individuals on various online wage comparison tools. While base salaries and bonuses were included, stock and options, which are often offered to high level executives as part of their remuneration packages, were excluded.

This article was originally published in November 2012 . It was last updated in April 2021