How a football tournament brought business school students together | TopMBA.com

A love for sport, desire to network, and building a community both on and off the pitch are just a few of the reasons why London Business School's inter-MBA football tournament was a success.

There’s a reason why football is called ‘the beautiful game’ here in the UK, as the sport has the capacity to bring communities together while cheering for a shared outcome.

It won’t come as a shock to many that sport teams play an important role on MBA programmes – giving participants an activity to bond, problem-solve, make connections, and have a little bit of fun in the process too.

TopMBA spoke with Jorge Fernandez and Andres Camacho Mendoza, AMBS MBA candidates Class of 2022 to learn more about the tournament, how they chose their football team, and why sport is a great way to network on an MBA programme.

The idea behind the tournament

LBS’s initiative offered an alternative to this year’s virtual MBAT event. Labelled the “UK Super League”, this was an exclusive football tournament for the UK’s top MBA students.

The two-day event welcomed two groups of four teams to battle through the playoff phase on the Saturday, with the semi-finals and finals held on the Sunday.

Why the tournament was a success

Jorge and Andres acknowledge an MBA is about so much more than academic – a huge part of the programme is of course networking and travelling, but COVID-19 minimised the possibility to do this in any largescale capacity.

Andres said: “Football was the perfect excuse to have a different experience besides lectures and study time. It was our way to network, bundle and connect as a cohort, especially during the COVID-19 restrictions that limited our options for social events.” 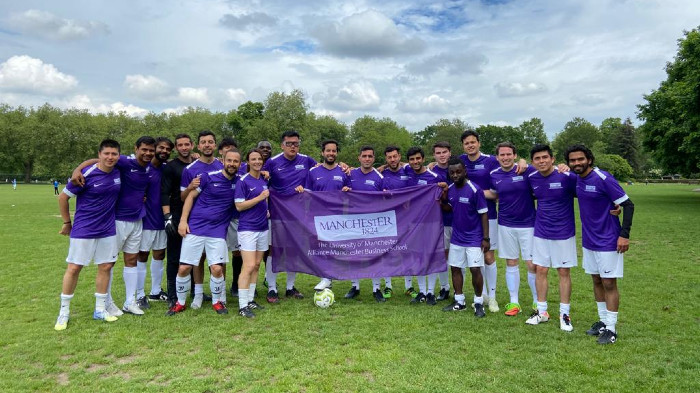 Andres and Jorge said: “As organisers for AMBS, we are delighted to have prepared this for the team, we know it is something no one will ever forget.”

Eight teams were present over the weekend and were split into four teams per cup – with AMBS, London Business School, Judge, Said, Cass and Imperial battling it out on the pitches in Battersea Park.

AMBS reigned supreme, bringing home the silver trophy – to which Andres and Jorge said the tournament couldn’t have been better.

Although successful at LBS’s tournament, the duo admit the team will go beyond this event. Andres and Jorge already have some ideas for next semester including a seven-a-side and 11-a-side football tournament for men and women in Manchester.

But that’s not all. AMBS’s football team are also looking to undertake some friendly games across the UK, with plans to take the squad across Europe for some more friendly matches at other business schools including in Spain, France, and Italy.

Sport offers a unique way to connect with peers, to have fun, build strong friendships and network, according to the duo.

Andres said: “It’s also a way to balance your academic life in a very demanding programme under a very challenging context.

“Besides, it is good for mental health, to remain active, share values (for example respect, collaboration, discipline, resilience and leadership), teamwork and travel.”

Jorge and Andres say the Battersea Park location allowed proper networking to take place, where students were able to meet in two different situations: competing on the pitch, where things were sometimes intense and physical; outside the pitch where everything was funny and relaxed where participants and observers could talk, take pictures and share snacks and drinks.

They said: “Unfortunately, due to COVID-19 restrictions, other types of social events in different venues were restricted. We are sure that will be sorted next year if they decide to organise it again.

“All in all, it was a great experience, and we had the opportunity to improve our AMBS relationships and team-building skills.” 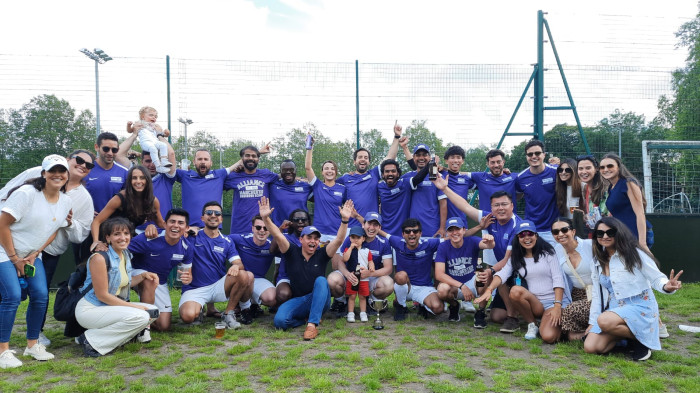 Discover the business school for you at one of our events