Which Schools Get to Know Their Applicants Best During MBA Admissions? | TopMBA.com

Which Schools Get to Know Their Applicants Best During MBA Admissions?

Business schools are often keen to get to know prospective students during the application process. Indeed, this ideal has been a recurring theme in TopMBA.com’s series of MBA admissions interviews with institutions around the world. But, which schools are doing the best job in this respect?

In the US, that school is Dartmouth Tuck and, in Europe, Spain’s IE Business School leads the way, according to a new applicant survey carried out by the Association of Independent Graduate Admissions Consultants (AIGAC).

These two schools received the highest scores when applicants were asked how well schools got to know them during the MBA admissions process. Respondents here numbered a little over 1,000 and are all said to have cited their intention to enroll in a program before January 2017. AIGAC’s full top 10 is shown below: 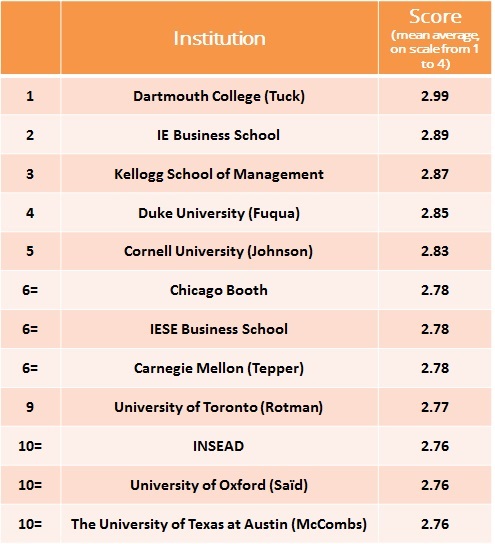 To whom do prospective MBA students turn for help?

The people to whom these prospective MBA students turned for support with their application also make for an interesting finding in AIGAC’s survey. Namely, that a significant 17% of the sample sought no help from others throughout the application process. Roughly three-quarters, however, said they turned to either a friend or family member, while 39% indicated that they had used an MBA admissions consultant, down from 46% last year. Approximately half of applicants said they had sought advice either from an alumnus of the school to which they were applying or a coworker.

Tests topple interviews as most challenging part of application process

It seems that the reasons prospective MBA students look to others for support in the application process are still quite likely to center around its written components. In the sample of around 1,000 applicants, 61% declared standardized tests (be it a GMAT, GRE or TOEFL test) to be a challenging aspect of the application process, ahead of the 46% who pointed to a school’s required essay questions (respondents could select more than one option). Interviews and letters of recommendation proved much less of a concern and were cited by 20 and 18%, respectively.

Video essay questions, a growing currency among MBA admissions techniques, were completed by 35% of this respondent pool. They were also earmarked as challenging by around a third of respondents in each of three separate analyses of AIGAC’s responses from those who had applied to an individual school which asks for video responses (Kellogg, Yale SOM and UT Austin McCombs). Among all prospective MBA students who submitted a video essay, 49% said they felt it had represented them ‘well’ or ‘extremely well’, although results indicated that male applicants were slightly more comfortable with this format than their female counterparts.

Survey respondents who plan to enroll before the start of next year represented around a third of the total number of people who completed AIGAC’s survey between February and May 2016. Female applicants represent 35% of this total and 44% of all respondents are based in the US, with the remainder said to spread across 83 different countries. One in five indicated that they were already in possession of a master’s degree.

On the whole, a number of the survey’s findings chime with those of the QS Applicant Survey 2015. The consideration given to affordability, for example, and the effects this might have on prospective MBA students’ choice of program format.

A total of 55% of respondents to QS’s 2015 report indicated that the availability of scholarships and financial aid informed their choice of study destination, while 30% of AIGAC respondents said that program costs and scholarship availability were an influence on their choice of school. However, in both cases these concerns are superseded by others – namely, the international recognition of qualifications from MBA providers in a study destination and the reputation of individual institutions.

This article was originally published in June 2016 . It was last updated in July 2019

Why US MBA candidates are choosing to study online