Advantage Amsterdam: A Full-Time MBA on the Move | TopMBA.com
Sponsored

Advantage Amsterdam: A Full-Time MBA on the Move

Starting from this September, full-time MBA students at Nyenrode will study at a canal-side location in the heart of Amsterdam
Register to attend Nyenrode’s International Business Game June 1-3, 2017

This article is sponsored by Nyenrode Business University. Learn more about its Full-Time MBA

Amsterdam is the capital of the Netherlands and is world-renowned for being one of Europe’s leading cultural destinations. However, what might be less known is that while the Dutch government is based at The Hague (Den Haag), Amsterdam is also the Netherlands’ financial capital and a hub for international business.

Home to the Amsterdam Stock Exchange, the city’s mayoral office has already been in touch with UK-based finance firms that are considering their post-Brexit options. Amsterdam also plans to bid to become the new home of the EU’s stress-testing regulatory body currently based in London, the European Banking Authority (EBA).

Part of Amsterdam’s attraction lies in its location, which is within easy reach of Europe’s key cities, and the excellent standards of English found among its inhabitants, particularly in the spheres of business.

The city’s not just about finance, however – it was also awarded the title of European Capital of Innovation 2016 by the European Commission for its, “holistic vision of innovation related to four areas of urban life: Governance, economics, social inclusion, and quality of life.” 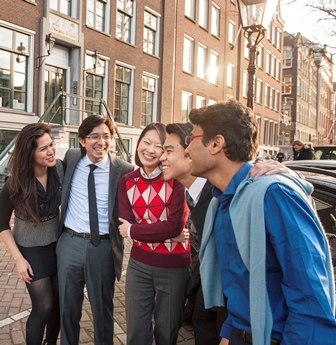 It’s for reasons of greater immersion in all that Amsterdam’s business landscape has to offer that Nyenrode Business University has taken the decision to shift the location of its full-time MBA program from the university’s castle estate in Breukelen. Starting this September, students will now study in Amsterdam’s city center.

As picturesque as the grounds at Breukelen (a town located between Amsterdam and Utrecht to the capital’s southeast) are, Dennis Vink, director of the Full-Time MBA program at Nyenrode, is suitably pleased by the decision: “Our strong connection with the business world plays a big role in providing employment possibilities to our students. Living and studying in Amsterdam will bring our students even closer to such opportunities.” Some of those opportunities might include positions at the financial/professional services firms, ING and TMF and the tech company, Philips, all of which are headquartered in Amsterdam and listed among Nyenrode’s top employers of MBA graduates.

If you’re from outside the European Union (EU) and looking to study in Amsterdam, you might find that the Netherlands’ visa situation is also to your advantage: For students keen to stay on and work in the Netherlands after completing the program, post-study visas give a year in which to find a suitable position, post-graduation. Most, however, will not need the full year. Vink says that 82% of the Full-Time MBA program’s recent graduates secure positions within the first three months of the program's conclusion – the MBA’s move to the heart of Amsterdam seems unlikely to cause that statistic to drop.

There are 16 nationalities represented in the current class of just 38 students, of which only 3% are citizens of the Netherlands. Indeed, figures taken from the school’s last five intakes highlight the scale of diversity at Nyenrode. Around three-quarters of its students come from outside Europe altogether, yet around 40% will work in the Netherlands post-graduation and a further 10% tend to take jobs elsewhere within Europe.

Helping students to understand and connect with career opportunities in the Netherlands has always been central to Nyenrode’s full-time MBA program and enabling students to study in Amsterdam should only serve to facilitate this further.

However, there’s also been a notable emphasis on developing a broader knowledge of Europe as a whole, since the launch of its European Immersion Modules last year. This series sees students travel throughout the European Economic Area (EEA) – Paris, Copenhagen, Dublin, Brussels and Milan – visiting and meeting representatives from companies such as Nestlé in Copenhagen, and Bank of France in Paris.

“Company visits connect our students with business executives of top-tier companies and institutions, providing a great opportunity for them to expand their network, learn about the latest developments in international business, and enable them to explore employment possibilities," explains Vink.

With so many trips taking place in a reasonably short space of time – Nyenrode’s program is a one-year affair – it’s just as well that Amsterdam is renowned for the quality, and rapid accessibility, of its main airport. The area around the airport even plays host to the offices of another big-name company; Microsoft.

Where exactly will your study in Amsterdam be based if you opt for the Nyenrode MBA? Alongside one of the canals for which Amsterdam is perhaps most famous of course!

The building complex known as the De Vijf Keijzers on the iconic Emperor’s Canal (Keizersgracht) is the precise location in which the class enrolling this coming September will find themselves. Nearby cultural landmarks, for those keen to get their bearings, include the 17th-century Royal Palace of Amsterdam, Amsterdam Museum (which maps the city’s rich history from the middle ages to the present day) and Anne Frank’s House, where the diarist and her family famously hid to avoid persecution for two years during WWII.

A changing location for the MBA is just the start for Nyenrode, which plans to offer more of its postgraduate business education offerings from the capital of the Netherlands in the near future. As Miša Džoljić, the university’s rector and an MBA graduate himself, says; “we're bringing the Full-Time MBA to Amsterdam as a first step.”

This article is sponsored by Nyenrode Business University

This article was originally published in April 2017 . It was last updated in March 2019