Professional networking opportunities are often cited as an important part of what you stand to gain by attending one of the world’s leading business schools. The chance not only to get to know fellow classmates of high potential but also to gain access to an extensive and global alumni network consistently lies among the main motivations for MBA study, according to QS’s annual survey of MBA applicants.

But, is it possible to go one step further than a business school’s alumni network? The organizers of an annual event known as the MBA World Summit believe it is and are currently in the middle of visiting 30 business schools around the world to explain why.

The summit, launched in 2014, is built around the concept of bringing together some of the world’s leading MBA students under one roof. There, participants get a chance to discuss the latest hot business topics and trends over the course of three or four days, exchanging ideas with those from cultures far removed from their own in the process. Attendees at these events, which have taken place in Hong Kong and Barcelona so far, with a date set for Miami in 2016, are then invited to join an additional alumni network, known as the Global Leadership Community, (GLC).

“I think an alumni network, from a business school for example, is something you can always reach out to if you have any questions about a job opportunity or a certain career path, but these people in the GLC, they also have a strong personal interest in each other,” says Yannick Reiss, cofounder of the MBA World Summit. He believes there can be more to professional networking than simply extracting what’s useful to you and your immediate future, stressing the value in being able “to have fun networking and not see it as just a tool.” 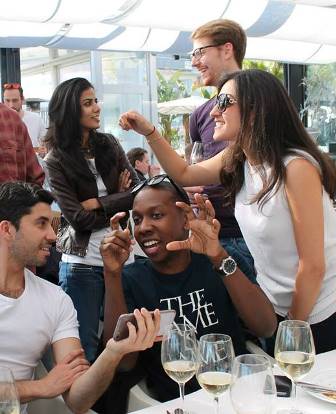 Going beyond a simple exchange of notes and injecting a bit of fun into a professional networking event is a central premise of the annual summit, as Reiss explains:

“What’s important is not only the content exchange but also the social exchange. We have one full day where, for example, we do cultural expeditions. This is the day where all the personal relationships and stories are made and this is the reason why people stay in touch after attending the MBA World Summit.”

To aid the atmosphere in this respect, the summit runs a selection process akin to an MBA admissions process and limits annual attendance to approximately 100 MBA students: “It shouldn’t be too anonymous,” Reiss reasons. Certainly, this line of thinking is supported by business schools with smaller MBA class sizes, where the virtues of joining a close-knit community conducive to forming stronger bonds and, therefore, longer-lasting relationships are often accentuated.

A key facet of the summit’s selection process is an asynchronous video interview that the organizers use to get an indication of an applicant’s personality – as is the case among a handful of business schools that also use videos as a portion of their MBA application. The principal idea behind it is to enable decision makers to select candidates they feel will represent a good fit for the program or, in this case, event.

“At the end of the day, we have a match of really like-minded MBAs that are not only excellent in their practical experience and in terms of their academic background, but also people that want to change something in life – that really want to have impact.”

Networking to promote the value of the summit’s own network

The current whistlestop tour of 30 business schools is being made in preparation for the upcoming summit in Miami, and has allowed Reiss and his team to meet with schools’ career centers as well as current students and club presidents.

Having kicked off the tour with a couple of dates in Europe, the team has been in the US this week meeting with Dartmouth Tuck, Chicago Booth and Stanford GSB, among others, while tomorrow sees them journey on to Seoul, home to the SNU Graduate School of Business, with visits set for next week at the likes of CUHK and NUS Business School. In the course of his travels thus far, Reiss says he’s been overwhelmed by how receptive both staff and students have been to the summit’s concept, network and goals. “There’s nothing greater to see than that other people also like the idea and the value behind it.” 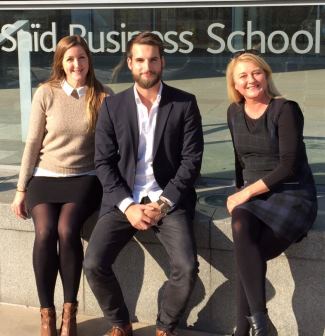 Regarding the choice of schools they are visiting, Reiss stresses that the summit is keen to look further afield than the big-name schools alone: “It’s important to show the world that not only the top schools in the US are the ones with the brightest future.” At the same time, however, he says they have been naturally drawn to schools from which MBA students have created strong impressions in the MBA World Summit’s first two installments.  “From our own experience, many of the most inspiring students really do come from these top MBA programs, so we always have a great number of participants from London Business School, for example, from Stanford and from Harvard.”

Due to the scale of ambition Reiss has for the summit and GLC – long-term, he wants it to develop into a forum for ideas and projects that attracts the attention of key influencers in the economy, politics and media – attracting the very best MBA students is clearly the clinching factor.

With this in mind, the event draws on the existing connections and experience of its organizing company, QX–Quarterly Crossing – a membership network for career and leadership development that has a particular focus on talent management. QX, which has its origins in an institute that sought to help students find internships overseas, provides the mechanism that allows Reiss and his colleagues to whittle down applications to the summit. It also allows them to offer those selected the option of talking to recruiters, in the shape of partner companies, while they’re in attendance.

“We sit down with these companies beforehand and figure out what they can offer these particular kinds of MBA profiles,” Reiss says. One motive behind the corporate participation is to offer MBAs a potential fast track to a job offer on graduation. In this, there’s an awareness that – for all the appeal of professional networking simply for networking’s sake – MBAs are, more often than not, seeking new employment opportunities. For Reiss, the job-seeking process could do with a bit of speeding up in a number of cases, even among the high potential ranks of MBA students:

“Usually you have the struggle of applying for a job, you get an answer and then the job representative tells you you’ve made it into the first round. In three weeks, you get further feedback. Three weeks later, you have to do the second interview and then they tell you ‘OK in two weeks you’ll get the final decision’ and that’s something a lot of MBA students struggle with because they do their MBA not only to expand their network, but also because they want a job change and, for them, it can go faster.”

Even so, the event is first and foremost about giving its participants a platform on which they can discuss thoughts and ideas that are important to them. Indeed, part of the application asks students if there’s a particular topic they’d like to see included at the summit.

“We’ve always had a good rate of about 85% of all applicants who also hand in a topic they want to talk about at the event,” says Reiss, adding that these ideas will ultimately inform the event’s schedule with any common themes in submitted topics used as a basis for lengthier panel discussions. The topics also provide a way in which MBA students can stand out from the number of applications the summit receives – which has been increasing steadily since 2014:

“We started really small in Hong Kong where we had the great luck of having 2,500 applications, we then increased this number to 3,000 for Barcelona and I really hope for an explosion in terms of maybe even receiving 5,000 applications this year for the event in Miami.”

That means the acceptance rate, based on 100 participants selected, for this year’s summit was somewhere in the region of just 3% - lower odds than even the most selective of MBA programs around the world. (By way of example, Stanford attracted almost 8,000 MBA applications this year of which a little over 5% (407 students) were ultimately enrolled in its MBA class of 2017). In spite of this, Reiss is adamant that what might generally be considered a ‘perfect’ profile isn’t necessary to secure an invitation, arguing that someone who can offer a deeply thought-provoking topic or a “unique approach” to their professional life is just as likely to be considered:

“It does not have to be an 100% perfect application where you must come from one of the best MBA schools and where you have to have been with one of the best companies beforehand, it also can be something in your CV and application that creates interest.” The summit’s 2016 edition in Miami takes place in the second week of March.

This article was originally published in November 2015 . It was last updated in July 2019