Which US Schools Have the Most LGBT Students? | TopMBA.com

Which US Schools Have the Most LGBT Students?

How many LGBT MBAs are there? Which business school has the most LGBT MBAs? Many current LGBT students and media outlets have posted this question to Reaching Out MBA, an organization which has recently published data on the percentages of LGBT students at 33 US business Schools.

Calculating the number of LGBT MBA students is an inexact science, however, since these questions are nearly impossible to answer accurately. Why? For one thing, the answers depend on student disclosure, and according to Reaching Out MBA, only 20% of MBA students are out during their time at business school.

“This data is not scientific,” Reaching Out MBA warns, “nor does not give a full picture of any specific schools’ LGBT inclusiveness.” Instead, the survey is designed to track inclusiveness over time.

So, what is the percentage of LGBT students in top MBA programs? According to the data from Reaching Out MBA, 2.94% of MBA students self-identify as LGBTQ, a percentage that it slightly higher than last year’s (2.7%). This percentage is about the same as that for the overall US population. According to a 2013 CDC survey, 2.3% of Americans identified themselves as LGBT.

Isenberg has highest percentage of LGBT MBAs, but HBS has the most

So, which business school has the highest percentage of LGBT students? That would be UMass Amherst’s Isenberg School of Business at 6.67%. It should be noted though that Isenberg’s number of LGBT students is among the smallest at five. The school with the highest number of LGBT MBA students is Harvard Business School at 80. The largest LGBT club, with 630 students, can be found at the Wharton School.

On the other end of the spectrum, the school with the fewest LGBT MBA students is Texas’ Rice University, where less than one percent of students (0.45% to be exact) self-identify as LGBTQ.

How did other schools fare? The table below has the schools with the highest percentage of LGBT MBAs. For more data, visit the Reaching Out MBA website. 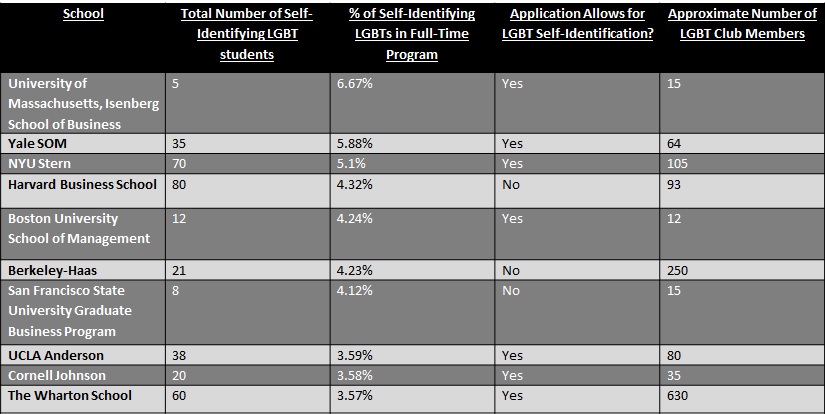 This article was originally published in November 2014 . It was last updated in July 2019

My Imperial MBA: Back to school after 20 years’ of industry experience

My First Semester as an MBA at Imperial College Business School