Where in Europe do MBA graduates tend to attract salaries that are more than double what they were earning prior to enrolling?
Learn more about the ROI for an MBA in Europe

As a general rule, the highest MBA salary levels offered to newly graduating students tend to be found among those placing highest in QS’s regional MBA rankings. These rankings are based on the opinions of employers, and clearly, they are willing to pay a premium for the services of an MBA who has studied at a top school.

In Europe, eight schools reported MBA salary averages that were in excess of US$100k in 2014. These included the region’s leading luminaries, London Business School and INSEAD, both of whom placed just behind the Swiss duo of IMD and St. Gallen – where the Swiss franc’s strength and the country’s robust economy were largely behind Switzerland reporting the highest salary levels on offer to MBA graduates in 2014.

However, a graduate’s hike in salary in percentage terms – how a post-MBA salary compares to what graduates were earning prior to enrolling – is a different matter, and one that hints at the prospects of an MBA program’s immediate ROI.

From a new MBA ROI survey of 46 business schools in Europe, students of 12 institutions were able to double their money or more after completing their MBA program. The average hike in salary seen, meanwhile, was 85% - which translates to a numeric increase of US$45,500.

Across different countries within Europe, the average rise in salaries seen pre to post-MBA ranged from 78% in the UK and Netherlands, to 105% in Germany and as much as 118% in Switzerland. However, these amounts also varied between institutions – the business schools where MBA graduates earned the 10 highest salary hikes are therefore detailed below: 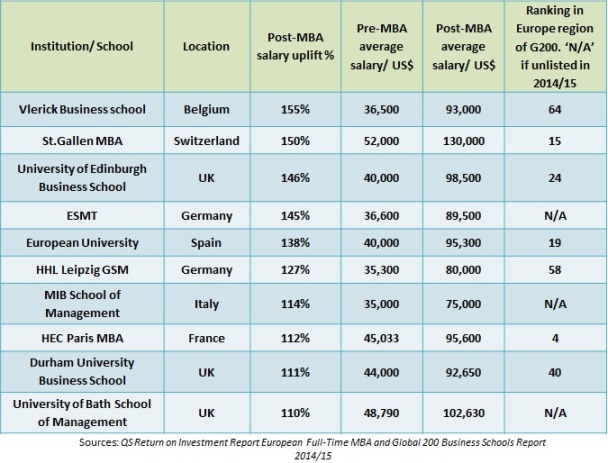 From the table above, you can see that getting your MBA ROI off to the perfect start with a boost of more than 100% in salary is not the limited to schools in a few countries - business schools based in seven different nations feature in this top 10.

But, as you can also see from the table – just three of these schools are counted among the top 20 business schools in QS’s latest regional MBA rankings.

These annual rankings are formulated on the opinions of international recruiters and business academics worldwide, rather than the immediate jump in salary that MBA graduates can expect to look forward to.

So, for the sake of comparison, how well do the region’s top five schools fare when it comes to this aspect of immediate MBA ROI? 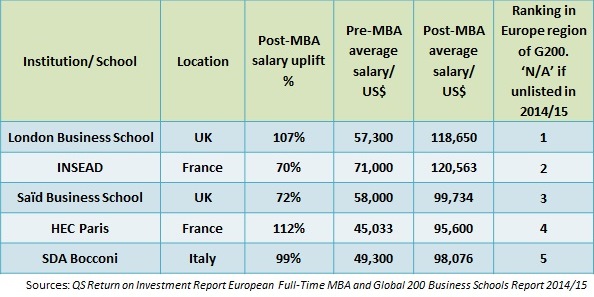 From just these five, two schools report graduates more than doubling their money on average, and one school is not far off this, with an average rise of 99%. As many of you will no doubt have noticed, one school – HEC Paris – appears in both tables. The lowest uplift reported, at INSEAD, is also the school with by far the highest average pre-MBA salary, impacting on the percentage increase.

Getting your MBA ROI off on the right track can be crucial consideration for many prospective students – particularly those who have had to heavily consider whether they could even afford to pursue the degree in the first place.

Of course, for those of you currently in this position, it’s worth noting that, for a school’s salary hike to really hold sway, you’d have to factor in how your current salary fits in with the type of class averages seen – and of course, whether your target industry and location are likely to reflect that of the MBA graduates’ average.

Salaries are often determined by the industry choices of graduates – schools known to send more of their classes to traditionally high paying industries will invariably have this reflected in their average earnings figure.

A school’s potential MBA ROI, after all, will ultimately come down to the individual and their plans for how they want to use the qualification – another factor that stresses the importance of researching your business school options and picking a school that’s right for you and your ambitions – both in the short and long term.

Learn more about the ROI for an MBA in Europe

This article was originally published in January 2015 . It was last updated in December 2015