Hoping to start your MBA in Canada next year? Here are the application deadlines you may have to meet for schools whose dates have already been released

If you’re applying for admission in the fall (autumn) of 2017 to an MBA program at a business school in Canada, the good news is that you have until May to get your application in for most of the schools on the list below. The only exceptions right now are York University’s Schulich School of Business and Laval University’s Faculty of Business. It is still early days, however, and many business schools in Canada have yet to release their MBA application deadlines for start dates in the fall of 2017.

Schulich’s round one MBA application deadline is January 15 2017, followed by a second and final round deadline of February 28. The MBA application deadline for the fall 2017 intake at Laval University’s Faculty of Business is March 1 2017 for regular admission and July 1 for late admission. Laval is the only school on the list below which delivers a majority of its programs in French (the main exception being its global MBA program). While the University of Windsor’s Odette MBA has a rolling deadline, it is recommended that domestic applicants apply on or before April 1 2017.

Since several business schools in Canada begin their programs at the start of winter or spring/summer terms, we’ve included MBA application deadlines for those intakes as well.

Deadlines shown are for full-time MBA programs, unless otherwise noted. 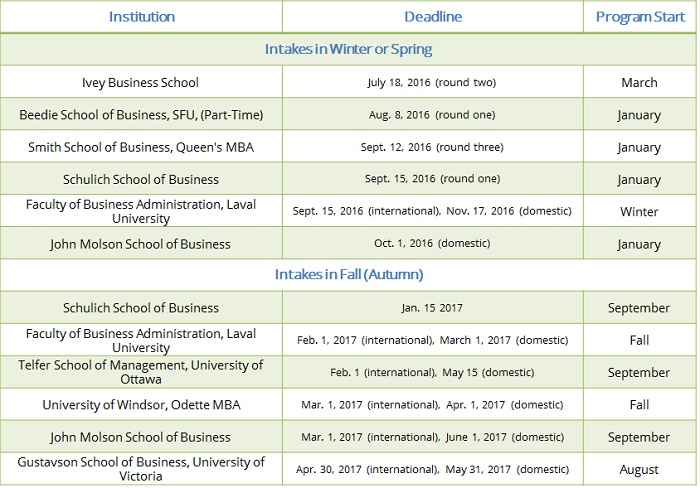 This article was originally published in July 2016 . It was last updated in June 2019

Top Tips to Get Into the Best US MBAs: Harvard Business School

Top Tips to Get Into the Best US MBAs: MIT Sloan School of Management