Are Employers Satisfied with MBA’s Skillsets?

Are employers satisfied with MBA graduates' soft skills? Do their communication, leadership and management knowledge live up to expectations?
Read the full report to find out more

As part of the Jobs and Salary Trends Report 2018, we asked employers to tell us the most important skills they look for in MBA hires, and whether their current recruits were delivering to expected standards. Understandably, employers expect a great deal of competency from business school students and while in many of the ‘hard skills’ areas candidates are delivering consistency, the same can’t always be said of ‘soft skills’.

It’s understandable, soft skills are, in many ways, more difficult to learn than harder more tangible skills. It’s far easier to teach someone how to use Excel or the basics of computer programming than how to be a good communicator, how to listen to others and how to work as part of a team. Being able to master the communicative arts takes a lot more self-reflection and willingness to adjust aspects of your own personality - something not all candidates are willing to do. A further issue is that many graduates, who are successful people in their own right and often have a great deal of work experience already, may not want to admit that they need to work on something as basic as communicating well with their colleagues. It’s this resistance, along with a lack of resources which leaves employers underwhelmed with many new hires. 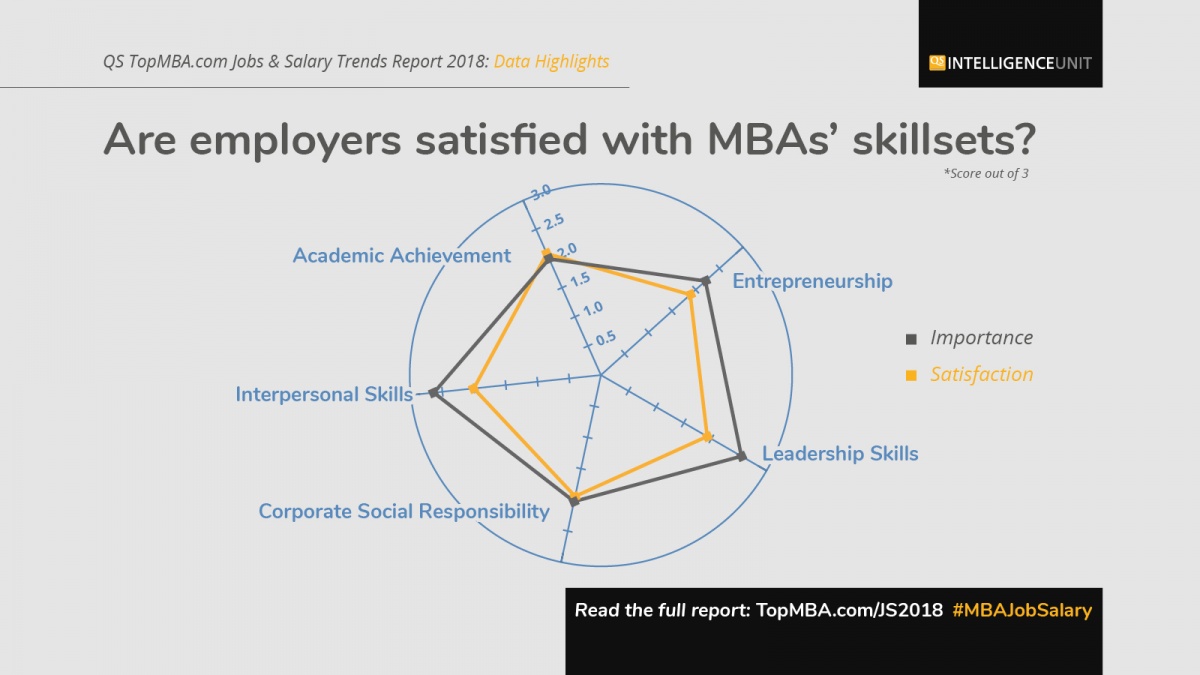 Our report shows that employer satisfaction in both interpersonal and leadership skills is significantly lacking when compared to the importance placed upon them, and it’s not just this report which has noticed this pattern. A report by PayScale and Future Workplace found that while 87% of graduates felt ready for work, only 50% of hiring managers felt this confidence was founded. They found that skills including leadership, teamwork, critical thinking and attention to detail were among the major ones lacking in new hires. Dan Schawbel, research director at Future Workplace, said, “Graduates need strong communication and problem-solving skills if they want to interview well and succeed in the workplace, because effective writing, speaking, and critical thinking enables you to accomplish business goals and get ahead.”

Another survey, from The Hay Group, found that while 93% of employers stated that soft skills were vital to commercial success, only 51% of graduates felt the same way - instead feeling that they were a barrier. The Hay Group suggests this is because academic environments necessarily focus on completion of work as the predominant goal - communication and working as part of a team isn’t as necessary as it is in the world of work. This results in graduates not understanding the importance of these skills.

On the other hand, the PayScale report found that graduates demonstrated a thoroughly adequate knowledge of hard skills such as coding and SEO. This is reflected in our own report, where more tangible skills such as academic achievement, international awareness, computer skills, language ability and marketing were satisfactory according to employers.

To succeed in the workplace then, graduates need to spend more time focusing on developing their soft skills and ensuring that they’re ready to begin working in the professional world. There are many opportunities at business school to improve these skills - such as undertaking work experience during the course, participating in extracurricular activities which focus on communication and teamwork, and analyzing areas in which your proficiency may be lacking.

Read the full report to find out more

This article was originally published in October 2017 . It was last updated in November 2017