Financial services MBA recruiters are back at the Kellogg School this year! The school’s five top recruiters by volume of new hires, however, are all consulting companies.

Recovery in the financial services

There’s a notable recovery from the financial services industry detailed in the Kellogg School’s class of 2015 employment report. After the proportion of graduates entering finance suffered a 6-point drop from 20 to 14% in 2014, that number is now back up to 19%. Indeed, last year no single financial services company took on more than five Kellogg School graduates, but three companies exceed this number in 2015 with Citi and Goldman Sachs both hiring seven and J.P. Morgan six.

It’s enough to propel the financial services back into second place among the class of 2015’s industry destinations. The technology sector, which had risen from taking 12% of the class in 2013 to 18% in 2014, is back down to 15% this year.

There’s also a healthy bump in salaries on offer to those choosing careers in finance – a rise in the median base salary from US$110,000 to US$125,000 means that the financial services are no longer paying Kellogg School graduates less than the healthcare and pharmaceutical industry, as was the case in 2014. Median salaries in the latter rose from US$110,500 to US$115,000 among the 5% of the class entering this sector. As at Michigan Ross, the salary rise within the financial services is most notable in investment banking, an area in which the median salary rose from US$100,000 to US$125,000.

In spite of finance’s recovery, consulting’s hold on those leaving the Kellogg School seems secure. As seen in the school’s list of top recruiters for volume of full-time hires, all members of the top five are consultancy firms (this was also true for all of the top four in 2014). The only others to hire more than eight graduates this year are the tech firms, Amazon and Microsoft, and the newly merged Kraft Heinz Co. which leads the way for the consumer products industry – the only other sector to register a double-digit percentage of hiring after consulting, finance and technology. Hiring from tech giant Apple, meanwhile, has more than halved from 13 to six hires this year. 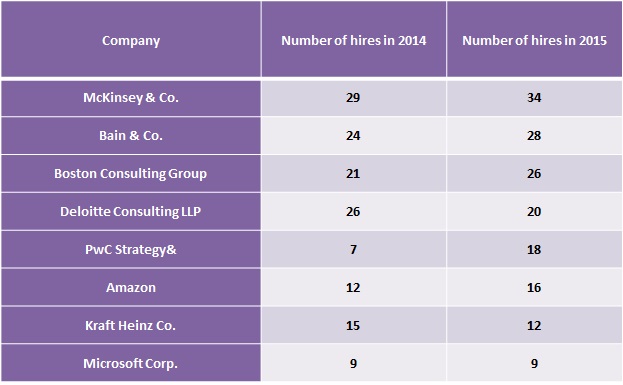 The consulting industry as a whole accounts for 35% of the class of 2015 – a proportion that hasn’t wavered from this level by more than two percentage points in any of the past five years – and comes in with a whopping US$140,000 by way of median base salary, up from US$135,000 in 2014 and matching the numbers seen at Harvard this year.

The overall median salary for the class is also up a fraction, from US$120,000 to US$123,000, with those joining the technology industry reporting a median salary this year of US$120,000.

With numbers taking jobs overseas down at both HBS and Michigan this year, it’s interesting to see this proportion rise from 13 to 16% of the class of 2015 total at the Kellogg School – even though 41% of the class joined the program from outside the US and 36% hold international citizenship. The median salary offered to those heading overseas is US$110,000 this year, the same as it was in 2014.

In the US, finance’s recovery has seen the number of students moving to New York rise from 8 to 12% of those accepting new job opportunities. However, this still puts the home of Wall Street behind both the school’s home city of Chicago (26%) and San Francisco (14%) in the job location stakes.

The new Kellogg School report also encompasses full-time students on its one-year MBA and MMM programs who graduated in 2015, however roughly three quarters of the overall class total of 635 graduates covered are traditional two-year MBAs. The school changed its method of reporting employment data for the 2014 report and therefore cautions against drawing too many comparisons with data from 2013 or earlier.

Much of 2015’s data, meanwhile, relates to the 519 students who were seeking employment, of which 92% had accepted an offer and 95% had received an offer within three months of graduation. Outside of this number, just 11 students reported being focused exclusively on starting their own business – that would be 2% of the class total of 635. By comparison, 15% of the class total is returning to their pre-MBA employers.

This article was originally published in November 2015 . It was last updated in July 2019