Studying an MBA in Europe could be your ticket to a position with top employers from around the world, but which companies hire the most from individual schools?
Take a look at international trends for MBA jobs and salaries and the industry destinations of graduates

If you’re planning on studying for an MBA at one of the leading business schools in Europe, it’s certainly worth looking into the career destinations of their MBA graduates as part of your pre-application program research.

What do the destinations of MBA graduates reveal about a school? 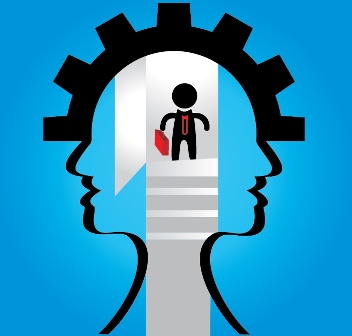 Is a particular school helping its students land MBA jobs in the sector you most see yourself working in? Does the company you’ve always wanted to join frequently appear in a school’s recruitment lists? Although these things have a habit of changing from one year to another, general patterns and a good feel of an individual school’s recruiting landscape can be gained from perusing their publicly-available employment reports.

Please note that not all of the top business schools in Europe display their employment data in the same way, making direct comparisons between schools difficult. This article is therefore intended more as a general guide to the companies who are among the most active in recruiting from Europe’s leading business schools and, by extension, of particular interest among their MBA graduates.

The top-10 employers of members of London Business School’s (LBS) class of 2014, and the number of graduates hired, are shown below: 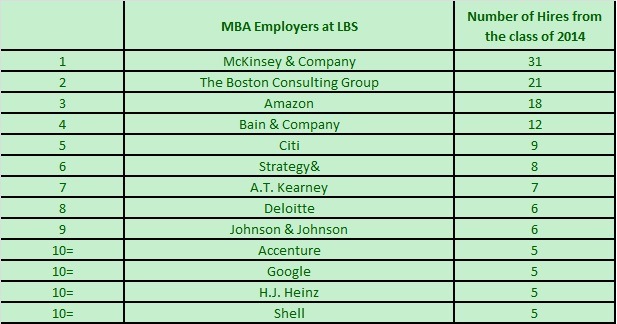 The consultancy firms, McKinsey and the Boston Consulting Group have led the recruiting charts at LBS in each of the past three years. Bain & Company and Strategy& (formerly Booz & Company) have also been fixtures in the top 10 in this timeframe, as have the finance firm, Citi, and tech giant, Amazon. Hiring numbers among each of these regular recruiters have remained consistent for the most part, with the obvious exception of Amazon, which has increased the number of MBA jobs offered to LBS graduates from five in 2012 to 18 in 2014, as shown in the table above.

The latest available information on INSEAD’s top 10 employers pertains to its MBA class of 2013 employment report and is detailed below: 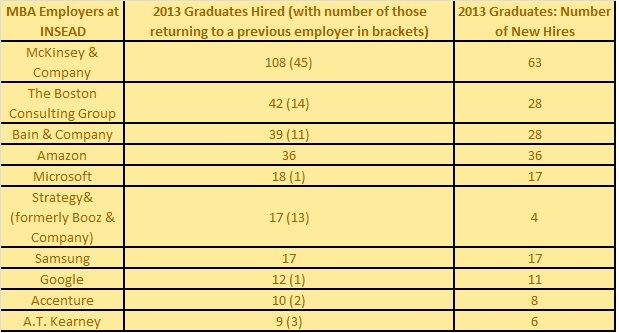 The presence of big consultancy firms in this top 10 largely mirrors that found in LBS’s current list. However, and perhaps notably for tech enthusiasts, we see Microsoft and Samsung feature in this list as well as Amazon and Google. Indeed, if these employers were to be ordered based solely on new hires, the school’s tilt towards technology, among this MBA cohort at least, is accentuated – as can be seen in the table above.

At the University of Oxford’s Saïd Business School, 15 companies are listed as having hired two or more MBA graduates from the class of 2013/14. Those firms include those we have already seen – the likes of McKinsey, Accenture, Amazon and Google, for instance - but also extends to Jaguar Land Rover and Shell Foundation.

While HEC Paris’ MBA placement report for 2014 does not contain hiring figures for each firm, it does name Amazon as its “most significant recruiter” (adding that this is a title it has held since 2011) with 10 MBA jobs taken by 2014 graduates. Aside from this, the HEC Paris report lists firms who feature among their leading employers, pointing out that while the likes of Microsoft and the World Bank Group’s International Finance Corporation (IFC) are new additions to the 2014 list, consistent suppliers of MBA jobs for its graduates since 2011 have been McKinsey, GE, L’Oréal, Schneider Electric and Johnson & Johnson.

SDA Bocconi’s class of 2014 report shows that just as many of its MBA graduates went into the luxury, fashion and retail industry as they did into consulting or technology/e-commerce – in each case, these sectors accounted for 19% of graduates (it should be noted that the school offers a track in luxury brand management). Financial services, meanwhile, attracted just 13% of the class.  The report doesn’t contain actual numbers of MBA jobs secured with individual companies, but seven firms are listed as their top employers for 2014. These companies include Nestlé and Credit Suisse as well as the Boston Consulting Group and Amazon.

IE Business School’s full-time MBA, known to the school as the international MBA, lists a selection of the program’s top employers, albeit without precise statistics, in its employment reports. For students graduating in 2012/13 and 2013/14, top employers featuring across both lists include some names already seen elsewhere in this article, such as Amazon, Citi and Credit Suisse, as well as a couple we are yet to mention, such as Telefónica, EY (Ernst & Young) and Siemens.

In its latest employment report, ESADE doesn’t single out the top providers of MBA jobs for its graduates. Instead, a wide range of companies who have engaged with the school’s career services team between 2012 and 2014 are listed. These include many of what we might, by now, refer to as the usual suspects among MBA employers in Europe today.

The MBA career statistics currently available from IMD Lausanne’s website aren’t specific to an individual cohort when it comes to the top employers of its graduates. Instead, a three-year average is taken to produce a top-10 set of employers, which are then listed alphabetically. These include DuPont and Royal Dutch Shell as well as McKinsey, the Boston Consulting Group, Amazon and Nestlé.

Companies recruiting for the most MBA jobs among IESE’s class of 2014 are listed, in its employment report, as being “top for full-time offers”. This list numbers more than 20, but includes a couple of new names – such as Mango (fashion retail), LATAM Airlines and Novartis (pharmaceuticals) – alongside the big names from the worlds of consultancy and finance, such as McKinsey, Bain & Company, Deloitte and Citi.

Rounding off this investigation into examples of top employers at business schools in Europe is Cambridge Judge.

Just six companies are listed on Cambridge Judge’s website as being the top employers of its MBA class of 2013/14 (a full list of recruiters is also available). However, within these six are a couple of names not previously encountered in this article, with the Fung Group (logistics), Infosys (IT services/consulting) and Schlumberger Business Consulting (consulting arm of the oil and gas firm of the same name) listed just below Google, A.T. Kearney and EY.