The Top 10 Countries for Post-MBA Salary Levels in 2015 | TopMBA.com

The Top 10 Countries for Post-MBA Salary Levels in 2015

Where in the world were the highest average MBA salary levels reported this year?

Where in the world are the highest post-MBA salary levels on offer to MBA graduates?

As part of the QS Employer Survey, on which the QS TopMBA Jobs & Salary Trends Report 2015/16 is based, we asked those who reported hiring MBA graduates over the past year how much they offer by way of MBA salary.

Here, then, are the 10 countries in which employers reported the highest MBA salaries, based on national averages found among the report’s survey sample of 3,952 companies in 88 countries and excluding separate figures given for bonuses. Salary levels, of course, depend on many factors, so one should take this list more as an indication of the health of MBA salaries available in an individual country than as a definitive guide. 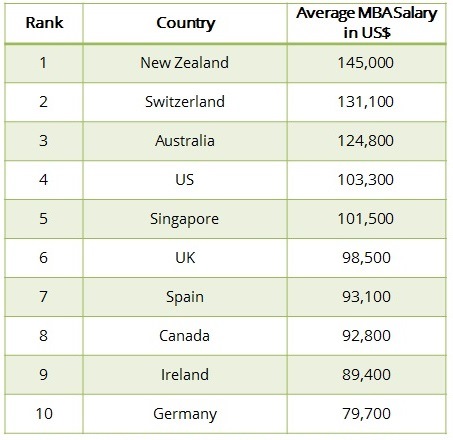 Top of the money pile this year is New Zealand. The country’s size dictates a relatively small number of respondents in comparison to the world’s larger markets, but those included in the sample had quite the tale to tell, and posted comfortably the largest basic MBA salary levels this year.

New Zealand is joined in the top five here by two other representatives from Asia-Pacific, Australia and Singapore – a surefire signal of the monetary health of MBA jobs that can be found within the region. The top five is completed by second-placed Switzerland, a traditional hard-hitter in the MBA salary stakes, and the US in fourth. Interestingly, this year’s top five also represents a cut-off point for those nations offering average salaries in excess of the US$100,000 threshold to which MBA graduates often aspire.

Of the members of the second half of the top 10, four can be found in Europe, and more specifically, the EU, with Canada occupying the solitary remaining spot.

Here are a few more points to note about this year’s top 10:

Splitting the difference between salary highs for reported MBA jobs 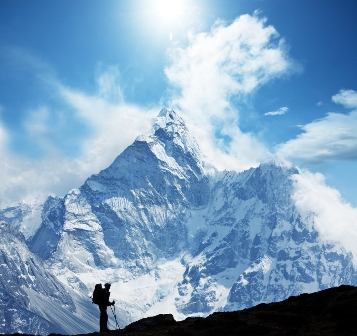 The difference between the average MBA salary reported by employers in New Zealand and those in 10th-placed Germany is a little over US$65,000. Hardly an insignificant amount of money by any stretch of the imagination, but what can one buy or do with this approximate amount of money?

Average salaries for MBA graduates in countries outside the top 10

There’s no place for countries either in Latin America or Africa & the Middle East in this year’s top 10. When excluding countries that didn’t meet a certain threshold for their number of employer respondents, Colombia reports Latin America’s highest MBA salaries this year, at an average of US$68,200. In Africa & the Middle East, this honor goes to the UAE, where employers posted average MBA salaries of US$66,300.

Lastly, here are a few more average post-MBA salary levels seen in countries notable for their popularity among prospective MBA students, or for the sheer number of MBA job opportunities available within their borders. Here, it’s worth bearing in mind differences in living costs and the varying in-county market norms when it comes to salaries offered by local employers and those achieved by MBA graduates of local institutions that are not always among the world’s most highly-rated.

This article was originally published in November 2015 . It was last updated in February 2018

How can studying a Weekend MBA boost your career prospects?