Why MBAs Should Teach Digital Storytelling According to Tech Expert | TopMBA.com

Why MBAs Should Teach Digital Storytelling According to Tech Expert

Since the late 90s, technology has played a major part in our daily lives. From the invention of the first iPhone to 4G networks and the growth of AI, the way we do things has evolved alongside technological innovations, bringing tangible benefits to society.

“Digital engagement is rewiring our brain to be faster, more visual and shallower. And the situation is escalating more and more,” said tech expert Stefano Marrone.

Aside from being passionate about technology, Stefano always understood its role in the business landscape. This led him to found the award-winning tech marcomms agency Nucco Brain, which produces digital creative content for B2B brands.

However, despite his impressive achievements, Stefano’s career didn’t start in the business world. Entrepreneurship was something he learned “along the way”.

From design to business

In 2011, after graduating with a BA in Media Design and Multimedia Arts from NABA in Milan, Stefano worked with big advertising groups to deliver successful publicity campaigns. However, following his move to Vancouver to work in the entertainment industry, he suffered from physical health complications that forced him to abandon his job as a designer and revamp his career.

He said: “I was struggling. I felt discouraged because I wanted to continue working, but I needed a visa to stay in Canada. I realized that I couldn’t make money in a creative way anymore, but that I could still retrain myself and learn to manage other creatives.”

Stefano decided to move to the UK and study Creative and Cultural Entrepreneurship at Goldsmiths University of London, where he learned more about the importance of having a business mindset. 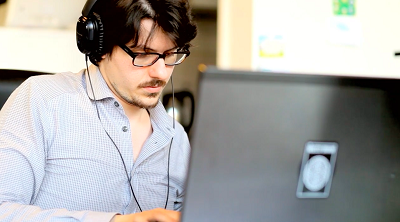 He said: “I realized that an entrepreneurial mindset is way more useful than hardcore skills, and I felt like I always had an entrepreneurial spirit myself. I never refused a challenge and always found a way to do it. Entrepreneurship comes out of you.”

After finishing the course, Stefano began working as a lead designer for a start-up, where he managed a team of 12 people. In 2013, he founded his own company – Nucco Brain.

He said: “My goal was to be able to provide myself with some freelance support and just get a decent salary out of it. But at the end of our first year we were seven employees and got our first TV advertising gig, and in 2017 I sold the majority of shares to UNIT9 Group, which recently won production company of the year and tech company of the year. It was a journey.”

After setting up Nucco Brain, Stefano realized there was a gap in the business market. While there were plenty of firms creating compelling content for B2C brands, other types of companies suffered from what he calls “dull” communication.

He said: “Our goal is to make seemingly complicated content engaging using technology and visual storytelling. It’s very easy to make Nike, Adidas or Chanel sexy, but how do you make something that seems dull interesting?

“The answer is by applying communication and digital techniques that make marketing fun, like augmented or virtual reality. I think there is a fundamental misunderstanding nowadays that just because you’re a serious business, you deserve boring content.”

So far, the Nucco Brain team has worked with a wide range of top-tier firms, including McKinsey & Company, J.P. Morgan, HSBC, Visa, Google, Deloitte, John Lewis Partnership and the European Space Agency, to help them communicate effectively on a corporate level.

But Stefano swiftly realized there was another untapped market to focus on: universities and business schools.

He said: “I think for too long we’ve engaged with education in a Victorian way. But at the end of the day, people engage with stories, and that’s what they want. The winner is whoever manages to engage with those who are born in the digital era.”

Stefano is currently working with Southern New Hampshire University and Arizona State University to develop game-based courses where students can learn by interacting with a VR-powered story. He has also held guest lectures at a number of b-schools, including UCL School of Management and ESCP, where he’s taught the importance of design and marketing in the start-up world to MBA and EMBA students.

Most recently, he represented Nucco Brain at UCLA Anderson’s Global Access Program, where EMBA students help businesses develop strategies to succeed in the American market – an experience he says is extremely useful.

He said: “I’m a massive fan of engaging with MBA programs. MBA students are thorough, they have a genuine hunger for knowledge, and you can have a great business exchange with them. We’re now following the UCLA students’ advice in terms of a go-to market strategy to open an office in New York. It’s great.”

In the future, Stefano hopes to continue championing digital storytelling in the business world. He says the Covid-19 pandemic has increased brands’ trust in technology, which he believes will lead to a “boom” in conversations about the necessity for engaging digital content, both in the business sector and in business education.

He said: “Storytelling is old, but if you manage to merge it with technology you get the best results. If you can teach things more intuitively and visually, I don’t see why you shouldn’t. I think it’s only good to shake things up a little.”

This article was originally published in July 2020 .