Career Prospects for Graduates of an MBA in Beijing | TopMBA.com
Sponsored

Career Prospects for Graduates of an MBA in Beijing

Finance, technology, sports management; there are a plethora of career paths open to those who study an MBA in Beijing

Beijing leads a string of four cities in China that currently sit atop the Schroders Global Cities 30 index; a measurement of how attractive a city’s economy, infrastructure and population is to real estate investment. This new index provides just one of many indications of China’s growing importance to global markets and, indeed, that of its capital city.

Beijing - the new billionaire capital of the world

In 2016, Beijing also overtook New York as the city that is home to the most billionaires in the world (according to the Hurun Global Rich List) and retained its position in the top 10 of A.T. Kearney’s Global Cities Index – in which measurements of business activity and human capital each account for 30% of the overall score and in which Beijing currently stands ahead of the likes of Seoul, Sydney and San Francisco.

It should therefore come as no surprise that there’s a wealth of career opportunities open to those who choose to study their MBA in Beijing. 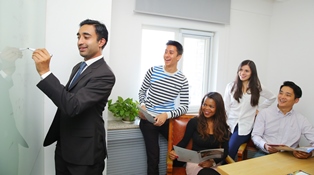 Approximately 80% of Beijing’s GDP is reported to have stemmed from its service sectors in 2015 and the largest share within this bracket, of 17%, came from the city’s finance industry. This is the sector into which 44% of MBAs from the latest class at Peking University’s Guanghua School of Management have taken their first jobs after graduating from the program.

The majority of finance and private equity firms in China, both domestic and international, are based in Beijing. If this is where your career ambitions lie, then this fact alone might solidify your choice of where in China you wish to study your MBA.

The high proportion choosing the finance industry after completing an MBA at Guanghua certainly points to the number of job opportunities to be found in finance. But, it's also an indication of the school's strength in this area and the strong connections it enjoys to the city's major finance employers.

Of course, the finance industry is not the only career path open to graduates of an MBA in Beijing, as Douglas Coulter, a professor specializing in finance, accounting and business strategy at Guanghua explains: “The reforms of the state-owned industries are a major aspect of what is happening in China today.” Coulter, an MBA alumnus of both Harvard Business School and INSEAD, is referring to changes introduced by the Xi Jinping administration that are designed to transform China’s economy and boost its competitiveness overseas. They target China's 106 nonfinancial state-owned enterprises (SOE or ‘guoqi’) and are increasing business possibilities across a number of key sectors, such as petroleum, electricity and automobiles.

In addition, there is the technology industry. Guanghua School of Management is based just a stone’s throw away from China’s answer to Silicon Valley, Zhongguancun and almost a quarter of its latest graduates have taken up jobs in technology. “I would say all of the new efforts in developing higher technology across many industries are a key area and [one that] is moving very rapidly,” says Coulter while noting the importance of, “advances and innovations in internet industries.”

There’s direct evidence of technology’s wider applications in the crossover between internet services and the finance industry. This is seen most clearly through opportunities in a fintech scene that has grown rapidly in China. Here, developments have been led largely by domestic tech giants such as the Beijing-based company, Baidu. It’s worth noting, for example, that the use of mobile payment applications in today’s China, through services such as Alibaba’s Alipay, far exceeds its usage elsewhere in the world and the technology that makes this possible is more advanced as a result.

Outside of finance and technology, there a number of other industries in which recent developments in China warrant the attention of any MBA who is serious about understanding the global context of the field in which they wish to work after their degree.

The sports industry is just one of these. In a country which, according to a 2015 report from Credit Suisse, is now home to the world’s largest middle class, interest in sport has exploded and this is presenting numerous opportunities for sports-related businesses and investment. For example, Chinese football (soccer) clubs have frequently made headlines in Europe for their investment in leading playing talent over the past year, with a record-breaking deal of approximately US$63 million taking Oscar from Chelsea to Shanghai SIPG just the latest highlight among these.

The commercial potential of the Chinese Super League as a whole was perhaps best underlined in 2015 when a five-year contract for broadcasting rights to its games was sold for around RMB 8 billion yuan (c. US$1.2 billion), up from an estimated RMB 370 million (c. US$54 million) in 2013.

Investment in football, and the sports industry as a whole, has now become a central part of China’s plans for future economic growth. The government has set the industry a target of accounting for 1% of China’s GDP by 2020 – or RMB 3 trillion (c. US$435 billion) – up from its current share of 0.7%. (The sports industry in the US is currently thought to be worth about 2.5% of GDP, by way of comparison.)

Guanghua School of Management is well aware of the opportunities these developments can offer MBAs and launched two new initiatives towards the end of last year. In November came news of a joint program offering which, from fall 2017, will allow students to study for a year in each of Beijing and New York by combining a Guanghua MBA with a master’s degree in sports management from Columbia University. This was followed up in December with the signing of an agreement with FC Barcelona and its education platform, FCB Universitas, to work together on providing programs that can help produce the management talent needed to develop China's growing sports industry. Central to this is to be the creation of a Beijing-based sports management center and hub for knowledge and innovation.

"China is prioritizing football and sport more generally, in order to improve their citizen's quality of life and make the most of the potential of their enormous population," Dr Jordi Monés, a director at FC Barcelona and FCB Universitas commissioner said when announcing the agreement. 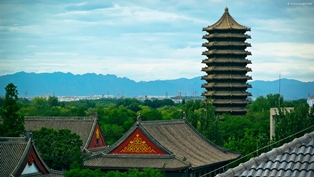 Studying an MBA in Beijing doesn’t mean one has to work in the city, or even country, thereafter. However, 70% of Guanghua School of Management’s recent graduates have chosen to start their post-MBA careers in the Chinese capital, with 13% opting to take positions elsewhere in China and just 17% outside the country. These figures stand as testament to the number and variety of opportunities open to MBAs in Beijing. The rewards, in terms of financial compensation are there as well. More than half of Guanghua’s latest class picked up a graduate salary in excess of RMB 300,000 (c. US$44,000) and 23% are making over RMB 500,000 (c. US$73,000).

Another factor to consider here is that Guanghua looks primarily for international MBA students who want to develop a career in China, or to help connect the country with the wider world. "Many more than you might think wish to continue to work in China," says Coulter of the school’s international students, before cautioning that, "knowledge of the country and the language is essential for anybody with serious ambitions."

This is why studying an MBA in China promises to be of more use than learning of developments taking place in the country from the outside. When I ask Coulter about the difference between the reality of living and working in Beijing as compared to what prospective international students might have learned and read about outside the country, he replies emphatically and succinctly that, "there is no comparison. Press reports abroad consist primarily of well-established clichés."

When it comes to language requirements, attaining a certain proficiency in Mandarin is required to successfully complete the Guanghua MBA. With these two obstacles taken care of, graduates of the program should then find it relatively easy to secure working visas, according to assistant dean and finance professor, Longkai Zhao, assuming they already hold at least two years of work experience prior to enrolling in their MBA.

If you’re currently thinking about where you want your MBA degree and subsequent career to take you, the number of potential avenues open to those who pursue an MBA in Beijing suggests that many more students will opt to study in this global powerhouse in the coming years.

This article was originally published in January 2017 .