Consulting continues to be the top industry destination for MBA graduates of London Business School (LBS), standing comfortably ahead of finance, according to the school’s class of 2015 employment report. Technology, meanwhile, now accounts for 20% of post-MBA job offers accepted by the class with around 7% reporting that they are starting their own business.

In the medium-term, finance has lost popularity at LBS. Having taken almost half of the class in 2007, the number slipped to as little as 28% by 2013. However there has been a levelling out, with 2014’s figure matching 2013’s and now a single percentage point drop to 27% for 2015’s graduating cohort. Within the industry, there were notably fewer MBAs choosing careers in investment banking (8% as compared to 12% in 2014) with increased interest in private equity and venture capital compensating for much of finance’s losses in this respect.

This means that consulting continues to be the most popular industry destination for LBS MBA graduates – a position it has held since 2011. One in three members of the school’s latest class has signed up to join consultancy firms, with the big names of McKinsey and the Boston Consulting Group standing tall at the top of London Business School’s latest list of top hirers by volume.

Technology, meanwhile, has now upped its stake to one in five of the LBS MBA class total – a rise on the 16% proportion it accounted for in 2014. As well as Amazon retaining its place as the third-largest hirer of graduates by volume, there’s a notable jump in hiring from the school by Microsoft this time round, as you can see in the table below. 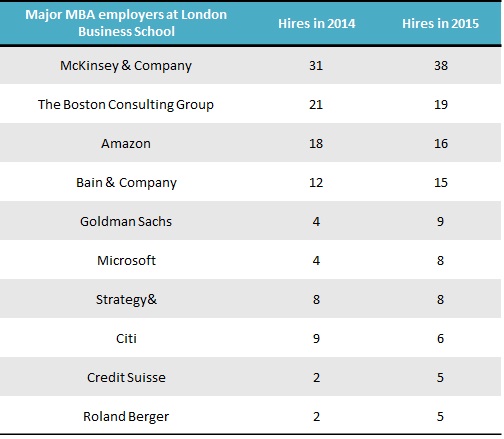 48% of class accept post-MBA job offers outside the UK

Only 11% of London Business School’s class of 2015 hailed from the UK originally, yet 52% have accepted a post-MBA job offer in the country. However, that does mean that the number of LBS MBA graduates traveling overseas with their degrees is considerably higher than the proportions seen among US business schools. Given its proximity, the rest of Europe is unsurprisingly the region to which the next highest number of graduates has been drawn, accounting for 13% of the class of 2015’s job locations. However, this is matched by the number accepting post-MBA job offers from companies in Asia.

Of course, the number of students who joined the program from Europe (outside of the UK) and Asia did represent 26 and 22% of the total, respectively. Even so, the school believes the dedicated career fairs for the Asia region it runs in conjunction with other European schools, such as IESE and HEC Paris, have had an effect on students’ interest and access to MBA job opportunities in Asia:

“Asia as a graduate destination is growing in popularity. This year we hosted the third annual, joint European business schools, Asia Careers Fair at London Business School, inviting employers across all sectors to give our students a real insight into the Asian market,” said Lara Berkowitz, executive director at the school’s career center.

MBA salaries for those entering the technology industry aren’t quite as high as this, on average, and stand at a median of £73,000 (US$$114,041) for the school’s latest graduates.

Three months on from graduation 93% of LBS MBA graduates had accepted a full-time job offer. The number starting their own business right after the degree, meanwhile, represents 6.7% of the total number of graduates, a figure that is consistent with the 6.5% proportion reported in 2014 and one that puts the school on a relatively even keel, in the entrepreneurial stakes, with the likes of Harvard Business School and MIT Sloan.

This article was originally published in January 2016 . It was last updated in June 2019