The Top 10 Countries for Post-MBA Salary Levels in 2016 | TopMBA.com

The Top 10 Countries for Post-MBA Salary Levels in 2016

A snapshot of MBA salaries and graduate recruitment around the world

To answer this question, we can look at the recently released QS TopMBA Jobs & Salary Trends Report 2016/17, which provides a snapshot of MBA salaries and graduate recruitment around the world.

Based on national averages among the 4,093 companies in 102 countries who responded to the annual QS Employer Survey, here are the 10 countries in which surveyed employers reported the highest starting MBA salaries. Do take note, however, that this list is not a definitive guide, but rather an indication of the health of MBA salaries around the world. It’s also worth bearing in mind that these figures do not encompass the bonus levels that many graduates can also look forward to receiving! 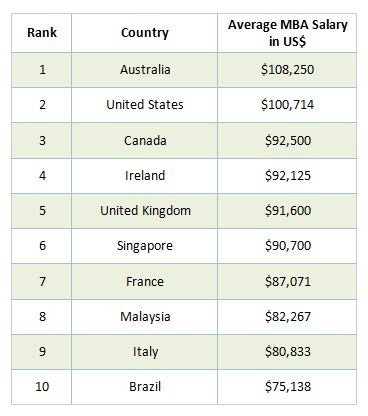 This year’s leader is Australia, offering an average MBA salary of US$108,250, and sits well ahead of the world’s three most popular MBA study destinations (according to QS’s 2015 applicant survey) – namely; the US, UK and Canada. Ireland also makes a strong showing in fourth place, offering average MBA salaries almost congruent with those on offer in Canada.

This year’s report provides further evidence of the strength of the most established markets for MBA jobs, with the US and Canada making a top 10 showing again this year (at second and third place, respectively). In Canada, average base MBA salaries come in at just over US$92,000, with those in the US surpassing the US$100,000 threshold. These two countries along with the UK, Ireland, Australia and Singapore have all made this top 10 two years in a row.

Some surprises and firsts among the top countries for MBA salaries

Employers in Western Europe may have reported an overall drop in reported salaries year-on-year in this edition of the report, but the MBA salaries on offer in France and Italy are still high enough to make this years’ top 10.

Malaysia enters the top 10 this year – in 8th place at US$82,267 and ensures that Singapore is no longer the only representative for Asia-Pacific in this top 10. Outside the top 10, MBA salaries reported for China and India are almost even, behind the levels on offer in Japan, yet, somewhat surprisingly perhaps, ahead of those reported by employers in Hong Kong. To see which of these countries made the top 20 for the MBA salary levels they reported this year, please download the report in full.

Brazil gives Latin America a spot on the top 10 list this year, with surveyed employers there offering comparatively high returns for graduates given its relatively low cost of living compared to some of the other members of this top 10.

Of course, there is some value in reviewing the survey data based on regional findings rather than country specifics, as these often provide a wider picture. For example, this year’s report found that MBA salaries are on the rise in the world’s younger regional markets for MBA jobs - with the biggest boost seen in Latin America, which saw a year-on-year average MBA salary increase of 35% after a deep dip last year. This, along with Brazil’s position this year in 10th place, signals the potential promise ahead for the Latin American MBA job market – even if we must proceed optimistically with some degree of caution, given the region’s fall in average MBA salary levels seen between 2014 and 2015.

The financial return on investment (ROI) of an MBA plays a large role in prospective students’ consideration of pursuing the degree. As such, post-MBA salaries can often be the key determinant of where to study as well as where to launch their post-MBA career and this is why QS strives to provide a valuable benchmark for the MBA job market through its annual reports into MBA jobs and salary trends.

This article was originally published in January 2017 . It was last updated in June 2017