Just how much more do European MBA graduates stand to earn, compared to those without the degree, some 20 years from now?

An MBA isn’t just for Christmas, or Hanukah, or Diwali…or any singular festivity at which you might celebrate your newly-acquired MBA job. It’s a qualification that should leave tangible effects on MBA graduates’ career paths for the rest of their professional lives.

So, while we’ve already taken a look at the return on investment of an MBA (MBA ROI) from short-term perspectives, such as the time it takes to pay back a program’s tuition costs and the uplift in salary MBA graduates can expect to look forward to, what about the long view on how an individual’s MBA ROI might play out?

In the course of carrying out their research into the ROI of a full-time MBA taken at any one of 46 business schools in Europe, the boffins at the QS Intelligence Unit did just that – assessing how much more you might expect to earn over a 10 or 20-year period, if you had an MBA degree behind you.

For a look at MBA ROI 10 years on, see the report. But, for a glimpse at what the year 2035 may bring if 2015 were to see you graduate from any of the report’s featured business schools in Europe, you can stay right where you are.

Before we go any further, it has to be said that the crystal ball detailing MBA ROI figures some 20 years hence can never claim to be crystal clear – there are just too many variables that even the best of researchers cannot predict with precision over that amount of time – the implications of the region’s changing economic outlook, for one.

Still, the aim is to provide a decent estimate – allowing for a margin of error to around 20% - of how the income stream of MBA graduates compares to those without an MBA, with figures that simply show how much more you might expect to make with 20 years of an MBA-propelled career behind you. Spoiler alert: It’s quite a lot more.

Here’s how the MBA graduates of 20 business schools in Europe got on – namely, the top 20 for the difference in income generated 20 years after completing their MBA (as a disclaimer, this is a simple table, not taking into account the many different variables which might come into play or any pre-MBA factors and shouldn’t be considered a definitive ranking): 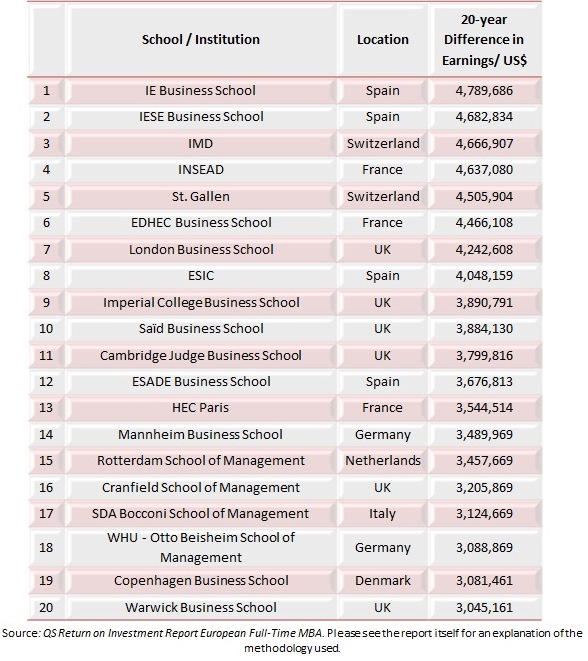 The table of 20-year MBA ROI is, by this calculation, led by two Spanish business schools, with two Swiss institutions also featuring in the top five. The top two business schools in Europe as per QS’s latest regional rankings, London Business School and INSEAD, come in at seventh and fourth respectively.

The average difference in earnings among these top 20 business schools in Europe is US$3.9 million, a whole million more than the US$2.9 million figure one receives when assessing the average of all 46 schools analyzed by the report. However, the gap between first (IE Business School) and twentieth (Warwick Business School) in this reckoning is a little over US$1.7 million.

Can any conclusions be made about particular destinations of study? Well, the included representatives from Spain, France and Switzerland all provide an average that is notably higher than the total average of US$2.9 million – a sum that is attained by Germany’s representatives. Schools from the UK, meanwhile, register an average a little below this, at US$2.66 million, although the UK has by far the most institutions (18) included in the sample – which brings down the average recorded by the six schools that feature in this top 20.

This article was originally published in February 2015 . It was last updated in August 2016

Why Get an MBA Degree?

Career Change and the MBA

Why Get an MBA Degree?