Benjamin Fernandes, a Stanford GSB graduate and Africa MBA Fellow, landed an internship at the Bill & Melinda Gates Foundation last summer, despite not making the organization’s initial cut for interviews

“This is exactly why I came to business school,” says Benjamin Fernandes, a newly minted graduate of Stanford GSB, as he recalls the argument he made during his MBA internship interview. “To be put in situations exactly like this.”

Except, this wasn’t really an interview. Benjamin wasn’t shortlisted by the Bill & Melinda Gates Foundation because, entering one of the world’s leading MBA programs at the age of just 22, he didn’t fulfil the depth the breadth of experience normally required of participants in its MBA internship scheme. Undeterred, he showed up at the campus interviews anyway and was graciously granted a minute in which to state his case.

Landing an MBA internship at the Gates Foundation

His impassioned words that day were not lost on the Gates Foundation recruiter and, a few days later, he was catapulted into a sink-or-swim chance to impress in the MBA internship scheme’s third round of interviews. Impress he did and, after interviewing with a few more people, Benjamin was offered the internship slot he had sought.

A summer internship is an integral part of the business school experience for many, albeit one that takes place off campus. Nestled in between the first and second year of a two-year program, these placements allow students to apply newly acquired skills to real-life settings, and to trial potential new career paths and employers. Many wind up with offers to return to their MBA internship employers once they graduate (around 10% of Stanford’s class of 2016 accepted offers with their summer employers, although the equivalent proportion was 38% at Michigan Ross, for example). However, first you have to land an internship spot and, as Benjamin found out firsthand, the competition can be fierce.

From Tanzanian TV to Stanford GSB 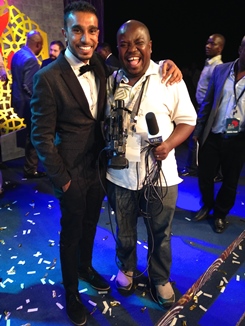 Still, you don’t get into Stanford GSB at the age of 22 without having some substance behind those early signs of promise. Top of his class at undergraduate level, Benjamin Fernandes was the recipient of a Stanford Africa MBA Fellowship – an initiative covering two years of tuition at the school and therefore worth around US$160,000. He’s also a renowned television personality in his home country of Tanzania since co-anchoring coverage of the 2012 Olympics at the age of just 19. Since then, he has also anchored coverage of the 2014 World Cup in addition to hosting talk shows looking at some of the challenges facing Tanzania’s youth.

In spite of those experiences, Benjamin admits to feeling a little in awe at the ages and experiences around him when he first arrived at Stanford GSB. Fortunately, he found classmates eager to set him straight. “One of my classmates said; ‘you should own the fact that you’re 22 because it took me seven years to get here. It took you one, and you should be proud of that.'”

A sense of class camaraderie, in which no single person values themselves more than any other, stands out among the many highlights of Benjamin’s MBA experience. “That humility and willingness to learn is so infused in the air,” he enthuses. Then there’s the opportunity to travel and learn about the world. “I’ve travelled to 16 countries in a year and a half – it’s a little crazy.”

Scooping US$20k to help build a digital bank in Tanzania

While many choose to study in the country they wish to work in thereafter, Benjamin is adamant that his future lies in Tanzania. “I’m not just sitting up there in the US. I’m representing my nation,” he explains candidly, pointing out how rare it is for young Tanzanians to get the same breaks he has benefited from. “The statistic is something like only 38% of Tanzanians go to secondary school [figures from UNESCO suggest that the number enrolling in secondary education in 2013 might have been even lower than this, at 32%]. It’s an even tinier percentage that get to go abroad.”

The Africa MBA Fellow is currently weighing up a job offer that he believes will provide valuable experience for his future ambitions of taking on a governmental role in Tanzania. “My next step would definitely help me get back to Tanzania and the experience I’d gain from that position would, in the future, help me with my potential running for government,” he says. 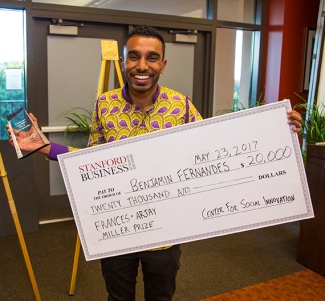 Before that, however, Benjamin wants to launch a fintech startup designed to widen access to financial services in Tanzania.

“The reason I’m interested in financial services is because I believe we have smart people in Tanzania…and financial services or access to capital to build businesses is something that’s missing. Banks don’t trust people, banks give them high rates for loans and people kill the business plan before it’s even started. There’s a whole cycle of struggle that people face,” he says in reference to a project that recently landed him a stipend of US$20,000 when he was awarded this year’s Frances and Arjay Miller Prize in Social Innovation at Stanford GSB.

Becoming East Africa’s largest digital bank by reaching its ‘underbanked’ population is the overriding aim of the startup. The IMF reported last year that only a third of adults in sub-Saharan Africa have access to any kind of basic financial services, so the market is substantial. But, there’s a second issue Benjamin’s keen to address. “My goal is for a majority of the profits from the financial institution to be used to fund educational programs in the rural regions of Tanzania,” he explains. Primary education is still only reaching around 82% of the population, according to 2015 figures from UNESCO, while an opinion piece in Tanzania’s The Citizen expressed concerns at the start of this year over the country’s ‘worrying trends’ in education.

Such plans make it easier to see why Benjamin drew the attention of the Stanford Africa MBA Fellowship’s selection panel and its stated goal of supporting, “leaders committed to making an impact on the continent.”

The fellowship commits Benjamin to return to work in Africa within two years of graduation – the interim allowing him to gain further skills, experience and, crucially, funding. Thus far, finding finance for the startup hasn’t all been plain sailing – there’s been frustration with investors who consider projects in Africa to be ‘high risk’ and have offered low valuations and meagre terms as a result. “A lot of the big VC [venture capital] firms have never invested into Africa. I think impact investors are friendlier to African projects than VC firms; a big challenge I experienced was because exit options are limited.” he reasons.

As well as facing up to investment firm realities, this Stanford graduate has now also gained an insight into the machinations of the MBA recruitment process. His diagnosis? While the school name enjoys a formidable cachet with many, outside perceptions can still be misleading.

“A lot of people assume that because this person went to Stanford GSB they’re going to get every job they apply to…I’ve been rejected for more things in the last two years than I have in my entire life,” he confides, adding that he believes this is healthy because an expectant mindset would be a very dangerous thing for graduates to have.

Even so, Benjamin says he has experienced some preferential treatment at networking events, when compared to those representing good schools, but from outside those considered the absolute crème de la crème.

“There are organizations that will put extra effort into trying to recruit Stanford business students and I don’t like that at all. People put us on this pedestal,” he says before telling the story of how one recruiter made a point of letting the Stanford student know how high its salaries were at a mixer he attended with Gates Foundation colleagues during his MBA internship. When he questioned her motives, Benjamin says that the recruiter paid tribute to the school’s MBA admissions process and its famously low acceptance rate. “She said she believed that Stanford and Harvard admissions teams are the best recruitment firms in the world because they filter down from 8,000 to 400 people.”

Cachet aside, there is also a suggestion that life in a leading MBA program is so enjoyable for its members that it becomes difficult for life in the real world to meet the same standards. Benjamin believes that the wealth of career options to which Stanford’s students are exposed can lead to serious scrutiny, where students ask themselves ‘is this something I really want to do?’

“You go from being in such a place where you meet the CEO to being a regular employee at a company and I think that transition is hard for some people,” he adds. Some, like the graduates behind rocketMBA, have found ingenious ways to keep aspects of the b-school experience alive.

“If somebody likes you, they’re going to help you” says Africa MBA Fellow 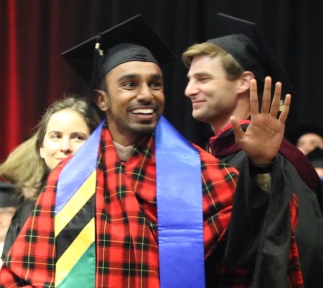 Whether he’s speaking about the nuances of MBA recruitment and campus life or simply his love for Tanzania and football (soccer), there’s a refreshing honesty about Benjamin Fernandes when he talks about his hopes and ambitions and it’s impossible not to warm to his level of enthusiasm. Should he fulfil his ultimate aim of entering politics, a straight-talking nature could certainly serve him well, as the Guardian’s view of recent general elections in the UK suggests.

After all, the words and deeds of today’s leaders are openly challenged across a myriad of media and individual hypocrisy is well documented – and this applies to big business as much as it does to politics. Perhaps this is why MBA employers value communication skills so highly.

Communication leads the way when I ask Benjamin what he feels the most important characteristics a person needs to succeed in life are. “I think the strongest one is the ability to build relationships with people,” he says. “If somebody likes you, they’re going to help you.” His MBA internship experience last summer offers a useful illustration of this point. Working within the Gates Foundation’s digital technologies team, Benjamin also got to know its financial services team. “I took time and I’d find all my gaps during the day and I’d try to meet people and chat with them…My internship was only supposed to be 10 weeks long but, because I knew the financial services team, I got the opportunity to stay on for one more month and the last month I worked with the financial services team.”

“The word ‘grateful’ can’t justify how I feel right now. Stanford GSB has been by far the most transformational two years of my life – I’ve grown, learned and been challenged in so many different ways, and I couldn’t have asked for better than to share this journey with my fellow classmates. There are so many thank yous that I owe to people who have helped me since childhood. My faith is the most important thing to me and is the reason I am standing here today…The end of one journey marks the beginning of another one.”

This article was originally published in June 2017 .

You've Got the MBA Internship, Now What?

MBAs Need Soft Skills and Adaptability to Thrive in 2021

B-Schools Weigh In: 2021 Will Be a Year of Recovery for MBA Grads

The World’s Most Popular MBA Internship Opportunities in 2020